In parallel to the liberalization[1] process in electricity market, the natural gas market has also undergone a tremendous reform process at the outset of the first decade of the new millennium and Natural Gas Market Law[2] was enacted in 2001 to lay the foundations for the reform and restruc­turing process. The objectives of the new legal system includes establishing a competitive natural gas market, reduce the share of state-owned enterprises within the market, and harmonization of the domestic legal framework with that of EU's.

The new market framework includes rules regarding the transparent market entry conditions as well as non-discriminatory TPA to the gas infrastructure and the extension of EMRA's responsibilities to cover regulations in natural gas market as well. Considerable steps have been taken to establish a truly competitive gas market thanks to enactment of the secondary legislation and its implementation by EMRA. It is confirmed by IEA that the domestic rules and regulations are in compliance with the EU directives although there are some delays in reducing BOTAŞ's market share and dominant position (IEA, 2010).

In the wholesale stage, imports have been partly liberalized, contracts of state-owned conglomerate incumbent BOTAŞ have party been transferred to the third parties, expiring contracts have been renewed by private sector and LNG imports have been totally set free. Although prices are not being regulated, BOTAŞ still plays a crucial role in the wholesale market with its dominant position and its sole ownership in national grid. Third parties access to the grid has been secured by non-discriminatory access rules.

Natural gas plays a particularly important role in power generation: In 2014, almost 48% of total gas demand was used in gas-fired power plants (EMRA, 2015). That is, natural gas and electricity markets in Turkey have become inexorably intertwined. The expected grow in electricity demand is likely to increase the gas demand as well and in order to get the growing gas demand met, huge levels of investments are required such that vast amounts of gas has to be imported and shipped to Turkey just before marketed to the final customers.

In addition to its growing use in power generation, natural gas has also become increasingly available for district heating and other household consumption. Especially after the enactment of Law 4646, EMRA has successfully imple­mented a unique auction model in order to expand the usage of gas in district heating. Thanks to this model, as of the end of 2014, auctions have been completed for 65 regions and together with the existing 7 regions that already had gas supplies before the enactment of the Law, 69 companies in total have been granted distribution licenses by EMRA to conduct natural gas distribution and retail sales activities in their respective regions and in 71 of them natural gas service has already started. Overall, natural gas is being supplied in 71 out of 81 provinces of Turkey. As of the end of 2014, total number of households customers supplied with natural gas has reached 10.758.400 within these 71 provinces (EPDK, 2015). 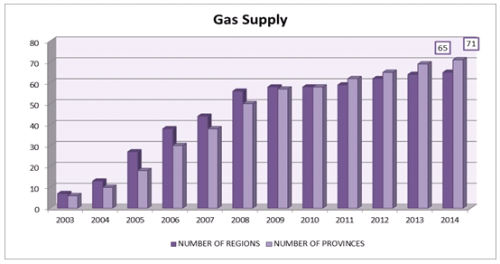 The selection of the companies of franchise is done through competitive biddings. Candidates bid on the basis of their margin (BHAB) on gas purchase price and the gas purchase price is pass-through subject certain restrictions. BHAB remains constant during the first eight years and set by EMRA for the remaining duration based on price cap methodology. 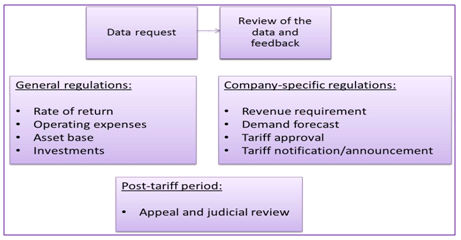 Eight years period for auctioned regions are coming to their constant tariff periods gradually and approval of the tariffs for the consecutive years is one of the hottest topics in Turkish natural gas market. In 2011, EMRA introduced the tariff methodology for natural gas distribution companies and the uncertainties for the future disappeared to a great extent.[3]

Cost of equity is calculated by taking into consideration risk-free rate, market return, market risk premium and components of beta coefficient. In this scope, the system usage fee is calculated based on the revenue requirement (as a product of calculated rate of return) and the demand forecasts.  As a rule of thumb, 22-year depreciation periods are applied in terms of the useful life of the investments and time series analyses is conducted for demand forecasting.

Out of 23 companies for whom the eight years period has expired in 2013 and 2014, for 18 of them the tariffs have been approved by EMRA. For the remaining companies, tariff approval process will be carried out at the end of their constant-tariff period.

A quick look at to the ownership structure of the distribution regions one can observe that Aksa Enerji Group (20 regions), Enerya Enerji (9 regions), Akmercan Doğal Gaz AŞ (7 regions) and Kargaz (2 regions) are undertakings operating in more than one region. Kayserigaz (EWE), Bursagaz (EWE) and Enerya (Partners Group) are the ones with foreign partners. The largest distribution region, İstanbul, on the other hand, is still waiting for privatization.

[1] By liberalization we stress doing away with entry barriers.