As journalist Alain Vicky explains, "to understand Turkey's vigorous regional and global policy, one needs to look at the activity of the business sector"1. The long-standing economic and political ties between Turkey and Africa date back to the times of the Ottoman Empire. The presence of the Ottoman Empire in most of North Africa has led to a common history and culture between these two economic powers; and, such common background also enhanced the commercial relations between the Turkey and the continent of Africa. However, it is worth mentioning that the commercial ties between these two market players were not always as strong as they are today.

I. Turkish Foreign Policy: The Pioneer of the Commercial Relations Between Turkey and the African Countries

Until recently, Africa was not one of the main focus points of the Turkish foreign policy. However, such standpoint has changed gradually in time in parallel with the economic and political development of African countries. In 1998, Turkey's foreign policy took on a new dimension through a new policy framework known as "Opening to Africa Policy" which has been deepening Turkey's commercial ties with Africa ever since. In accordance with this policy, the Turkish Undersecretariat of Foreign Trade prepared a strategy regarding the development of economic relations with the African countries. Subsequently, the Turkish Government declared the year 2005 as the "Year of Africa". Following these political initiatives, Turkey - Africa relations have gained a substantial momentum in 2008 with "The İstanbul Declaration on Turkey - African Partnership" (the "Declaration") during the African Union's 10th Summit2. The Declaration's main purpose was to promote the economic cooperation and solidarity and to improve the volume of the trade and investments between the parties, by focusing on the potential opportunities in transportation, infrastructure, energy and construction sectors. Such economic partnership encouraged both Turkish and African entrepreneurs to follow the path set forward by these two economic powers.

The Treaties aim to provide mutual protection to the investments towards Turkey and the African countries based on the international law and thus, to create a safer and more stable investment environment for both Turkey and the African countries. In this respect, the Treaties mainly provide the following rights and opportunities for the investors4 :

III. Trade Volume and Investment Volume between Turkey and the African Countries

In addition to the foregoing political and international initiatives taken by Turkey and the African countries, the geopolitical position of the continent of Africa as well as the availability of its sectors to foreign investments attracted small, medium and large scaled Turkish companies. This increasing attention of Turkish investors to the continent of Africa was also reflected on relevant statistics over the years. For instance, the direct investments of Turkish companies around the Africa continent totaled up to USD 100 million in 2003. This number increased rapidly and reached to USD 6.5 billion in 20175.

In their search for alternative markets, Turkish exporters have been considering Africa as a great potential for their economic interests. Accordingly, in addition to direct investments, the trade volume has also increased remarkably. In 2006, the trade volume between Turkey and Africa continent was only USD 5.3 billion. This amount increased more than threefold to reach USD 16.75 billion in 2016.6 The African countries which receive a significant part of the Turkish investments are as follows: Rwanda, Ethiopia, Burkina Faso, Ivory Coast and Mozambique7.

The enhanced relationship between Turkey and the African countries led Turkish entities to seek for more business opportunities in the continent. In order to understand the nature of the commercial relations between Turkey and the African countries, it is important to adopt a sector specific approach to this matter. According to the Ministry of Trade of the Republic of Turkey's Foreign Investment Report dated 2017, the Turkish investments around the continent of Africa are mainly concentrated on the following sectors: construction, infrastructure, wholesale and retail trade, manufacture of textile and clothing and main metal industry. Project value of the Turkish companies operating in Africa has recently reached to USD 55 billion8.

Turkish investors are particularly active in construction and infrastructure sectors. Thus, African countries were constituting 19.2% of Turkish contractors' international business volume in 20119. This amount increased in great amounts since 2011. The remarkable examples of Turkish construction and infrastructure projects which have been carried out in the continent of Africa are as follows: 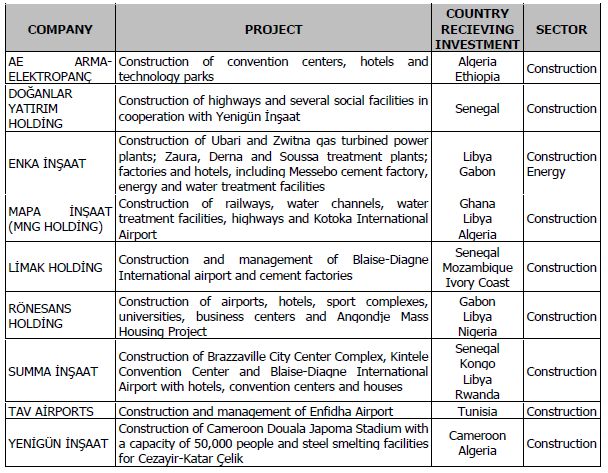 Some of the foregoing Turkish construction and infrastructure companies are listed within the Top 250 Contractors list published by the Engineering News Record. For instance, Rönesans Holding is ranked as the 38th best contractor, Enka İnşaat as the 72nd best contractor, TAV Airports as 76th and Limak Holding as 85th best contractor in the world, also due to their large-scaled investments and projects in Africa.

The commercial relations between Turkey and African countries have grown significantly, however, have not yet reached to the optimum level. While Turkish investments continue to increase, especially African investments towards Turkey still have a great potential for growth. According to the Ministry of Trade of the Republic of Turkey's Foreign Direct Investments Bulletin, the total cash capital inflow towards Turkey corresponds to USD 337 million, and 42% of such amount originated from European Union countries while 35% of such amount is originated from Asian countries. The total cash capital inflow from the continent of Africa is limited. Additionally, only 465 out of the 5941 companies which are established with foreign capital in 2017 in Turkey are established by African investors.

According to Turkish Statistical Institute's data with regards to Turkey's imports by country groups for the year 2017, the African countries have only a marginal share, corresponding to 3.1% of Turkey's total imports and amounting to USD 7 billion.

Turkey's economic involvement in Africa is expected to keep increasing in the near future. It appears that, as long as the African countries ensure the viability and sustainability of their economic environment, the investments they receive from Turkey and other market players will not only be maintained but improved as well. However, for both Turkey and Africa to equally benefit from their ever-growing cooperative commercial relationship, the African countries should also adopt an economic involvement policy in a reciprocal way. In other words, the African countries should encourage their local investors to invest in foreign countries and play an active role in the development of the African economy in order to cherish their thriving economic relations with Turkey.

2 Data obtained from the Ministry of Foreign Affairs of the Republic of Turkey's web site.

4 Data obtained from the Ministry of Trade of the Republic of Turkey's web site.

6 Data obtained from the Ministry of Foreign Affairs of the Republic of Turkey's web site.