The Turkish Competition Authority (the TCA) recently announced amendment of the Guidelines on Vertical Agreements (Guidelines) and opened the draft Guidelines to public discussion. In recent days, various stakeholders had the chance to submit their thoughts to the TCA. Now we are waiting for the final account of the TCA on the proposed amendments.

There were two important issues that the TCA touched upon in the draft Guidelines; assessment of most favored customer clauses (MFC) and evaluation of online passive sale restrictions. Below we provide a brief summary on the aforementioned matters together with other topics subject to discussion.

What is MFC and why is it important?

MFC refers to practices which restrict a contracted seller from offering more favorable prices or conditions through its own means or to other customers. MFC practices are often classified in three groups as follows:

MFC practices are not evaluated as per se infringements. However, they have recently attracted the attention of various competition authorities across the globe, especially with the rapid rise of e-commerce all over the world.

In Turkey, adoption of such practices by various e-commerce platforms have been under close scrutiny - explaining the reasoning behind the TCA's efforts towards providing further explanation on their assessment from the competition law perspective.

What does the TCA propose on MFC practices? 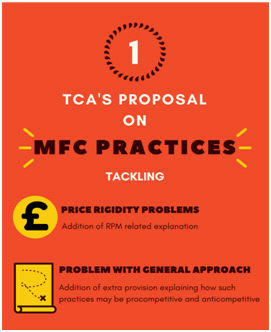 The draft Guidelines concentrate on two main aspects of MFC practices; potential price rigidity problems associated with such practices and general approach to MFC practices from the point of view of vertical agreements.

With regard to the concerns on price rigidity, the TCA proposes to add an explanation stipulating that MFC practices having the effect to reduce the motivation of entities that are not part of such practices to seek better prices and conditions may increase the likelihood of direct or indirect resale price maintenance.

The TCA adopts the European Commission's approach which lists obligation to apply MFC as measures which may reduce the buyer's incentive to lower the resale price and thus increase likelihood of direct or indirect price fixing.

In sum, the draft Guidelines seeks to take a step forward in the international arena towards providing a certain extent of information on how MFC practices should be assessed from the competition law perspective. It must be noted here that the evaluation of the TCA may be setting a precedent for other authorities who seek to tackle the MFC-related competition problems.

What about online passive sale restrictions?

Noticing the ever-increasing significance of "living online," the TCA proposes to align its approach with the European Commission's approach. However, whilst aligning its approach, it leaves the current "hot topic" across Europe out of the scope of its proposal. 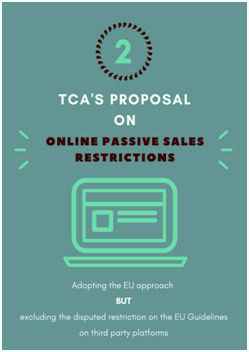 As an extension of the general provision concerning online sales as passive sales, the draft Guidelines suggest that the following conditions shall be listed as hardcore restrictions of passive selling:

On the flip side, the draft Guidelines stipulate that criteria may be imposed to the sellers by suppliers who make online sales in order to preserve the brand image and standard of quality of the distribution network of the supplier. In this regard, it suggests that certain extra services may be required to be provided through online platform or that online re-sellers may be expected to also make sales through brick and mortar shops or showrooms. Moreover, the draft Guidelines note that suppliers may foresee sales of goods from certain third-party platforms that meet certain standards or conditions. On this note, the draft Guidelines provide that any criteria that has the effect of deterring online sales will be regarded as hardcore restriction of passive selling.

What is left out of the scope of the proposed amendments concern the below provided restriction example set in the European Commission's Guidelines for standards/conditions set in relation to third party platforms.

The TCA stays clear from the relevant provision likely because it is a controversial provision interpreted and examined by different competition authorities and courts across Europe as well as the US in varying ways; while one institution regards it as a pro-competitive provision holding interests of especially luxury brands, another notes that the provision may hinder inter-brand competition especially for small-medium sized enterprises.

What are other proposed amendments?

With regard to selective distribution system, the existing provisions are restructured in relation to online sales. In this regard, the draft Guidelines stipulate that agreements including restriction of online sales to end-users shall not benefit from block exemption. Moreover, in relation to the currently available restriction placed on a system-member buyer towards changing or opening a new sales point (stemming from the significance of having brick and mortar shops or showrooms for success of a selective distribution system), the TCA clarifies assessment of online sales. In this regard, the TCA suggests that a new website created by the system-member buyer for online sales does not constitute opening a new sales point.

In relation to the agency relationships, the TCA suggests that a contradiction exists for interpretation of the current provision on non-compete clauses within the scope of agency agreements and the remaining vertical agreements. Accordingly, the draft Guidelines seeks to reconcile the contradiction by proposing to add that non-compete clauses available in agency agreements must also be considered within the scope of Article 4 of the Competition Act as they concern intra-brand competition.

Overall, even though the TCA's effort towards clarifying the legislation has been praised by the majority of the stakeholders, it has created certain tensions between online sales platforms and wholesalers/ retailers. If you are interested in the final outcome, stay tuned!