by Kevin Lester
Cliffe Dekker Hofmeyr
0 Liked this Article
To print this article, all you need is to be registered or login on Mondaq.com.

In a season of frenetic activity, South Africa has seen the publication of a variety of documents intended to further the implementation of Black Economic Empowerment (BEE) and as at the end of October 2004, sectoral transformation charters have been adopted in respect of the petroleum sector (2001), the mining sector (2002), the financial services sector (2003), the maritime transport industry (2003) and the information and communication technology industry (2004). In addition, the Broad-Based Black Economic Empowerment Act (BEE Act) was promulgated in April 2004.

A review of the BEE ownership requirements embodied within existing initiatives, and those alluded to in the Department of Trade and Industry’s (the dti) strategy document on BEE (which serves as the basis for the codes of good practice to be issued under the BEE Act) reveals an alarming lack of alignment. BEE ownership represents just one of seven indicators of BEE compliance. The lack of alignment in respect of just this one BEE indicator has significant and undesirable consequences for the development of a coherent framework of BEE regulation.

By way of demonstration, we have evaluated a BEE equity structure in terms of the existing initiatives. The structure is to some extent atypical, as it needs to demonstrate the misalignment clearly.

and the balance being held by various white male investors. Shareholders at all levels participate in the dividends and the voting rights of the MeasuredCo in accordance with their effective ownership. It is assumed that shareholders have acquired their shares with their own capital and have not financed their acquisition. The corporate structure is demonstrated in the following table: 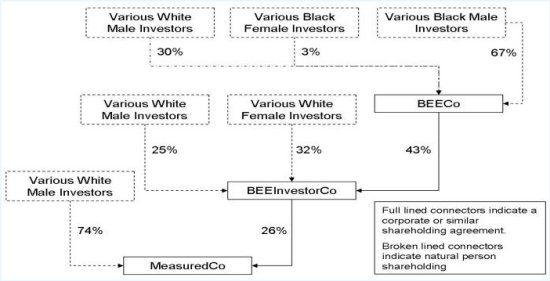 Similarly, the mining charter defines its beneficiary class as being a South African "person, category of persons or community, disadvantaged by unfair discrimination" prior to the adoption of the 1994 Constitution and permits the recognition of a company "owned or controlled" by members of that class as being itself a member of that class. Applying the same assumptions as applied to the petroleum charter, MeasuredCo may be evaluated as 26% owned by the beneficiary class. As the target for ownership in the mining charter is 26%, MeasuredCo will have met its BEE ownership target and may, for comparative purposes, be said to be 100% compliant with its BEE ownership obligations.

The financial services charter defines its beneficiary class as black people, a term which is defined as referring to "all Africans, coloureds and Indians who are South African citizens and includes black companies." The term "black company" is defined as referring to a company that is "more than 50% owned and controlled by black people". Since BEEInvestorCo is not a black company, regard must be had to the next layer of black ownership to determine the level of BEE ownership compliance. BEECo is undeniably a black company, but its effective interest in MeasuredCo must be diluted to the extent that there are non-black shareholders in BEEInvestorCo. Effectively, MeasuredCo may be evaluated as being 11.18% owned by black people. As the target for ownership in financial services charter is 25%, MeasuredCo may, for comparative purposes, be said to be 44.72% compliant with its BEE ownership obligations.

The dti strategy document also defines its beneficiary class as being black people, but it does not include within the beneficiary class, a company majority owned or controlled by black people. As such, the entire chain of ownership must be evaluated in order to determine the effective level of black participation. At each level within the corporate structure, the effective level of black participation must be diluted to the extent that there is non-black participation. Effectively, MeasuredCo may be evaluated as being 7.83% owned by black people. As the target for ownership suggested in the dti strategy document is 25.1%, MeasuredCo may, for comparative purposes, be said to be 31.17% compliant with its BEE ownership obligations.

In the information and communication technology charter, exactly the same principles apply as those in respect of the dti strategy document, with one very significant exception. The information and communication technology charter derives a composite score for BEE ownership based upon the levels of black ownership, black women ownership, black youth ownership and black disabled ownership, weighted at 66.67%, 20%, 10% and 3.33% of the composite score. As such, the score for overall black ownership is evaluated as being 7.83% out of a target of 30%. The score for Black women, which evaluates at 3.83%, is well below the threshold of 30% of the overall black ownership level. The score for black youth and black disabled persons is evaluated as 0% as these parties are not included in the corporate structure. Based upon this evaluation, the composite score for BEE ownership under the information and communication technology charter may, for comparative purposes, be said to be 17.25% compliant with MeasuredCo's BEE ownership obligations.

The stark reality of the misalignment is best expressed in the following table:

Stated in absolute terms, a cellular service provider needs to do six times more to meet its BEE ownership obligations than would be the case for a petroleum company.

This misalignment has significant implications for the South African business community as it impacts upon the ability of companies in sectors subject to more onerous obligations to compete for black investors and to attain their targeted level of BEE ownership compliance.

As such, there exists an enormous obligation upon the dti to establish a more aligned measurement regime that does not advantage certain sectors to the profound disadvantage of others. Moreover, given that BEE is still in the process of evolution, the disparities between measurement approaches creates an uncertainty for companies in unregulated sectors. This is intolerable given the goodwill towards BEE which has started to take hold in the corporate sector.