by Elizabeth Sherratt , Thina Rademan , Peter Harris and Albert Meintjes
KPMG, South Africa
0 Liked this Article
To print this article, all you need is to be registered or login on Mondaq.com.

Cost of capital and impairment testing as required by global financial reporting standards, continues to be an area of great interest to executives, investors, analysts, standard setters and regulators. The beginning of the last decade saw a high growth phase across many sectors, regions and countries only to be cut short by the financial crisis, from which much of the world is still recovering. The increased cost of capital during this time saw many acquisitions and projects being deferred but eventually companies across the globe realised that despite the persistent bearish market conditions, they needed to grow and find investment opportunities for their shareholder funds. As a result, coming out of the financial crisis period in South Africa, we have noted an increase in deal volumes in recent years, but a severely declining trend in deal values. Surprisingly, despite the low deal values, many transactions are still resulting in goodwill premiums being paid.

Some of these premiums have been paid on the back of an anticipation of the end to the downturn in markets and therefore increases in demand, margins and overall profitability. In addition, premiums are also likely given that the JSE has continued to grow quite remarkably (given such a low value of deal activity), hitting record highs in 2012 and experiencing its highest growth year since 2009. Whilst this growth in the equity market is noteworthy, it also needs to be said that certain industries have not fared as well as others. For example, the mining industry has been beset by a number of critical issues which have impacted heavily on value. In addition, we have seen a number of companies in the South African market whose price to book ratios have moved below one, which raises the question of whether these assets are impaired or not.

Impairment testing forces companies to assess whether the conditions that they anticipated when they acquired the asset or made the project investment have materialised, and therefore whether any premiums paid at the time of acquisition, are still considered to be assets of the business. Whilst the average price earnings multiples on the JSE during 2012 have finally returned to pre-crisis levels, in many ways the world market as a whole, and South Africa is no exception, has not grown at anticipated levels and the impact of this is that we would expect to continue to see impairments of goodwill based on the impairment testing framework in financial reporting standards. This survey is an attempt to establish the extent to which companies are still encountering goodwill impairments, and to understand how the cost of capital is currently being calculated, with a comparison to the prior year.

Subsequent annual valuations of acquired cash generating units, or businesses, form the basis for impairment testing. Given that the area of valuations is complex and requires a considerable amount of judgement, it is important to understand how companies are interpreting the requirements of the standard and how they are practically implementing and complying with these requirements. This survey attempts to provide some insight into these processes.

I would like to thank the companies who participated in the survey for their time and interest. I would also like to extend my sincere thanks and gratitude to the team who were involved in putting the survey together.

Significance of the impairment test

More companies recognised some form of impairment during the 2011/2012 period than in the prior period. Goodwill impairments also appear to be slightly up compared to the previous period, whilst asset impairments reported by respondents were up quite significantly. Many more companies appear to have performed trigger based impairment testing compared to the previous period, perhaps linked to macroeconomic instability experienced during 2012.

Value in use remains the most popular basis for impairment testing valuations, with few companies using fair value less costs to sell to determine their recoverable amount. Many respondents indicated that they identify the cash generating unit at the legal entity or sub group level, whilst for half of the respondents this seemed to tie in with their segment level of reporting. There was a decrease in this year's survey in the number of companies who indicated that they identified their cash generating unit at a level below the segment level.

Determination of cost of capital

The average cost of capital calculated by respondents was up slightly from the previous year at 13.5% compared to 12.3% last year, with average terminal or perpetual growth rates being forecast at around 5%. The average cost of equity reported by respondents was 14.16% compared to 13.58% last year. In line with the decrease in the prime lending rate, the average after tax cost of debt reported by respondents also decreased. A majority of companies again determined a CGU specific cost of capital and most also indicated that they apply additional premiums such as country risk and small stock premia where applicable.

Most companies expect overall positive economic developments in 2013 and the majority of respondents expect interest rates to remain stable.

Significance of the impairment test

Determination of the cost of capital

1.1 Basic principles and aims of the study

The cost of capital is required for value-related corporate decisions as well as for accounting purposes, such as the IAS impairment test. The impairment test in terms of IAS 36 is a complex process described in detail in the standard with little practical guidance, which therefore raises many questions as to its implementation. The central issue which our survey has sought to address, therefore, is to determine how the IFRS rules are actually being implemented by companies in their impairment testing processes given the fact that often applications of certain areas of IAS 36 are both unclear and detailed interpretation is frequently required.

In the context of the ongoing volatility of capital markets, both the impairment test and the rules of IAS 36 have gained even more significance than in the past. This study provides insight into the different alternatives resulting from the room for interpretation provided by IAS 36. Additionally, this study also provides an understanding of the difficulties in the practical implementation of impairment testing.

We have summarised our analysis in separate sections related to four main areas:

The purpose of each section is described separately at the beginning of each section. Where necessary, we have outlined the essence of the applicable IFRS rules to provide a better understanding to the reader.

This is the second survey conducted by KPMG South Africa regarding the cost of capital and impairment testing. This survey is primarily based on an equivalent study undertaken by KPMG Europe LLP conducted across Germany, Switzerland, the Netherlands, Austria and Spain for the 4 prior years (referred to forthwith as the "European survey"). We have assessed trends in our data by comparing this year's findings to the results of our previous survey. Where considered necessary, we have also drawn comparisons of our findings to the data in the latest equivalent European study.

The central issue which our survey has sought to address, therefore, is to determine how the IFRS rules are actually being implemented by companies in their impairment testing processes given the fact that often applications of certain areas of IAS 36 are both unclear and detailed interpretation is frequently required.

Information relates mainly to financial statements released in late 2011 and during the course of 2012. The majority of respondents were from the banking sector (13%) and technology sector (13%). 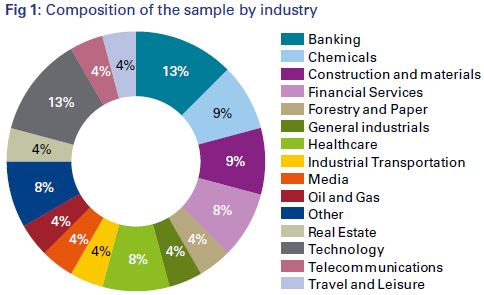 2. Significance of the impairment test

Against the background of macroeconomic instability and lackluster growth, the significance of impairment testing remains in the spotlight. Most companies have become more cautious about impairment since the financial crisis began in 2008/9 and the constrained growth that continues to be experienced in more recent years. These circumstances directly influence the growth prospects of acquisitions, cost of capital and the multiples used by companies in valuations, which are required to be used to determine the values of CGUs for impairment testing purposes. Companies are continually being forced to revisit their forecast assumptions. 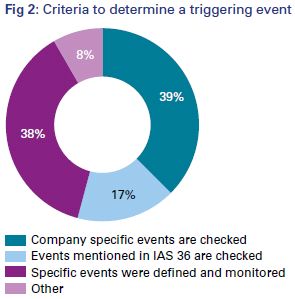 Background IFRS – When must an impairment test be performed?

In total, 63% of respondents incurred some form of impairment in 2011/2012, being either goodwill or asset impairment, a significant increase from the previous year (36%).