by Ernie Lai King
ENSafrica
0 Liked this Article
To print this article, all you need is to be registered or login on Mondaq.com.

On 3 February 2012, the State Intervention in the Minerals Sector report  (“the Report”), prepared by the ANC Policy Institute was submitted to the African National Congress for consideration and will become the subject for wider debate in June 2012. This article provides a brief preview.

The Report sets down the following primary principles:

The Report states that under the current fiscal regime, South Africa is not getting a fair share of such taxation and tables the following tax proposals:

Furthermore,  2 or 3 pilot special economic zones / beneficiation hubs should be established to catalyse resources value-addition and labour absorption, critical mineral feedstock (iron ore, coal and copper) should be classified as “strategic minerals” and supplied into our economy at cost plus prices (reasonable return) or export parity (competitive) prices. The sale of platinum should be subject to approval from the South African Reserve Bank (“SARB”).

Although not permitted in terms of SA-EU trade agreements, export tariffs should be levied in respect of the bulk of unbeneficiated minerals exported to the East (to encourage local beneficiation.)

The tax proposals have significant implications for the minerals industry and the long-term development prospects of the economy. The Report is a complex document and some assertions require careful interrogation, for example, how was the estimated R40 billion from the introduction of the RRT arrived at?

We already have a category of mining rent tax, in the form of royalties but the report proposes the implementation of yet another tax. The introduction of a resource tax is not necessarily a bad proposal but a radical change in the mining tax regime is. A complex and ever-changing tax system creates uncertainty and confusion, which is adverse to investment.

The Report blames SA’s poor mining performance on energy and transport but ignores the calls for nationalisation, mineral rights uncertainty, restrictive labour costs and regulations, Government Department inefficiency and incompetence, corruption and crime, demands on mining companies to provide social infrastructure like schools, hospitals and roads - all these factors have contributed. From the graph below it is clear that mining and manufacturing have both declined as a percentage of GDP despite very favourable commodity prices. Foreign direct investment is looking elsewhere. 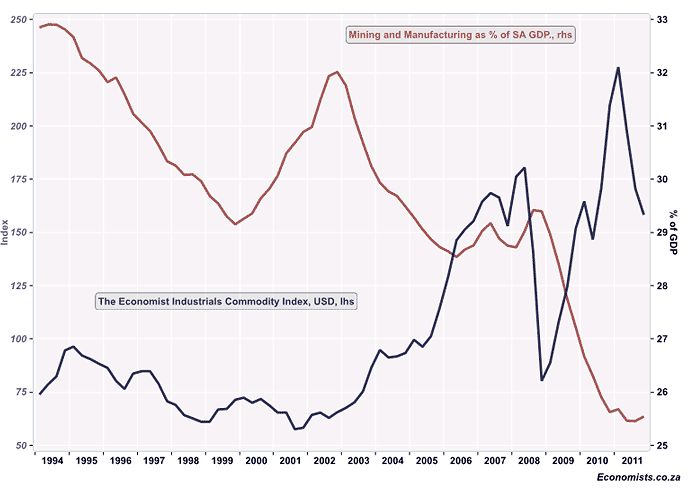 The stated objective of the Report’s proposals is the maximisation of growth, development and employment.  Proposed reforms should therefore encourage that and deal with the reasons why the industry is in decline. Government is looking in the wrong direction - if it wants the sector to contribute more, it should be allowed to do so by Government removing the current obstacles to growth and development. As a general economic principle, one cannot "maximise the growth, development and employment potential" of an industry by imposing more taxes on it. There is not a solitary example of an industry maximising its growth as a result of the State taxing it more. In fact the exact opposite is true. The MEC should be incentivised to expand. Higher taxation on the MEC will have the opposite effect. In the face of regulatory uncertainty, which is already high in SA if many of the Report’s proposals are adopted, the uncertainty will increase. That is highly detrimental to investment.

The Report recognises that the MEC has dominated our economy and is by far the largest contributor to GDP.  Continued foreign investment is crucial to the SA economy.  If SA makes it too costly to do business in SA, this foreign investment will find other investment destinations.

The Report’s proposal for "efficient" taxation appears to be a trade-off against the proposal of nationalisation. Efficient taxation should incorporate the principles of neutrality, equality, simplicity and certainty.  The current debate is not contributing to simplicity or certainty and a rapid outcome and conclusion should be sought.

We need to compare the SA tax regime with other developing countries.  The introduction of RRT may be premature.  For example, Australia has only just introduced RRT and the effects on the Australian economy and mining industry must still be evaluated. The question is how competitive will SA be, post the introduction of the tax proposals.

The situation in Australia is very different and much more conducive to change.  The mining industry is booming, country risks and costs are under control, and the regulatory framework is well-regarded internationally.  Introducing a new tax into this environment is much less likely to do harm to the local industry.  Even then, the Australian Government has been very careful in designing a system which encourages investment and exploration without imposing undue costs on the mining.

South Africa is confronted by a unique set of challenges.  The country has abundant mineral reserves, but mining companies have been reluctant or unable to invest in their extraction. Uncertainly in the domestic regulatory environment, or adverse perceptions thereof, appears to be an important contributing cause.   In this environment, the introduction of additional and more restrictive regulations would further undermine the competitiveness of the local industry.

In taking this discussion forward, government, business and labour must work together in a systematic, cooperative and transparent way to assess the regulatory costs and benefits of each of the proposals. The Report should serve as a basis for a more extensive and inclusive process.