This is the fourth article in a series of articles meant to advise litigants who may have to arbitrate before the CCMA after 1 January 2012, in the face of the new "Guidelines on Misconduct Arbitrations" ("the Guidelines") which were published by the CCMA during September 2011 and which became effective on 1 January 2012.

The purpose of this article is to examine those sections of the Guidelines which advise arbitrators on how to approach and assess substantive fairness in arbitration proceedings relating to misconduct.

An arbitrator's assessment of substantive fairness should be in accordance with the guidelines contained in item 7 of the Code of Good Practice: Dismissal ("the Code"), which obliges an arbitrator to conduct a series of factual enquiries to determine this question.

item 7 of the code

The Guidelines describe in detail the following distinct factual enquiries that flow from the provisions of Item 7 of the Code:

is there a rule?

At the outset it is necessary to prove whether or not there was, in fact, an existing rule or standard in the particular workplace which the employee in question is alleged to have contravened. Should the existence of a rule be disputed, then the arbitrator may decide that dispute either based on the evidence presented, based on the credibility of the opposing witnesses, or the balance of probabilities. The arbitrator may also determine this issue by means of judicial notice: this means to accept something which is clearly well known or indisputable as a proven fact. A rule at the workplace forbidding theft or assault, for example, is clearly something which the arbitrator may automatically accept as proven, by means of judicial notice, without having to require the employer to specifically prove same.

The Guidelines provide that the existence of a rule or standard may be proved in the following ways:

The nature of the sector or workplace is a relevant consideration given that, for example, a stricter standard of compliance is required in a workplace which poses a high risk to safety or security, such as a mine or an airline.

If a rule is not specifically contained in a disciplinary code, but is also not specifically excluded as a ground for discipline, the Guidelines nevertheless permit an arbitrator to rely on such rule or standard, provided that:

The source of a particular rule is also a relevant aspect to consider at further stages of the enquiry, such as when determining whether or not the employee was aware of the rule. It goes without saying that the enquiry into the alleged misconduct will not proceed any further if the existence of the rule itself cannot be proven at this first stage.

was the employee aware of the rule?

Item 3(1) of the Code requires that "[a]n employer's rules must create certainty and consistency in the application of discipline. This requires that the standards of conduct are clear and made available to employees in a manner that is easily understood" (our emphasis). Accordingly, should the employee dispute his or her knowledge of the particular rule, the employer will in turn have to refute this in order to prove the requirement that the employee was in fact aware of the existing rule.

If there is no disciplinary code in the particular workplace, it must then be determined whether the employee could reasonably be expected to have known of the rule or standard. The Guidelines stipulate that this question may be addressed either in terms of the evidence presented, or based on the expertise of the arbitrator. It is important to note that item 3(1) of the Code also determines that "[s]ome rules or standards may be so well established and known that it is not necessary to communicate them". This means that an employee is expected to at least be aware of the basic and self-evident rules of the workplace.

did the employee contravene the rule?

An employee may or may not concede to having contravened the rule or standard. If the employee does not concede to the contravention, this question must then be determined in terms of the evidence respectively lead by both parties. The contravention of an existing rule is a purely factual enquiry and the evidence lead by the opposing parties must thus relate to the facts of the particular matter.

After evidence has been presented in this regard, the arbitrator must summarise and analyse it, and then determine the question based on the credibility of the witnesses, and/or on the balance of probabilities of two competing versions.

The determination of validity entails considering whether the rule or standard is unlawful, or contrary to public policy. It would, for example, not be lawful (and thus invalid) to instruct an employee to do work clearly outside the agreed scope of his or her duties. The implication is that the "contravention" of an invalid or unlawful rule would be justifiable, such as when an employee refuses to comply with an unlawful instruction.

An arbitrator is also required to decide whether a particular rule is reasonable. This is, unfortunately, something of a subjective determination, and should thus be tempered by an acceptance that it is the employer's prerogative to determine rules for the workplace. The test for reasonableness must be distinguished from the test for fairness – the latter test only becomes applicable later in the analysis, in order to determine the fairness of dismissal as a sanction.

The Guidelines do not elaborate much on how reasonableness should be determined, except to state that it may involve a comparison with sectoral norms. An employer would thus have to justify a departure from the generally accepted standard of conduct expected from employees in his or her sector.

was the dismissal an appropriate sanction?

The question is whether, in the circumstances, it was fair for the employer to impose the sanction of dismissal, with reference to either the particular instance of misconduct itself, or to the cumulative effect of various instances of misconduct.

In light of all the relevant circumstances (as detailed in the diagram below), the arbitrator must, at this stage, make a value judgment about the fairness of the employer's decision to impose the sanction of dismissal. The Guidelines require that the following be kept in mind when making this value judgment:

These multiple considerations at this stage can be illustrated as follows: 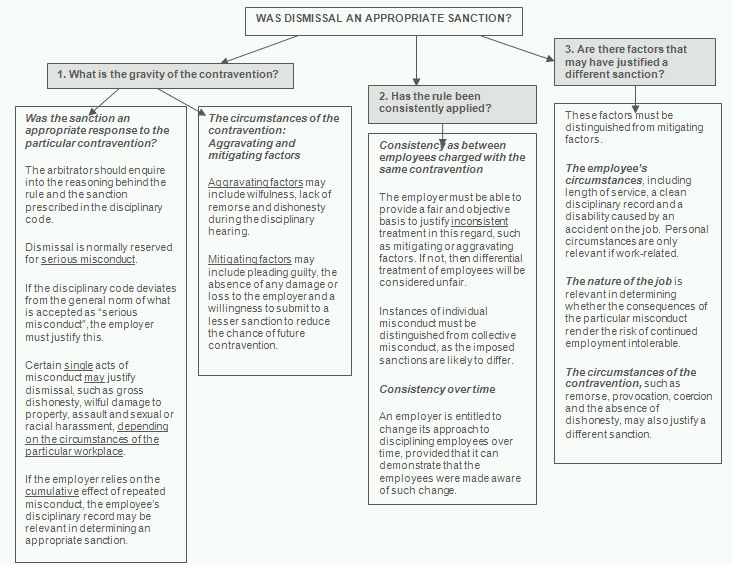 Arbitrators are obliged to take the Guidelines into account and, accordingly, parties are advised to be mindful of the Guidelines in relation to the manner in which an arbitrator assesses substantive fairness during the course of an arbitration relating to misconduct.

The determination of substantive fairness in accordance with item 7 of the Code, read with the Guidelines, clearly requires a comprehensive factual analysis, consisting of the various inter-related factual enquiries discussed above. Litigants are advised to be aware of the respective stages of the process and also of what each of these stages require, so that they may be able to prepare and present their case accordingly. Such knowledge will also place them in a position to evaluate whether or not the arbitrator is conducting the assessment in accordance with the Guidelines, and paying the necessary attention to the various factual determinations which need to be made.

With this in mind, the Guidelines should serve as an essential and practical yardstick against which to measure the assessment and determination of substantive fairness by arbitrators, after 1 January 2012.

ARTICLE TAGS
South Africa Litigation, Mediation & Arbitration Arbitration & Dispute Resolution
POPULAR ARTICLES ON: Litigation, Mediation & Arbitration from South Africa
Comparative Analysis Of ADR Methods With Focus On Their Advantages And Disadvantages
STA Law Firm
"The courts of this country should not be the places where the resolution of disputes begins. They should be the places where the disputes end ...
The New Saudi Commercial Courts Law: A Bold Step For The Administration Of Commercial Disputes
Clyde & Co
On 09 April 2020, the government of the Kingdom of Saudi Arabia ('KSA') announced the enactment of the Commercial Courts Law (CCL)*, representing a significant move to streamline the Kingdom's court system.
The Conclusion Of Saudi Arabia's First Ever Class Action - Just The Beginning?
Clyde & Co
In 2017, the Capital Market Authority in Saudi Arabia introduced a new class action regime for claims by shareholders of listed companies in the Kingdom. In this article, we look at the conclusion...
Challenging And Enforcing Arbitration Awards In Nigeria
S.P.A. Ajibade & Co.
The primary legislation applicable to arbitration is the Arbitration and Conciliation Act, Chapter A18, Laws of  the Federation of Nigeria 2004 (ACA). Section 26 of  the ACA states that ...
The Propriety Of An ACJA In The Planned Reforms Of The Civil Justice Delivery System
Perchstone & Graeys
No society or its commerce can thrive without a working judicial system. This, amongst other factors, has necessitated a consistent call for reforms in the justice delivery sector. This has been further reinforced...
COVID-19 And The "New Normal"- A Case For Freezing Of Limitation Laws?
Banwo & Ighodalo
The recently discovered Corona Virus causes the highly infectious corona virus disease ("COVID-19"). By March 11, 2020, the World Health Organization characterized the virus as a pandemic.
FREE News Alerts
Sign Up for our free News Alerts - All the latest articles on your chosen topics condensed into a free bi-weekly email.
Register For News Alerts
Article Tags
South Africa Litigation, Mediation & Arbitration Arbitration & Dispute Resolution
Related Articles
The SCA Provides Guidance On Interpretation Of Contracts And Vis Major ENSafrica
B-BBEE And Disaster Relief Funding ENSafrica
Litigating During Level 4 ENSafrica
New Directives From The Chief Justice, Supplementary Directives From The Gauteng Judge President And Directions From The SCA In Regard To Litigating During Lockdown ENSafrica
Raf's New Strategy – A Shift Towards Pre-Litigation Settlement And The Impact For Claimants Adams & Adams
Comparative Guides
International Arbitration
Mondaq Advice Centres
Global
Investment Immigration
Global
Trademarks in SAARC Countries
More MACs
Upcoming Events
Mondaq Social Media