Nigeria: Recovery And Resolution Planning - Not Just Another Piece Of Regulation

by Emeka Ilomechina
PwC Nigeria
0 Liked this Article
To print this article, all you need is to be registered or login on Mondaq.com.

The run up to the collapse of Lehman Brothers ("the Bank") was fraught with confusion, panic, and several last minute attempts at saving the bank. Not just weeks before its eventual collapse, but several months prior.

As far back as August 2007, it was apparent to many in the financial world that all was not well at the Bank. Following the collapse of two of Bear Stearns hedge funds, Lehman's shares fell sharply and cracks had begun to appear in the US housing market. It was no secret that Lehman was the largest underwriter of mortgage backed securities (MBS) and at this point, ought to have trimmed its mortgage portfolio. Rather it continued to underwrite more MBS than any other bank globally. By the end of 2007, Lehman had amassed a portfolio purported to be worth USD85billion, approximately four times its net worth. In March 2008, following the near collapse of Bear Stearns (they were eventually bought by JP Morgan), Lehman stock fell 48%. Fund managers, aware of the size of Lehman's portfolio, and already questioning its valuation, began betting against the firm. This precipitated a steady and unstoppable decline in the Bank's share value. Management in a bid to stem the decline, embarked on overtures which sometimes appeared incoherent and largely unsuccessful.

Firstly, steps were taken to sell toxic assets to a newly formed hedge fund, which was staffed by former Lehman MDs and employees, and had Lehman as its main investor. Then there was the announcement that the Bank would be spinning off its asset management and commercial real estate portfolio to a 'bad bank' which would be then sold. This was followed by the frantic search for a buyer, including the Korean Development Bank. Unfortunately, the market had begun to realise Lehman's plight and its valuation of the bank was less than the shareholders of Lehman were willing to accept.

Eventually, the bank was allowed to fail setting off the global financial crisis, effects of which are still reverberating around the world today.

The Financial Stability Board, Dodd-Frank and the Basel Committee

The contagion from the collapse of Lehman Brothers was immediate. Banks, insurance companies and hedge funds struggled to remain solvent. A few collapsed, while several had to be bailed out. The US and UK governments committed a total of USD29trillion and GBP850billion respectively of tax payer's money to assist the ailing institutions.

In response to this global crisis, the G20 leaders at a summit held in 2009 announced the creation of the Financial Stability Board (FSB). The FSB was made up of central bank governors and its primary purpose, was to address vulnerabilities in the financial services sector.

In 2012, the FSB and Basel Committee of Banking Supervision (BCBS) put forward proposals designed to reduce the likelihood of a systemically important financial institution (SIFI) failing, and in the event of failure, the impact on the financial system will be reduced. Among other things, SIFI's were required to prepare and submit credible Recovery and Resolution Plans.

SIFIs within the EU, USA and Canada have been preparing and submitting Recovery Plans since 2011.

In 2009, Nigeria was facing a banking crisis of its own. The effects of the global economic crisis, declining oil prices, and excessive margin lending, were having a negative impact on many financial institutions. Prior to this the Nigeria stock market had been one of the world's best performing stock markets which had led to a steady increase in margin loans to customers. Margin loans are loans made by brokerage houses (many whom were subsidiaries or affiliates to the banks) to clients, which allows them to buy shares on credit. I.e. an investor could buy shares using a small portion of their own funds. The rest is provided by the brokerage with the shares held as collateral. The banks were financing about 65% of the Nigerian capital markets at this time through the margin facilities granted to investors and brokerage houses. Many banks shifted focus from providing credit to the real sector and instead favoured playing the capital markets for short-term speculative gain.

As the global financial crisis continued to bite, there was a large exit of foreign portfolio investors. Further to this, weak regulation allowed for unprofessional conduct by the banks and stockbrokers. Practices such as the setting up of special purpose vehicles to lend money back to themselves for stock price manipulation was rife. All these, contributed to the crash in the Nigerian stock market. Several banks had a large exposure to equity related loans, which resulted in a spike in non-performing loans.

An examination of all banks in 2009 by the Central Bank of Nigeria (CBN) found that ten banks, accounting for a third of the banking assets, were either insolvent or under-capitalised. Just as in the US and UK, the Nigerian Government through the Central Bank, had to inject N620b (of tax payer's funds) into the banking sector to provide liquidity and recapitalise the banks.

In September 2014, CBN and NDIC, in line with global trends, and as part of reform efforts to ensure financial stability in Nigeria, issued a framework for the supervision of domestic systemically important banks (D-SIBs).

Banks are classed as systemically important if their distress or disorderly failure causes significant disruption to the wider financial system and economic activity. Systemic importance of a Bank is determined by size, interconnectedness, substitutability, complexity of its business model, structure and extent of operations. In Nigeria, the largest and most complex banks, of which there are eight (8), account for more than 70% of the total industry assets.

This framework stipulates among other things, higher loss absorbency, more stringent liquidity standards, and quarterly capital and liquidity stress testing, In addition, all DSIBs are required to submit their first set of Recovery Plans to the regulators on 1 January 2016, and every year thereafter.

Although often used interchangeably, Recovery and Resolution Plans are two distinct plans, designed to be invoked at different stages of a SIFIs distress.

Recovery Plans: These are detailed strategies for rapid, orderly and least cost recovery of a financial institution in the event of severe distress. An effective plan sets out the menu of actions a bank can use to recover from both idiosyncratic, and systemic financial stress or both.

Resolution Plans: These are designed to facilitate the effective wind-down of financial institutions without severe systemic disruption and without exposing tax payers to any loss.

As the illustration below depicts, an event may trigger a liquidity or capital crisis, which takes an institution below a 'crisis threshold'. Below this threshold, and if reacted to on time, is the 'recovery zone', where pre-determined actions can be employed to recover from the negative shock. If allowed to continue, the institution crosses the 'failure threshold', which at this point, efficient resolution activities will have to be used to facilitate its effective wind-down. 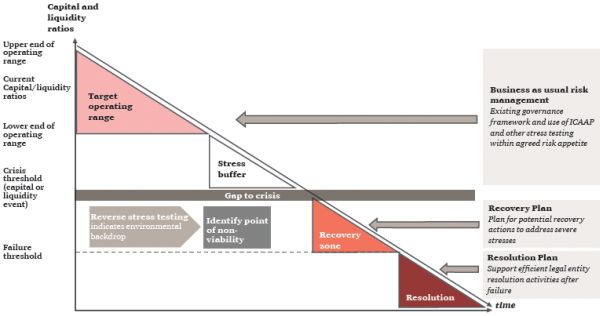 As a start, CBN and NDIC framework requires all D-SIBs to submit only Recovery Plans.

Key components of a Recovery Plan:

Recovery Plans should be realistic, challenging and should force financial institutions to consider taking bold, and potentially unpalatable actions in advance of a stress, to avoid failure.

A Recovery Plan should describe the actions to be taken when severe stress is indicated. The stress indicators need to be clearly established to provide the board and management with knowledge of the urgency of implementing a plan should it become necessary. The timing of implementing the plan is critical as once the market gets wind of the state of distress, stopping the slide as with Lehman's , becomes almost impossible.

A credible Recovery Plan should include:

From our experience in other jurisdiction, regulators typically expect to see well thought out robust plans which demonstrates the below attributes:

Recovery Planning could have prevented the desperate panic at Lehman's that engulfed the board, management and staff, and quite possibly helped to avert the firm's demise. The cracks that were appearing in the US housing market as far back as early 2007, should have been an indicator. The sharp fall in share price following the collapse of two Bear Stearns hedge funds that were heavily exposed to MBS (just was Lehman were), was another indicator. By the time Bear Stearns was sold, the market was aware of Lehman's plight so all recovery actions subsequently, proved futile.

In Nigeria, the global financial crisis that was taking shape internationally should have served as an indicator for the banks. Liquidity was drying up fast in the traditional markets. Several banks in Nigeria had offshore credit lines and hedge funds that had exposure in the Nigerian Stock Exchange began withdrawing funds. All these were potential indicators and trigger points which with a robust plan, could have resulted in action to avert the crisis that unfolded.

The Nigerian economy is currently fragile, with the fall in oil prices, ever depreciating currency and recent political changes. Many businesses are struggling to remain profitable, service their debt, and even stay afloat. Financial institutions would do well to sit up and treat Recovery Planning as a critical and indispensable tool for survival irrespective of whether they are a D-SIB.

ARTICLE TAGS
Nigeria Finance and Banking Capital Adequacy/BASEL Financial Services Securitization & Structured Finance Insolvency/Bankruptcy/Re-structuring Insolvency/Bankruptcy Strategy Economic Analysis
POPULAR ARTICLES ON: Finance and Banking from Nigeria
FIRS Finance Act Circular: Amendments To The Stamp Duties Act
PwC Nigeria
The FIRS Circular reproduces some of the amendments to the SDA, such as the inclusion of electronic documents as instrument liable to stamp duties, electronic stamping and denoting of...
Islamic Finance In Nigeria
Benchmac & Ince
Islamic finance is a financial system that is based on adherence to the Sharia or Islamic law.
Procedure For Money Lending License In Nigeria
Resolution Law Firm
A Money Lending License in Nigeria can be used for consumer and commercial lending in Nigeria.
Protecting Borrowers Under A Loan And Collateral Agreement In Nigeria
Fred-Young & Evans
In order to execute large projects or for businesses to expand, there is usually a need to apply for loan facility from Banks ("the Bank").
Conduct Standard For Banks And Consumer Protection: What Do Unfair Contract Terms Mean For Banks And Other Financial Institutions?
ENSafrica
While it is not clear when the financial services industry can expect the next draft of the Conduct of Financial Institutions Bill ("COFI")
The Conduct Standard: New Obligations For Banks In The Termination Of The Banker-customer Relationship
ENSafrica
The recent development of the Conduct Standard for Banks by the Financial Sector Conduct Authority ("FSCA") has introduced several new obligations on banks...
FREE News Alerts
Sign Up for our free News Alerts - All the latest articles on your chosen topics condensed into a free bi-weekly email.
Register For News Alerts
Article Tags
Nigeria Finance and Banking Capital Adequacy/BASEL Financial Services Securitization & Structured Finance
Insolvency/Bankruptcy/Re-structuring Insolvency/Bankruptcy Strategy Economic Analysis
More Tags
Related Articles
Non-Deliverable Forwards As A Hedging Tool For Currency Volatility In Nigeria Sefton Fross
Significant Economic Presence – Impact On Companies In The Consumer Market And Financial Services Sectors Andersen Tax LP
A Review Of The CBN Guidelines On Global Standing Instructions (GSI) TNP
Chargeback Period Reduction For ATMs, POS And Web Transactions TNP
Raising Capital For Companies: Securitization As An Option In Nigeria Aekley Solicitors
Mondaq Webinars
More Webinars
Comparative Guides
Blockchain
Corporate Tax
Enforcement of Foreign Judgments
FinTech
International Arbitration
Mondaq Advice Centres
Global
Investment Immigration
Global
Trademarks in SAARC Countries
More MACs
Upcoming Events
Mondaq Social Media