Most Read: Contributor Guernsey, May 2020

Carey Olsen Starting Point Guides are intended as a general introduction and guide to different aspects of Jersey law.

They are a summary of the most important issues that we come across. It is very much the edited highlights of those issues. If you would like legal advice in relation to any specific circumstances, please do give us a call.

The aim of this Starting Point Guide is intended to raise management awareness and understanding of the issues surrounding the handling of grievances.

This Starting Point Guide should be read in conjunction with your organisation's grievance policies and procedures.

The best way to manage grievances is to try to avoid a grievance arising in the first place through good management and consistent application of policies. However, whilst this can reduce the number of grievances raised (and produce a more motivated and loyal workforce), even the best organisations and managers are likely to have to deal with a grievance raised under their organisation's formal grievance procedure at some point in their career.

WHY IS IT SO IMPORTANT?

Managing grievances well means that employees can feel confident that they will be listened to and treated fairly. A failure to handle a grievance properly in relation to one employee is likely to impact upon how a manager is viewed by the rest of the team.

More fundamentally, if a grievance is not handled well then it could leave an organisation vulnerable to an employee resigning and bringing a claim for unfair dismissal. In such circumstances a Tribunal will require an employer to demonstrate that a full and fair procedure has been followed.

The following sets out a typical example of how a grievance procedure should operate. We have based this example on a simple two stage process – e.g. grievance and appeal. However, more complex multi stage processes are often utilised.

In addition, there is a Code of Practice on Disciplinary and Grievance Procedures (the 2014 Code) which offers guidance on how to handle grievances. Breach of the 2014 Code does not of itself amount to a breach of the law, but the 2014 Code will be taken into account by a Court or Tribunal when determining whether there has been a breach of the Employment (Jersey) Law 2003.

References to the 2014 Code are included at various points in the example below. A flowchart showing how a typical procedure operates is set out at Appendix 1.

The range of grievances which employees can have about their colleagues (or third parties) is considerable, as is the seriousness of those grievances. Common grievances relate to:

It is important to deal with issues promptly, especially where the employee's grievance relates to his/her line manager.

Managers should remember that HR are available to provide support and should seek guidance where they need to do so – HR will always prefer having a discussion at an early stage to try to avoid the matter escalating to a formal grievance.

In many cases it will be possible for complaints to be resolved informally through discussions between the employee and his or her line manager. Alternatively, the employer may also wish to consider using an independent third party or mediator to help to resolve the complaint. It may have an employee trained as a mediator, or to have recourse to an independent third party if appropriate.

Where an employee raises a formal grievance, the employer should ensure that it has sufficient details of the complaint.

When addressing a grievance, employers should ensure that they comply with both the terms of the organisation's grievance procedure and the 2014 Code.

It may be appropriate to conduct a meeting with the employee to clarify the details of the grievance prior to an investigation. Should this occur, the employee should be given the opportunity to comment on the outcome of any investigation.

The investigation should be undertaken and the Grievance Meeting arranged as quickly as possible (paragraph 50 of the 2014 Code).

The manager appointed to deal with the grievance should be objective and, wherever possible, should not have been involved in the issues giving rise to the employee's complaint.

In most cases it is sensible to have the employee's immediate line manager deal with the grievance, given that he or she is likely to have an understanding of the issues. However, an exception to this is where the grievance relates to the line manager, in which case it should be dealt with by another manager.

If possible, the investigation will be carried out by a manager who will not be conducting the Grievance Meeting itself, but this is less important in the case of a grievance hearing than it is in relation to a disciplinary matter (see paragraph 54 of the 2014 Code).

If the matter goes to appeal then someone who has not been involved in the process to date should hear the appeal. Further, it is preferable that anyone who is involved in the investigation as a witness is not chosen to hold the grievance meeting or appeal.

The employee should be notified of the date, time and venue of the Grievance Meeting, together with informing him/her of the right to be represented by a trade union representative or work colleague (see Representation below).

The meeting should be attended by the manager hearing the grievance, a note-taker (who may be a HR manager), the employee and his or her representative (should the employee wish to bring one).

The purpose of the grievance meeting is to:

The main task for the manager chairing the meeting is to gain a clear understanding of the grievance by listening to the employee and asking questions to clarify the facts.

It is not usual for witnesses to attend the grievance meeting. Witnesses should usually be interviewed at the investigation stage, rather than at the Grievance Meeting.

Any explanation or evidence put forward by the employee who has raised the grievance or who is the subject of the grievance should be considered with an open mind. The manager should not take a decision about the outcome of the grievance before he/she has all the relevant facts.

The manager should not take a decision in the meeting, but should adjourn the meeting to allow for a thorough consideration of all the evidence.

Following the grievance meeting, the manager should make a decision and communicate it in writing to the employee within a reasonable period of time. The reasoning for the decision should also be set out in the letter (see paragraph 57 of the Code).

Options open to the employer include:

The employer should notify the employee of the right to appeal against the decision if he or she is not satisfied with the action proposed, and of how an appeal should be raised (see paragraph 58 of the 2014 Code).

Employees attending disciplinary hearings and appeal hearings have the right to bring a colleague or trade union representative to the hearing with them (see paragraphs 41 and 42 of the 2014 Code).

Further guidance, including on the role of the representative, is set out at:

An employee who feels that their grievance has not been satisfactorily resolved following the grievance meeting should have a right of appeal. The employee should advise the employer in writing of the grounds for their appeal (see paragraph 59 of the 2014 Code).

The standard deadline for appeals is within 5 working days of the formal outcome of the meeting, however, managers should check the wording of their organisation's grievance procedure to see whether a different time period is specified. If the employee exercises his/her right of appeal it is important that the person nominated to hear any appeal is impartial and has not been previously involved in the matter.

The manager hearing the appeal should investigate the appeal grounds and should subsequently arrange an appeal hearing.

An appeal hearing may either be a review of the original grievance meeting or a full rehearing of the grievance; the decision as to which it should be is one for the individual hearing the appeal, taking into account:

The employee should be advised of their right to be represented at the meeting by a trade union representative or work colleague. A member of Human Resources should normally be present.

Arrangements should be communicated before the meeting.

At the appeal hearing, the employee should be asked to go through his grounds of appeal. The hearing may be adjourned if necessary for further investigation.

Following this discussion, the manager should adjourn to consider what the outcome of the appeal should be (see paragraph 60 of the 2014 Code). The possible outcomes are as follows:

The manager should inform the employee of the outcome (and provide reasons) and confirm that outcome in writing to the employee.

Records kept should include:

It may be necessary and appropriate to take action against the employee who was the subject matter of the grievance. For example, where an employee makes an allegation of harassment by a colleague then, if this allegation is substantiated, action should be taken against that colleague under the harassment and/or disciplinary policy (as appropriate).

An employer might also wish to consider what actions can be taken to improve relationships in the workplace (see paragraph 62 of the 2014 Code).

Employers should also be mindful of the need to ensure that the employee who raised the grievance is not victimised for doing so (otherwise this could give rise to a claim for victimisation under anti-discrimination legislation which is due to come into force in September 2014).

Once the grievance has been resolved and after a short period for reflection it can be useful to give some thought as to how to avoid a similar situation arising in the future. For example, it may be sensible to identify a training course for a manager to undertake to improve his skills in a particular area. 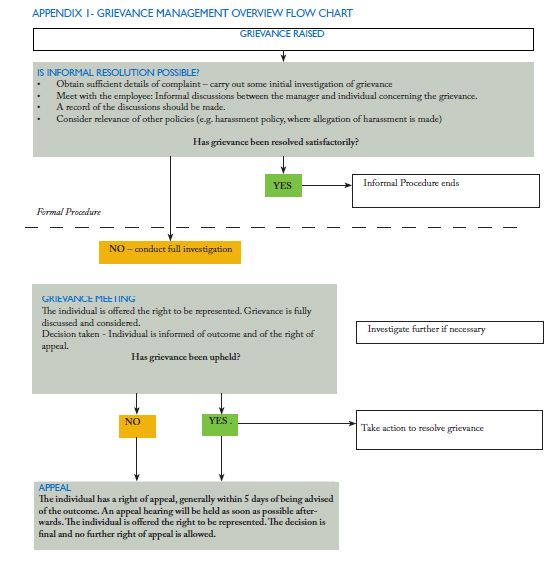