Britain is currently the largest financial services centre in the world, according to the Global Financial Centres Index of March 2016. It accounts for over 20% of all financial services activity in Europe, with more than 250 foreign banks engaged in business there. Various pieces of EU legislation allow regulated entities – such as banks, fund and asset managers, financial intermediaries and insurance companies – that are authorised in one EU member state to carry out a broad range of regulated activities in other EEA countries, facilitated by either the right of establishment (via a branch) or by cross-border provision of services, generally referred to as 'passporting'.

In summary, the concept of passporting means that, once authorised in its home member state, the relevant regulated entity can 'passport' its services into every other EU member state without the need to get a local authorisation and without the need to set up a local subsidiary. Accordingly, if Britain loses passporting rights as a result of Brexit, this could have a negative impact on a vast array of financial services businesses.

Brexit has resulted in many banks and financial institutions undertaking fundamental reviews of their businesses to establish, among other issues, whether Britain is the most appropriate location in which to maintain their operations. Many of the recent EU-driven initiatives aimed at stimulating the flow of capital in the EU – such as the Capital Markets Union – may not, after the occurrence of Brexit, benefit banks and other financial services providers based in Britain.

There is a fear in Britain that Brexit will result in British banks being unable to sell their services throughout the EU and that international banks will scale back their operations and move elsewhere. 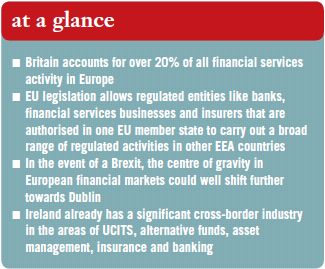 Market volatility could affect both the cost and availability of certain types of finance. This could result in increased margins and an inability, for example, to passport prospectuses into Britain, as well as raising concerns in relation to regulatory capital rules.

Cat's in the bag

Although concerns have been voiced about the economic impact of Brexit on Ireland, it is likely that it could also present us with some opportunities.

In the event that Britain could not negotiate a deal on passporting, it is likely, if not inevitable, that some businesses would move their location from London to other financial hubs within the EU. Standard and Poor's has written that, in the event of a Brexit, the centre of gravity in European financial markets could well shift further towards Dublin. Already there are indications that financial services firms based in London are researching the Dublin office market to check out the potential supply of office space and how rapidly they could acquire it.

Dublin does seem an obvious choice, given that Ireland has a common law system, is geographically close to Britain and mainland Europe, and many of those institutions considering a move may already have some form of presence here. Ireland also has a significant cross-border industry in the areas of UCITS, alternative funds, asset management, insurance (particularly life) and banking.

And the bag's in the river

The British government has indicated that withdrawal from Europe will likely take the form of a 'hard Brexit'. If this is the eventual outcome, it would mean no passporting rights and would possibly even create difficulties for Britain with 'third country' rules under the Alternative Investment Fund Managers Directive (AIFMD), Markets in Financial Instruments Directive (MiFID), for example, but not the Undertakings for the Collective Investment in Transferable Securities (UCITS) Directive or insurance.

What effectively does this mean for Britain? It would not be able to situate a UCITS management company in Britain – rather it would need to establish one in an EU jurisdiction, such as Ireland, and it would lose capacity to be the 'sales person' for its UCITS products.

The outlook is uncertain for AIFs – there could be non-EU AIFs, but no marketing or managing passport. A British-based AIF could probably carry on with an existing type of product/private placement, etc, but it would have no idea as to when (or if) that country regime would be turned on. The situation would be similar with MiFID.

The impact of Brexit on the asset management and investment funds industry may depend on a number of factors, including:

It is worth keeping in mind, however, that UCITS funds themselves (independent of their manager) get the marketing passport. Therefore, just like a US asset manager, a British-based asset manager should still be able to act as an investment manager to an Irish domiciled self-managed UCITS, which could still have an EU-wide marketing passport. Some practical hurdles might need to be overcome to allow the British asset manager's staff to retain a central role in the marketing and distribution processes, but that should not be insurmountable.

The extent of disadvantage will really depend on where the products are being sold. Sale in Britain of British-domiciled products or of products managed by British managers should not pose any problem for British managers. Similarly, UCITS crossborder distribution should not be fatally impacted. However, as AIF products become more mainstream and as 'super management companies' (dual UCITS/AIF) grow their assets and power, Britain may begin to be perceived as having been left behind somewhat.

Post-Brexit, those British managers who supervise non-fund mandates may still be able to access some markets when managing professional or institutional money, but that would require country-by-country analysis and leave them competing with managers who enjoy full access.

For some, setting up an Irish subsidiary with a full EU-wide authorisation may offer a way to address such challenges.

The possibility of positive developments for the international banking sector in Ireland following a Brexit is something that many commentators have indicated is a possibility. The Financial Times has suggested that banks, such as Bank of America, Morgan Stanley and Citigroup, are all considering a move to Ireland. And a report by the London-based policy institute, the Centre for the Study of Financial Innovation (CSFI) has also named Dublin as an alternative location for international banks looking to leave London following a Brexit.

A sizable amount of insurance business is written between Ireland and Britain on a cross-border basis. Following Brexit, if passporting could no longer be relied upon, the ability of Irish insurers to provide their services on a cross-border basis into Britain may face additional regulatory obstacles. The same applies to British insurers seeking to access Irish and other EU markets.

It might also mean that those insurers with an Irish head office authorisation who have a pan-European distribution model, with a particular focus on Britain, may face challenges.

The International Underwriting Association of London has suggested that if Britain were to exit the EU, then "insurers and reinsurers from ... countries such as the United States and Japan might be obliged to choose other European centres over London in order to passport into the EU" – an opinion echoed by the CSFI – and something that might also result in potential opportunities for Ireland.

The referendum on Brexit presented the British public with the first opportunity in over 40 years to decide whether they wanted to remain within the EU. In what was a year marked by shocks on the political front, Britain decided to leave. The impact on the financial markets and the drop in the value of the pound were immediately apparent; however, the longterm legal, economic and political implications of a Brexit for Britain, and indeed the other member states of the EU, including Ireland, are very difficult to predict.

Commentators offer conflicting opinions on the probable consequences for Ireland. Given our close economic, political and social ties to Britain, the effects of a Brexit will likely be more profound here than in any other member state – although the degree and nature of the impact will be shaped to a large extent by the form of the legal model that Britain adopts with the EU. For the moment, it remains to be seen exactly what that will be.