The purpose of this briefing is to update you on developments in relation to MiFID II, which is expected to be implemented across the EEA in December 2016/January 2017.1

The Markets in Financial Instruments Directive (2004/39/EC) (MiFID) came into force on 1 November 2007 and was implemented in Ireland through the European Communities (Markets in Financial Instruments) Regulations 2007 (the MiFID Regulations). MiFID was subject to a mandatory post-implementation review and the European Commission (the Commission) published a paper consulting on amendments to MiFID in December 2010. On 20 October 2011, following the consultation, the Commission published draft legislative proposals in the form of a draft directive dealing with, inter alia, investor protection, authorisation and organisation of trading venues (the Directive) and a draft regulation dealing with, inter alia, transparency and access to trading venues (the Regulation), together referred to as "MiFID II".

The aim of MiFID II is to introduce new post-financial crisis conduct of business requirements, seek to improve the transparency, stability and regulation of the financial markets and ensure that organised trading is conducted on regulated trading venues. It will lead to a more harmonised conduct of business and systems and controls framework for the investment services sector in Europe.

The European Parliament adopted MiFID II at its 15 April 2014 plenary session, and MiFID II was then adopted by the EU Council on 13 May 2014. Publication in the Official Journal is expected in June 2014 and an estimated transposition timetable is set out at the end of this briefing.

On 23 April 2014, the Commission asked ESMA to produce technical advice on delegated acts and implementing acts relating to MiFID II, in particular in the following areas: defining derivative contracts, an exemption for persons providing an investment service in an incidental manner, conduct of business rules, organisational requirements for investment firms, product governance, safeguarding client assets, conflicts of interest, underwriting and placing, remuneration policies and practices, inducements, the provision of investment advice on an independent basis, suitability and appropriateness, best execution, order handling, transaction execution with eligible counterparties, position reporting, what constitutes a "reasonable commercial basis" regarding making information public, portfolio compression and product intervention. The Commission has asked for that technical advice to be provided within 6 months of MiFID II coming into force.

Some of the key changes to be introduced by MiFID II are discussed in more detail below.

MiFID II will be broader than MiFID in terms of the range of firms covered. For example, a wider range of commodities firms will be covered than is the case at present and certain data providers will fall within the scope of regulation for the first time. In addition, a broader range of products will be covered, including structured deposits and emissions allowances. MiFID II will also amend the existing Insurance Mediation Directive (2002/92/EC) to introduce rules for insurance-based investment products, in particular regarding the management of conflicts of interest. ESMA will have powers to prohibit or limit the marketing and distribution of certain types of financial instruments in particular circumstances, and the European Banking Authority (EBA) will have similar powers in relation to structured deposits.

While in the Commission's initial draft of the Directive it was proposed that custody (i.e. safekeeping and administration of financial instruments) was to become a core investment service instead of an ancillary service, which would have brought standalone custodians in Ireland within the scope of the MiFID Regulations instead of the Investment Intermediaries Act 1995, the final text of the Directive confirmed that custody would remain as an ancillary service under MiFID II.

In a fundamental development, third country firms (i.e. non-EEA firms) that wish to provide cross-border investment services across the EEA will be permitted to do so on the basis of a "passport". Under MiFID II, the passport will be exercised either:

In the second case the non-EEA firm must pass an equivalency test to be devised by the Commission. It is also envisaged that persons within the EEA will be able to receive services cross border from non-EEA firms that are not authorised in the EEA where the person in the EEA requests services from the non-EEA firm at their "own exclusive initiative", i.e. on an unsolicited basis. The new regime for non-EEA firms will inevitably lead to a re-write of the cross-border business "safe harbour" in Regulation 8 of the MiFID Regulations and the introduction of a formal "unsolicited business" exemption.

MiFID introduced a harmonised set of conduct of business rules for investment services across the EEA. MiFID II will introduce significant changes to some of these requirements, for example:

Trading venues will also be required to make pre and post-trade data available on a reasonable commercial basis, and a related approved reporting mechanism and an authorised publication arrangement will be established.

The transaction reporting regime is being extended to cover:

MiFID II will require firms engaged in algorithmic trading to comply with specific systems and control requirements designed to ensure that their trading systems are suitably resilient and include appropriate risk controls. The algorithms will have to be tested on venues and information relating to algorithmic trading strategies must be provided to regulators. Firms will also have to maintain records of orders placed and orders cancelled, and provide these to the relevant regulator on request.

In accordance with the wishes of the G20, MiFID II will introduce a mandatory requirement for certain derivatives contracts which are eligible for clearing under the European Market Infrastructure Regulation (Regulation (EU) No. 648/2012) to be traded on a regulated market, an MTF or an OTF.

MiFID II will also introduce a framework whereby competition in the trading and clearing of financial instruments is improved via the establishment of a harmonised regime for access to trading venues and central counterparties (CCPs) on a non-discriminatory basis. Transitional periods are expected to facilitate a smooth transition to the new framework.

An estimated timetable is set below. 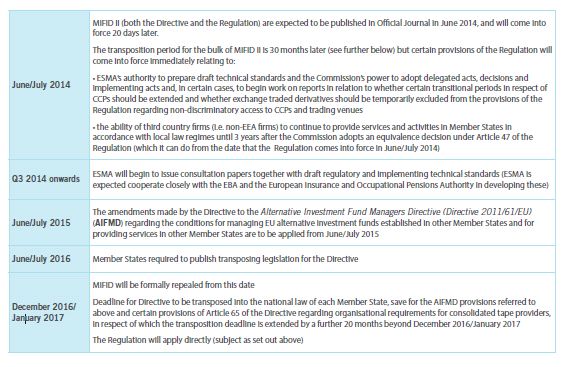 Whilst much of the fine detail of MiFID II will be contained in ESMA's implementing technical standards and national implementation is itself over two years away, there is now enough certainty around MiFID II for firms to begin to identify key threats and opportunities for their business. Firms would also be well advised to engage, to the extent possible, in the ESMA consultation process and the domestic stakeholder discussions that will inevitably take place.