by Aditi Tiwari
Khurana and Khurana
0 Liked this Article
To print this article, all you need is to be registered or login on Mondaq.com.

The once powerful mobile phone companies BlackBerry and Nokia are in the headlines again, not for their new technological developments but because of their legal battle.

The Valentine's Day card for Nokia was in the form of complaint entailing 11 items that Blackberry did not like about it. The complaint listed out the 11 patents of Blackberry infringed by Nokia. The company has not commanded an injunctive relief, i.e. asking Nokia to stop using the patents; instead it has asked for compensation for the unauthorized usage of the said patents. Let's have a brief overview of the case.

Headquartered in Waterloo, Ontario, Canada, Blackberry Limited, formerly known as Research In Motion (RIM), was founded by two engineering students, Mike Lazaridis and Douglas Fregin in 1984. It is a multi-national wireless telecommunications software and mobile hardware company, currently chaired by John S. Chen. It had taken over the smart phone market with its flagship QWERTY keypad range of mobile phones. Blackberry uses its own operating system, and had recently entered the Android arena of smart phones. It had ruled the gadget market with its classy, easy and appealing technology and applications for over two decades until its plunge with the launch of Apple iPhone and other Android phones. It had also developed key innovations that underlie 3G and 4G mobile communication technologies, such as Long-Term Evolution (LTE), including LTE Advanced and Universal Terrestrial Radio Access Network (UTRAN) technologies, and Universal Mobile Telecommunication Systems (UMTS). Blackberry's contribution to innovation, including investment in research and development has exceeded a total of $ 5.5 billion, and has protected the technical innovations by seeking patents from the US office.

In a paper mill in 1865, Nokia was created by Fredrik Idestam and Leo Mechelin in South-west Finland. It is a multinational communications and information technology company, considered to be one of the most important Fortune 500 organizations. Nokia launched Mobira Cityman in 1987, the world's first handheld phone. The most famous Nokia's first GSM handset, Nokia 1101, was a swift hit in the market when it was launched in 1992. The partnership of Nokia with Microsoft It is presently chaired by Rajeev Suri. With the ingression of new companies, Nokia has tumbled down.

Rockstar Consortium bought Nortel's IP in 2011 for $ 4.5 Billion, and created a special-purpose-patent-assertion company to use them. The IP consisted of over 6000 patents covering 4G wireless innovations and a range of technologies. Nokia had also made an attempt to buy Nortel's IP in 2009, but was unable to obtain them due to the latter's bankruptcy proceedings. In 2012, Rockstar Consortium was also listed, by the Business Insider, as the 3rd most fearsome (out of 8) "patent trolls" in the industry.

Rockstar initiated a lawsuit against 8 companies in 2013, including Google, Smasung, and other Android phone makers. When the IP was purchased by it, Google anticipated this scenario. The complaint encompassed 6 patents, all from the same patent family. The case was settled on confidential terms. 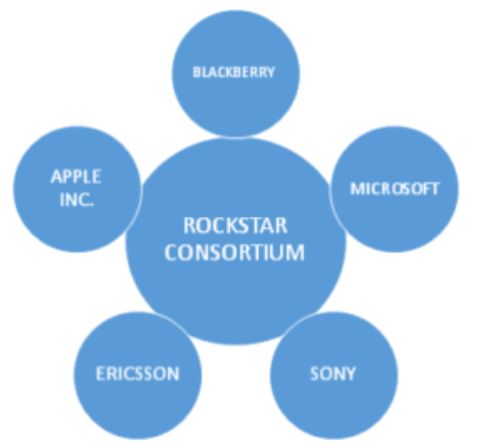 17- 155, United States District Court for the District of Delware (Wilmington). This Court has personal jurisdiction over each of the defendants under the Delware Long-Arm Statue, 10 Del. Code § 3014, and the U.S. Constitution. The Court has jurisdiction over this controversy under 28 U.S.C. §§ 1331 and 1338(a). The action for patent infringement has arisen under the patent laws of the United States, 35 U.S.C. § 1 et seq., including but not limited to 35 U.S.C. § 271.

Blackberry has filed this complaint against Nokia due to the latter's unauthorized usage of the former's contributions to innovation technologies. Blackberry holds the following 11 patents, known as "Asserted Patents" (enforcement of patent by the owner who believes that his patent has been infringed) which are the subject matter of the case:

Blackberry is the owner of all rights, title and interest in the aforementioned patents, with the full and exclusive right to bring suit to enforce them, including the right to recover for past infringement. Blackberry and RIM have publicly declared to the European Telecommunications Standards Institute (ETSI), an industry organization that promulgates wireless telecommunication standards specified by 3GPP (3rd Generation Partnership Project), that the Asserted Patents may be or may become essential to LTE Standards and/or UMTS/UTRAN Standards [practising wireless telecommunication standards], and the declaration is in public domain, accessible on a search engine provided and maintained by ETSI (https://ipr.etsi.org/).

Nokia has taken action intending to cause others to directly infringe the patents, including by selling or offering for sale the Infringing Products to third parties in the United States while expressly promoting these products' capability to practice the LTE Standards, knowing that using these products to practice the LTE Standards would constitute direct infringement of the '418 patent.

The 3GPP specifications that enumerate LTE and UMTS/UTRAN Standards are and have been implemented in Nokia's products like Nokia's Flexi line of products, alone or in combination with Nokia software such as the Nokia Liquid Radio Software Suite (collectively, the "Infringing Products").  The Infringing Products include, without limitation, the following products, alone or in combination:  Nokia's Flexi Multiradio and Multiradio 10 base stations, the Flexi Zone (small cell) Micro and Pico base stations, Femtocell base stations, Flexi Network Server, the Flexi Radio Antenna System, Nokia radio network controllers, and Nokia Liquid Radio Software Suite.

Blackberry alleges that Nokia had knowledge of the existence of the applications for or the family members of the Asserted Patents as it had used the same in various patent prosecutions of its own.

Nokia knowingly and intentionally encourages and aids at least its end-users to directly infringe the asserted patents. Nokia has been, and currently is, an active inducer of infringement of these patents under 35 U.S.C. § 271(b) and a contributory infringer under 35 U.S.C. § 271(c). It has been willfully blind to the existence of the patents. Nokia's infringement has been, and continues to be, willful and deliberate, and has caused substantial damage to BlackBerry. Nokia developed, commercialized, demonstrated, and/or tested the Infringing Products despite its evaluation and knowledge of the Nortel patent portfolio, including the application that led to the issuance of some patents, and its knowledge of family members of a few of the 11 patents from prosecution of its own patent applications. In spite of Nokia's knowledge of the patents, Nokia has continued making, using, offering for sale/lease, and/or selling or leasing in the United States, and/or importing into the United States, the Infringing Products that are compliant with the LTE Standards, without a license from BlackBerry.  Nokia's egregious infringement behavior warrants an award of enhanced damages.

Blackberry prays that the Court:

Both the companies are having a downfall in their sales. Blackberry has stopped making smart phones, and Nokia has had a huge decrease in sales of its one-of-a-kind Lumia phones, manufactured in collaboration with Microsoft. Blackberry has started licensing its software and brand assets to others so that its name in the market continues. Also, it pledged to license these patents as they form essential elements for mobile telecommunication standard.  As is evident from the prayer of the complaint, no injunction has been claimed for. Instead, Blackberry has claimed damages and royalty for the unauthorized use of its patents. This is a smart move by the smart phone maker to commercialize on its leftover assets. Nokia has not responded to this complaint as of now, and is looking into the matter, as per a news article. Nokia's counter is acutely awaited.

ARTICLE TAGS
India Intellectual Property Patent Litigation, Mediation & Arbitration Arbitration & Dispute Resolution Technology New Technology
POPULAR ARTICLES ON: Intellectual Property from India
Artificial Intelligence (AI) Machine Can Be An Inventor? EPO Says NO!!!
S.S. Rana & Co. Advocates
Reasoned order of the EPO in the above matter is expected in January, 2020.
Similar Trademark Issued For Different Items Does Not Amount To Breach Of Law
Khurana and Khurana
The long pending question in the field of Intellectual Property Rights, with respect to the Tademarks, was finally answered by the Supreme Court
IP Case Compilation 2019
LexOrbis
Judgement: The Delhi High court granted a permanent injunction in favour of the plaintiff, Hennes & Mauritz, thus securing the rights of a foreign company in their trade mark against the rights
Intermediary Liability Under Indian Copyright Law: A New Take
Sujata Chaudhri IP Attorneys
On September 27, 2019, after a court-room battle of eight (8) long years, Suneel Darshan, a producer and director in the Indian movie industry, also known for movies like Andaaz and Barsaat, emerged victorious.
Internet Of Things (IoT) And Intellectual Property– The Interconnect
S.S. Rana & Co. Advocates
It has been predicted that by the year 2025, approximately 80 billion devices will be connected making an estimated economic impact of about $3.9 trillion to $11.1 trillion per year.
All You Need To Know About "Well-Known Trademarks"
Khurana and Khurana
With coming up of the new Trade Mark Rules 2017, a new procedure has been created that allows the Registrar to proclaim a particular trademark as "well known".
FREE News Alerts
Sign Up for our free News Alerts - All the latest articles on your chosen topics condensed into a free bi-weekly email.
Register For News Alerts
Article Tags
India Intellectual Property Patent Litigation, Mediation & Arbitration Arbitration & Dispute Resolution
Technology New Technology
More Tags
Similar Articles
Powered by mondaq AI
MATCH
66%
Patents Of Addition Lack Examination Procedures LexOrbis
70%
Patents-In-Waiting LexOrbis
73%
Patents Comparative Guide Obhan & Associates
66%
Commercializing Patents: Methods And Challenges LexOrbis
67%
Freedom To Operate And Business LexOrbis
Related Articles
The Dichotomy Of IPR Protection And Social Welfare- An Analysis Of The Indian Patents Act With Respect To The Pharmaceutical Industry Khurana and Khurana
Patent Application Refused On Grounds Of Insufficiency Of Disclosure Khurana and Khurana
Protecting The Patent Regime For Pharmaceutical Companies In India Khurana and Khurana
Comprehensive Study Of Section 117A Of The Patents Act, 1970 Khurana and Khurana
The Patent Opposition Process In India LexOrbis
Comparative Guides
FinTech
International Arbitration
Labour and Employment
Merger Control
Patents
Mondaq Advice (MACs)
United States Patent Law
United States Types of Patents
More MACs