by
Lorenz & Partners
0 Liked this Article
To print this article, all you need is to be registered or login on Mondaq.com.

By the end of 2009, Hong Kong had 5 comprehensive Double Tax Agreements ("DTAs") in force with Belgium, Thailand, China, Luxemburg and Vietnam.

Most of these DBAs are already in force e.g. French Republic since December 2011 and the Netherlands since January 2012.

The negotiations between Mexico and UAE are finalized. However, they are not signed yet. At present, further negotiations are on-going with Bangla-desh, Canada, Finland, India, Italy, Korea, Macau, Malaysia and Saudi Arabia. No negotiations are taking place or are planned for the near future between Hong Kong and Germany.

The reason for the sudden development of Hong Kong signing DTAs was a report by the OECD in 2009 in which Hong Kong (nearly) got grey listed as a not fully cooperating tax jurisdiction. It was then required to enter into 12 comprehensive DTAs with the 2004 OECD standard on EoI by the end of 2010, in order to be regarded as fully compliant and avoid potential economic disadvantages.

Prior to Hong Kong signing these new DTAs, there were necessary amendments to be made in the local tax law, i.e. the Inland Revenue Ordinance (IRO). Thus, the Inland Revenue Amendment (No.3) Bill 2009 introduced the relevant changes.

Additionally, Departmental Interpretation and Practice Notes No. 47 (DIPN 47) provides for further guidance on how to deal with EoI requests such as the obligation to inform the Hong Kong tax payer about the EoI request from the other state.

It has also been clarified, that Hong Kong will not enter into mere "Tax Infor-mation Exchange Agreements"(TIEA). However, it is certainly interesting to note that Hong Kong and Germany have entered into a mutual agreement about the cooperation with regard to criminal matters, which includes cases of tax avoidance.

Under its new DTAs, Hong Kong will exchange information only from the date the respective DTA is in force, i.e. no retroactive application has to be ex-pected.

In the following, we are providing a comparison of the local withholding tax rates and the new DTA rates for dividends, interest and royalties. The first table shows the status of DTAs as at January 2012. 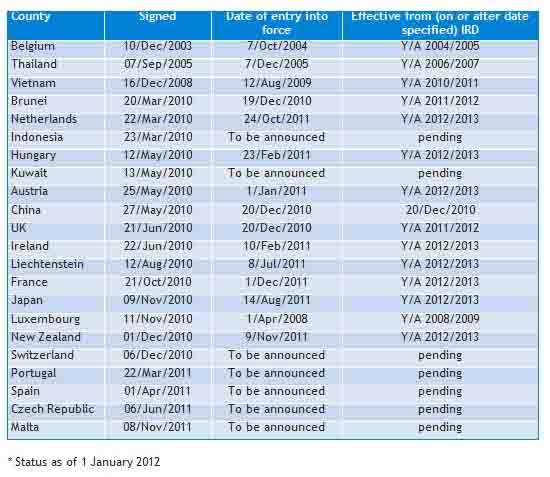 A Double Tax Agreement can reduce the withholding tax rates for dividends. A further reduction may be considered if the shareholder holds the majority of the shares of the other company.

Hong Kong does not withhold any taxes from dividends. Therefore, we only consider the case that a company in the other contracting state will distribute dividends to Hong Kong. 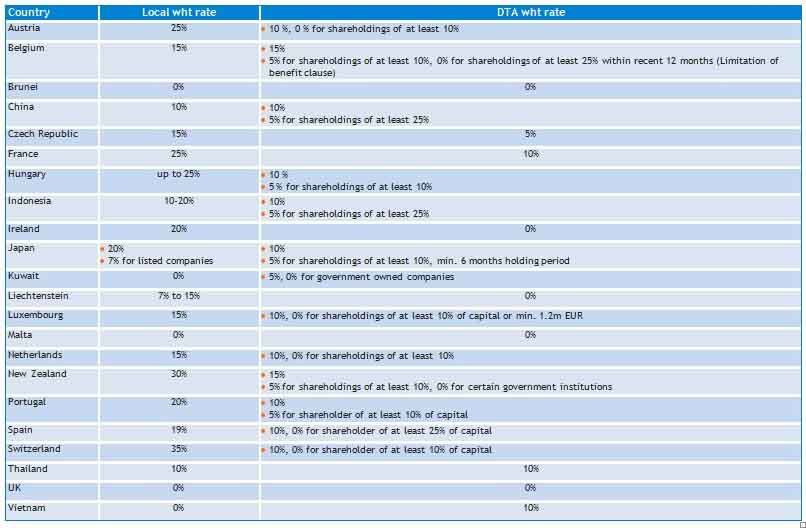 In the following chart we compare the dividend withholding tax rates for those countries which Hong Kong has signed a DTA with. We compare the local rates with the DTA rates for Hong Kong, Singapore and Germany. We only look at the countries in Asia-Pacific, since most European investors would generally not hold shares in other parts of the world via Hong Kong (or Singapore).

The cells highlighted orange show the best dividend withholding (wht) rate, which can be a local rate (e.g. Brunei) or one (or more) of the DTA rates. For 4 out of 7 countries Hong Kong provides for the best withholding rate, while Singapore has the same rate in the case of China. Germany is obviously a disadvantageous location (purely from the dividend withholding tax rate perspective). 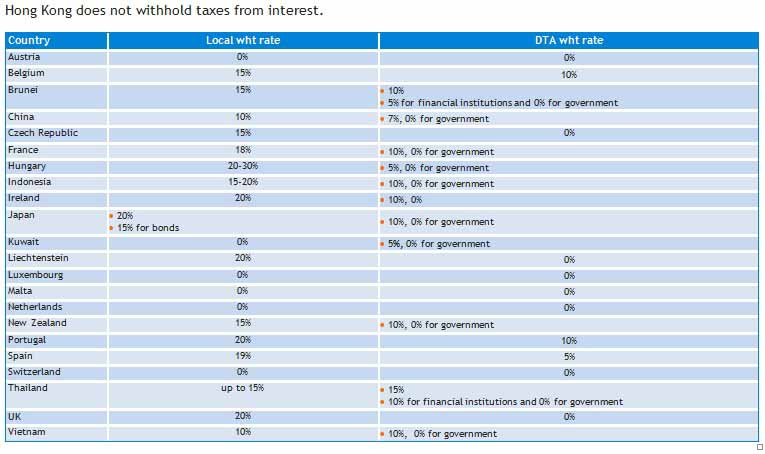 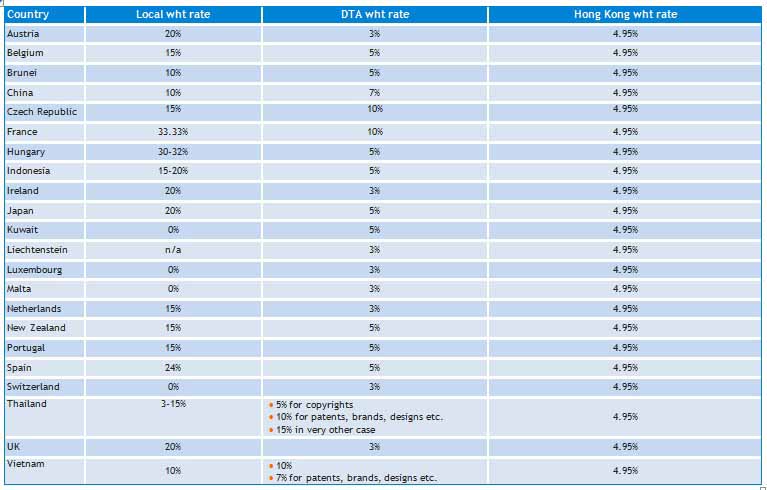 The DTAs with Japan, Netherlands, New Zealand, Spain and the UK do not pro-vide for the service PE.

In the Hong Kong Japan DTA a complex definition of place of management has been used. According to Art. 4(1) (a) resident is a company or person having its primary place of management and control in Hong Kong. According to the Protocol, No. 3, this refers to a place where "[...] executive officers and senior management [...] make day-to-day key decisions for the strategic, financial and operational policies for the company or the person, and the staff of such com-pany or person conduct the day-to-day activities necessary for making such decisions." The location where senior management meets to make their strategic decisions may well differ from the location where other persons or staff conduct day-to-day activities.

Germany is currently not negotiating a DTA with Hong Kong. It is also not clear if or when it comes to negotiations between both countries. The German side rejected a comprehensive double tax agreement in the past and only offered negotiations regarding an agreement of exchange information. The Hong Kong authorities however did not conclude any agreements in respect to the exchange of information, yet.

Hong Kong and Germany are major trading partners in particular for investments from and to China. Therefore a missing DTA caused legal uncertainty. In order to invest from Hong Kong/China to Germany at the moment only indirect investments over other states are in advantages. Similar economical goals can be achieved. However, the costs might be higher.

German companies investing in Hong Kong are only burdened by a slight double taxation as Hong Kong does not withhold any taxes from dividends and interest. Capital gains are also not subject to taxation.

Based on national tax law only royalties are subject to tax (4.95%). However a tax credit might be given in Germany for the tax paid in Hong Kong.

Hong Kong is not (yet) very aggressive in assessing permanent establishments or in adjusting transfer prices, even though the foundations were laid down in late 2009 when for the first time TP regulations have been published. A missing piece may be protection against TP adjustments on the German side, where without a DTA it might be more difficult to get a respective adjustment on the Hong Kong side.

Overall, Hong Kong's new DTAs even with other (Asian) countries may contrib-ute to Hong Kong becoming an even better location as a hub and holding for German groups. As we could show, the withholding tax rates are preferable with most of the treaties Hong Kong is signing. New investors to Asia should therefore consider Hong Kong as their future holding location.