by Davy Yun and Karen Chow
Deloitte Touche Tohmatsu
0 Liked this Article
To print this article, all you need is to be registered or login on Mondaq.com.

Hong Kong's new Companies Ordinance (Cap. 622) (New CO), which became effective on 3 March 2014, includes a broad range of measures designed to enhance corporate governance, ensure better regulation, facilitate business and modernize the law itself. Among the measures to facilitate business reorganizations, the New CO introduces a new concept of amalgamation under court-free procedures that should allow intra-group mergers to be carried out in a simpler and less costly manner, as compared to the traditional court-sanctioned procedures. However, there is some uncertainty about the Hong Kong (and foreign) tax treatment of court-free amalgamations. Despite requests for clarification of the tax consequences of the new amalgamation procedure and/or interpretive guidelines, Hong Kong's Inland Revenue Department (IRD) has not indicated that it plans to issue guidance or practice notes. The potential tax exposure of a court-free amalgamation could be an important factor and cost when a taxpayer is assessing whether to proceed with such an amalgamation or to pursue other alternatives, such as a normal transfer of a business and assets. In the absence of clarifying guidance or amendments to the Inland Revenue Ordinance (IRO), potential tax risks and exposures could actually undermine the stated purpose of the New CO. This article looks at the potential tax issues and considers the likelihood of undesirable tax treatment.

An amalgamation is a legal process under which the undertakings, property and liabilities of two or more companies merge and are brought under one of the original companies or a newly formed company; the companies' shareholders become the shareholders of the new or amalgamated company. In the past, an amalgamation could be pursued only under a complex and costly process involving court-sanctioned procedures. As a result, amalgamations were rarely used for business reorganizations. Transfers of a business and assets, on the other hand, have been carried out more frequently, even though they may give rise to various tax exposures.

While minority shareholders' rights should not be a concern (since court-free amalgamations apply only to wholly-owned intra-group companies), the New CO does contain procedures to protect creditors' rights. The major procedures include special resolutions approving the amalgamation, a solvency statement to be made by the directors of each amalgamating company, a written notice to each secured creditor for consent, a public notice and a five-week period for any member or creditor to file an objection to an amalgamation.

According to Section 685(3) of the New CO, the following occur on the effective date of a successful amalgamation, as specified in the Certificate of Amalgamation:

Section 685(4) of the New CO also provides that, as from the effective date of an amalgamation:

These legal implications of a court-free amalgamation appear similar to those of a universal transfer (i.e. a full assignment of all assets, rights and liabilities of certain legal entities or economic units) that results in a universal succession by operation of law. Upon completion of a universal transfer, the assets of the amalgamating entities automatically are transferred to the amalgamated entity without the need for an individual contract and/or delivery of the asset, or even registration of the new ownership; accordingly, it is an efficient tool to streamline business and to conduct business restructuring. The same should be true of a court-free amalgamation, given its similarities to a universal transfer.

Although the purpose of the New CO is to reduce the business costs of restructuring, this may not be achieved even in court-free amalgamations with a genuine commercial purpose due to the uncertainty relating to the tax treatment of such transactions. Should the IRD regard court-free amalgamations as transfers or disposals for tax purposes, a number of potential Hong Kong profits tax issues or exposures could arise. For example:

Because of the uncertainties relating to the tax consequences of a court-free amalgamation, taxpayers contemplating such an amalgamation should request an advance ruling from the IRD to ascertain their potential tax exposure.

Arguments in support of tax-free amalgamation

Various arguments can be made in favor of the tax-free treatment of court-free amalgamations.

There would not be any undesirable tax exposure if a court-free amalgamation is deemed not to involve a transfer or disposal for tax purposes. We consider this a reasonable conclusion for the following reasons:

Tax anti-avoidance and other issues after amalgamation

Because the IRO does not contain any provisions on amalgamations, there is a potential for disputes with the IRD, which may include the following:

If an amalgamation involves assets located outside of Hong Kong or liabilities governed by foreign law, there necessarily will be foreign legal issues. In addition, foreign tax issues could arise even where all the amalgamating companies are incorporated in Hong Kong. For example, if an amalgamating company or its subsidiary has an equity interest in a PRC tax resident company, it is possible that the amalgamation may be regarded as a direct or an indirect transfer of an equity interest in the PRC tax resident company, resulting in PRC tax implications.

In view of the above, it is important to consider the commercial reasons, local tax implications and foreign legal and tax implications when deciding how to streamline businesses. A high-level summary of the potential pros and cons of court-free amalgamations, compared to normal asset transfers, is provided in the Appendix to this article.

The New CO introduces the concept of court-free amalgamations as a way to reduce business costs of intra-group restructuring. However, there are considerable uncertainties regarding the tax treatment, and without any relevant tax provisions in the IRO or guidance issued by the IRD, undesirable tax issues could result in significant costs that inhibit the purpose envisaged in the New CO. Nevertheless, we consider there are reasonable grounds to pursue a tax-free amalgamation. If this simplified way of amalgamation can be achieved without tax exposure, we believe that court-free amalgamations then could become more common for intra-group restructuring.

Will a court-free amalgamation provide a better business restructuring tool than an intra-group asset transfer? 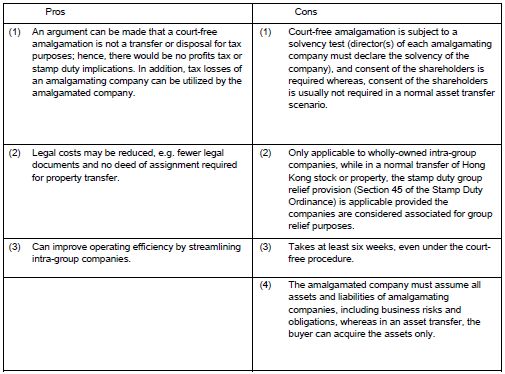