Hong Kong: What You Need To Know About Hong Kong Competition Law (Part 4) - The Merger Rule And The Telco Rule

The Competition Ordinance was enacted on 14 June 2012 as a general and cross-sector competition law to curb anti-competitive conduct, and will come into full effect on 14 December 2015.

In this issue, we will discuss the rules that specifically apply to the telecommunications sector, namely the Merger Rule and the Telco Rule.

What is the Merger Rule?

The Merger Rule1 prohibits a merger involving a carrier licensee under the Telecommunications Ordinance that (whether directly or indirectly) creates the effect of substantially lessening competition in Hong Kong. This rule applies even if:

In general, changes in the control of undertakings which are not of a lasting nature are less likely to have any effect on competition in the relevant market, and the Competition Commission will be less concerned about these changes.

A flowchart illustrating how the Merger Rule works is set out in Appendix 1.

The Competition Commission has identified two safe harbour measures, which are based on (a) concentration ratios2; and (b) the Herfindahl-Hirschman Index (HHI)3 respectively. In general, for a horizontal merger, if the combined market share of the parties post-merger is 40% or more, it is likely that the merger will raise competition concerns.

Exclusions and exemptions from the Merger Rule

The Merger Rule does not apply to statutory bodies unless they are specifically brought within the scope of the Rule, nor does it apply to persons or activities specified in a regulation made by the Chief Executive in Council.

Further, the Merger Rule does not apply to a merger if the economic efficiencies that arise or may arise from the merger outweigh the adverse effects caused by any lessening of competition in Hong Kong4, or if there are exceptional and compelling public policy reasons for granting an exemption.5

What is the Telco Rule?

In addition to the Merger Rule, holders of licences under the Telecommunications Ordinance will also be subject to the Telco Rule6, which prohibits licensees who are in a dominant position from engaging in conduct which may be exploitative. The exclusions and exemptions under the Competition Ordinance will not apply to this rule.

A flowchart illustrating how the Telco Rule works is set out in Appendix 2.

Relationship between "substantial degree of market power" and "dominant position"

Clarification regarding the relationship between the two thresholds were sought during the consultation process on the Guidelines7. Whilst it is generally understood that a "substantial degree of market power" is a lower threshold than that of the "dominance" test adopted in other jurisdictions, the Competition Commission and the Communications Authority have not so far included any guidance on the interpretation of section 7Q of the Telecommunications Ordinance.

During the consultation process on the Guidelines, there were queries on whether "exploitative conduct" as used in the Telco Rule, such as the imposition of unfair prices or other unfair trading conditions, also falls within the scope of the Second Conduct Rule.

As explained in Part 3 of this series8, the category of abusive conduct is an open one, and any conduct which has the object or effect of preventing, restricting or distorting competition in Hong Kong may be regarded as abusive. Hence, if an exploitative conduct has an anti-competitive object or effect (for instance, the imposition of unfair prices or other unfair terms leading to anti-competitive foreclosure in the market), this may also fall within the scope of the Second Conduct Rule.

The imminent implementation of the Competition Ordinance is a significant step in the evolution of Hong Kong's fledgling antitrust regime and multi-national enterprises doing business in Hong Kong can no longer afford to ignore the Special Administrative Region as one that has no competition regime or antitrust enforcement. Understanding and complying with competition law principles is therefore more important than ever. In the next issue, we will discuss the enforcement of the Competition Ordinance in greater detail.

Merger Rule – How it works 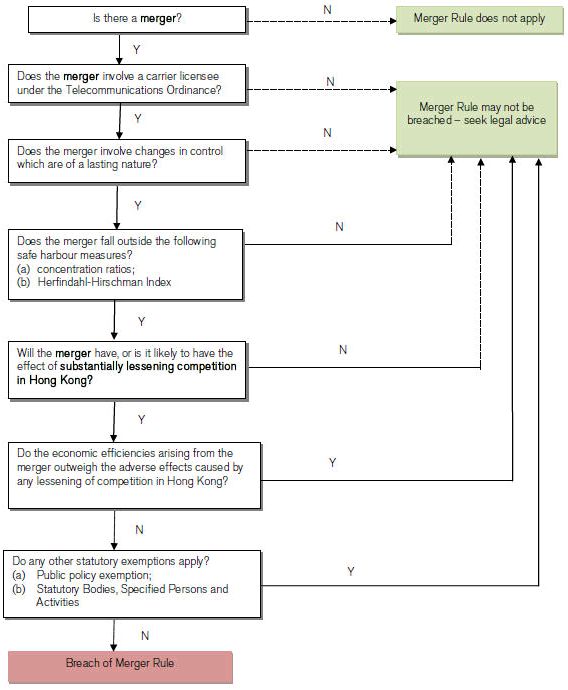 Telco Rule – How it works 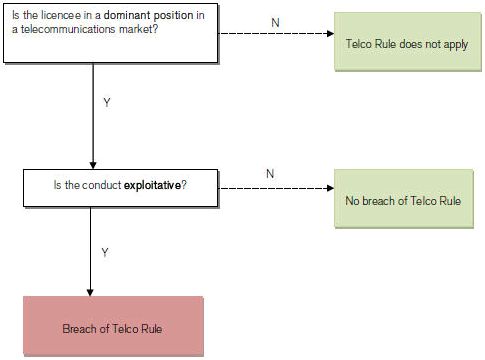 [1] Section 3 of Schedule 7 to the Competition Ordinance provides that "an undertaking must not, directly or indirectly, carry out a merger that has, or is likely to have, the effect of substantially lessening competition in Hong Kong."

[3] HHI measures market concentration by adding together the squares of the market shares of all firms in a market.

[4] Section 8(1) of Schedule 7 to the Competition Ordinance

[5] Section 9 of Schedule 7 to the Competition Ordinance

[6] Section 7Q of the Telecommunications Ordinance provides that "a licensee in a dominant position in a telecommunications market must not engage in conduct that in the opinion of the Authority is exploitative."

[7] On 27 July 2015, the Competition Commission and the CA jointly issued 6 guidelines to provide guidance on how they intend to interpret and apply the provisions of the Competition Ordinance.

[8] See What you need to know about Hong Kong Competition Law (Part 3): The Second Conduct Rule ( http://www.cadwalader.com/uploads/cfmemos/beb7bfc2b4e997b39c94f711b62ebfbc.pdf) for further details.