by Karen Winter
Butterfield Bank (Guernsey) Ltd
0 Liked this Article
To print this article, all you need is to be registered or login on Mondaq.com.

We are now standing on the threshold of an exciting new future for the use of Guernsey segregated asset companies (sacs).This is because in September 2005 the Guernsey authorities varied the rules restricting the use of the Protected Cell Company (PCC) and this was closely followed in May 2006 by the introduction of the Guernsey Incorporated Cell Company (ICC), an innovative extension of the PCC.

Together, these changes have unblocked restrictions and released the full potential of sacs and there are now limitless new opportunities to utilise their strength and flexibility in all areas of both corporate and personal asset structuring and tax planning.

That Guernsey should still be leading the way is not surprising.The sac concept was first introduced in Guernsey as the Protected Cell Company in 1997 and since then nearly 300 have been incorporated.Throughout almost a decade, the skills, expertise, systems and know how of their application have been tested, applied and developed extensively within the captive insurance, fund and securitisation industries. Further testimony to the success of the PCC comes from the fact that the Guernsey concept has now been copied in more than 30 other jurisdictions.

However, despite this success and the imitations, the finance industry in Guernsey has always been acutely aware of – and very keen to pursue – the potential for sacs in other areas of financial planning.The variation of the rules now makes this possible and the years of knowledge and experienced gained will be expertly applied in carrying the sac forward into a greater diversity of tax planning areas.

The basic concept – what is a sac?

The fundamental structure of the sac will be familiar to financial planners through the basic tools of the PCC and, since May 2006, the ICC. It is worth briefly recapping on the key points and traditional uses of both before considering them in the light of potential future applications.

Essentially, a sac is exactly what it says – it is a company that holds an asset (which may or may not have the potential to become a liability), within a corporate "cellular" environment and under specific legislation that allows the assets of one cellular company to be legally segregated from those of all other companies within the structure.

A PCC is a single legal corporate entity consisting of a core vehicle which has the power to create individual cells into which separate assets and liabilities can be placed and thereby segregated. Subject to consents, any Guernsey company can be incorporated as a PCC or, if required, an existing Guernsey company can convert to a PCC. The PCC must be administered by a Guernsey licensed entity. 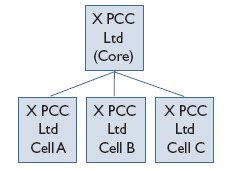 The strength and attraction of a PCC lies in the ring-fencing of assets and liabilities within separate cells because the legislation expressly provides that the assets of any one particular cell are only available to the shareholders and creditors of that cell – creditors of another cell having no recourse against them. Similarly, and following a recent change to the legislation, the core assets may not be used to satisfy cellular insolvency either, except in cases where there is a specific "recourse" agreement in place.

Additional benefits of a PCC

As well as the ability to ring-fence assets and liabilities there are practical and administrative benefits to establishing and using a PCC which also have the benefit of minimising costs when compared to a traditional corporate structure:

The ICC, which has been available since May 2006, does no more than extend certain of the features of the PCC, but these extensions do increase the power and flexibility of the use of sacs in certain situations.

An ICC has the same basic structure and advantages as outlined for the PCC above. But, from that point on, the concept has been extended, which in turn has resulted in added benefits:

Given all of this flexibility and the relaxation of the rules surrounding their use, it is no surprise that Guernsey practitioners are busy unlocking the potential of sacs and turning them into one of the most powerful, invaluable and innovative tools in the financial planner’s armoury.

Sacs will, of course, still have a key role to play in what may now be considered to be their traditional uses and, before considering some of their future potential, it is worth reiterating the uses and reasons why they have become so firmly established.

The use of PCCs in the captive insurance industry represents their traditional and most enduring use.They continue to enable the efficient segregation of insurance risks, coupled with the benefit of cost savings. Historically, this opened up the first cost effective insurance route to the small company and is an option which still remains available today. Rather than have the expense of setting up a stand alone captive, the company can now approach an insurance manager who, having established a PCC, can insure any number of businesses in separate cells, yet within that single vehicle.This not only reduces the formation costs but, also, the capital requirements of the individual companies.

The ability to segregate assets and liabilities within the fund industry make sacs a powerful and well used tool.A typical umbrella fund structure represents a straightforward example because it is possible for a major liability that attaches to the assets of one share class to have a detrimental effect on the other share classes in the umbrella.This risk of "crosslosses" or "cross-contamination" across share classes can be obviated by the segregation of the potential liabilities within different cells of a sac.

In the same way, highly volatile instruments such as options, futures, forwards and derivative assets, or focused investment in a risk associated sector, can be isolated within individual cells.

The sac remains ideally suited for structured finance transactions in that it can issue bonds and notes where the repayment will be funded from the proceeds of specific investments within individual cells.

The traditional uses of the sac as outlined above have been within the corporate sector.Although these will remain, future uses of the sac will focus more on personal and family asset structuring and tax planning.

For example, subject to consents, an individual private client with a mixed property portfolio of retail, commercial and developmental property and land, should now consider structuring the entire business though a sac, thereby isolating the risks from one another and from his other assets.

Outlined below are some further areas of private asset structuring where, over the course of the next year, the Guernsey sac will undoubtedly be applied. Perhaps this is best illustrated in the context of the use of sacs as a useful structure for the Family Office.

The Family Office and the sac

The Family Office is, in itself, becoming an important co-ordinating factor in the long-term generational planning of family assets.When considering the uses of a sac, the two seem tailor-made for one another simply because, within the context of the Family Office, a sac provides the ideal framework for an underlying corporate structure that could hold the family assets. This can reduce the administration for the Family Office normally managed through a complex mix of corporate and trust structures.Trusts can still hold the shares of the sac if required. Corporate governance of the sac can be closely aligned to the governance aims of the family as a whole.

Each cell can provide a separate holding vehicle for one or more assets and, therefore, is ideal for separating family assets within sub groups of the family, such as shares in the family company; investment portfolios (perhaps based on risk or need to generate income); property,maybe based on residential versus commercial; or accessories, wasting assets such as yachts or planes, while at the same time providing the overall structured framework through which the Family Office can operate.

Add to this the option for variable voting rights, differing fees and expenses, a range of investment policies, the option of appointing multiple investment managers, perhaps with each having a specific mandate over different cells and, lastly, varying distribution policies and the flexibility and power of sacs in a private client context is clearly demonstrated.

The Guernsey legislature has also been busy updating the legislation relating to all intellectual property (discussed in detail elsewhere in this feature).This has made Guernsey an attractive centre to register such rights.Tying this in with the sac changes enables any corporation or individual wanting to place their intellectual property portfolios in Guernsey to do so through a PCC or ICC.

This will allow the income flows from royalties, franchising and other rights to flow into a tax efficient environment while, at the same time if, for example, there were elements of research and development, these risks could be isolated. Ultimately, if something of high value were developed, the onward sale of the cell of value could be carried out in isolation.

Now the rules surrounding the use of sacs have been relaxed the opportunities to use them in private client asset structuring and tax planning appear limitless. Multimanager funds, REITs, the inward migration of companies to Guernsey and their conversion to a sac will all provide still further opportunities.

One thing is clear – the continued forward thinking of the Guernsey authorities working in co-operation with Guernsey Financial Practitioners has enabled client advisors to step over the threshold, continue to be creative and innovative with sacs and ensure that Guernsey remains a leader for yet another decade.

ARTICLE TAGS
Guernsey Wealth Management Offshore Company Formation Offshore Financial Centres
POPULAR ARTICLES ON: Wealth Management from Guernsey
Yet Another Shell Bank
Information Management Solutions Limited
Observers will recall that this is the Commission that oversaw the R. Allen Stanford debacle, which is still arguably the world's greatest bank robbery.
Wealth Planning Concerns During The Pandemic
Ocorian
The pandemic has caused many clients to really assess what they want their lasting legacy to be.
The Cyprus International Trusts
Patrikios Pavlou & Associates
The concept of the trust as we know it in our days dates back to the Crusaders in the 12th Century and is based on the Anglo-Saxon legal system.
Key Benefits Of Using BVI Structures
Harneys
Companies incorporated in the BVI are, by most measures, the most popular offshore holding structure in the world
Seychelles Introduces A New International Business Companies (IBC) Regime
Appleby
Fundamental changes to the IBC regime in Seychelles are imminent with the enactment of the new IBC Act 2016 (New Act).
The Appleby 2012 Offshore Round-Up: Trust Disputes
Appleby
A summary of the key decisions handed down in trust cases in the leading offshore jurisdictions during 2012.
FREE News Alerts
Sign Up for our free News Alerts - All the latest articles on your chosen topics condensed into a free bi-weekly email.
Register For News Alerts
Article Tags
Guernsey Wealth Management Offshore Company Formation Offshore Financial Centres
Related Articles
Navigating The World Of Ethical Investing As A Guernsey Trustee Ogier
International Private Client And Trusts Department Appoints 'First-Class' Private Client Lawyer Collas Crill
Guernsey Court Of Appeal Allows A Beneficiary To Terminate A Trust And Receive The Trust Assets, Despite There Being A Power To Appoint Further Beneficiaries Under The Trust Deed Herbert Smith Freehills
Redomiciling Of Companies Between Offshore Financial Centres – Why Businesses Are Consolidating Carey Olsen
Guernsey Foundations Update Ogier
Comparative Guides
Alternative Investment Funds
Mondaq Advice Centres
Global
Investment Immigration
Global
Trademarks in SAARC Countries
More MACs
Upcoming Events
Mondaq Social Media