Guernsey's insolvency regime can usefully be categorised by drawing a distinction between:

The table opposite summarises the main differences in very general terms: 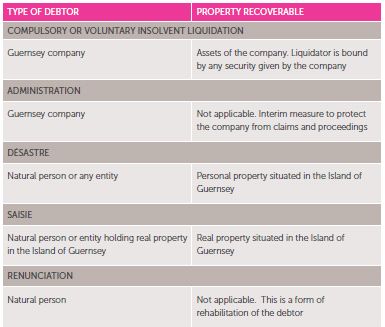 In many respects, the Guernsey provisions are similar to the corporate insolvency regime in the UK.

A company can enter liquidation voluntarily or, as is more usual within the insolvency context, compulsorily pursuant to an order of the Court if the company is "unable to pay its debts", the test for which is that:

This is the test as to whether the company:

However there are a number of grounds, other than insolvency, upon which the Court may make a liquidation order. Generally these relate to various failures of the company to properly function in accordance with company law requirements. Notably, the Court can also order a company into liquidation where it is "just and equitable" to do so or where (only on the application of the Guernsey Financial Services Commission (GFSC)) winding up the company would be in the best interest of the public or to uphold the reputation of the Bailiwick of Guernsey.

In a liquidation, an independent person, the liquidator, takes control of the company's affairs and has all the necessary powers to wind it up in an orderly manner. Accordingly:

The purpose of an administration is to create a temporary 'safe haven' for a company in financial difficulties.

An application for administration may be made to the Court by:

The Court will only grant an administration order for a specified period of time, and any extension will be subject to being satisfied that its purpose may still be achievable.

The administrator has wide powers to operate the company's businesses. During the administration Court proceedings cannot be commenced or continued against the Company without the leave of the Court (or the consent of the administrator), except for claims of secured creditors.

The key advantage of the administration process is its flexibility. There are no formal rules or requirements for reporting, and the general procedures for handling claims and distributing assets that apply in liquidation do not necessarily have to be followed.

A cell of a protected cell company is not a separate legal entity in its own right. Accordingly a cell cannot be subject to a liquidation. It may however have a receivership order (akin to a liquidation) or an administration order made against it on broadly the same grounds and in the same terms as those affecting a company.

In a Désastre, the arresting creditor first applies to the Court for an order that the judgment be executed against the debtor's personal property. HM Sheriff will investigate the debtor's assets, arrest those assets up to the value of the arresting creditor's debt and with the permission of the Court sell the assets by public auction. If it transpires that there are other debts which are likely to exceed the proceeds of sale, this will trigger the commencement of a Désastre.

The Désastre process involves the appointment of a Commissioner to convene a meeting of creditors during which claims against the debtor will be marshalled. The proceeds are distributed in a set order.

Désastre does not extinguish creditors' claims against the debtor to the extent that those claims remain unpaid. Subject to any limitation periods a creditor could claim in a subsequent Désastre should further personal property be discovered, or initiate a Saisie in respect of the debtor's real estate, for any unpaid amounts.

Saisie entails a process of realisation and distribution of the debtor's real property which is conceptually similar to a Désastre. After obtaining judgment against the debtor, an arresting creditor will:

A Commissioner will marshal the claimants to prove their debts before him. Finally, the Commissioner will request the Court to make a final vesting order (FVO). During this hearing the Court will ask each creditor in turn, starting with those having the lowest priority claims, whether they wish to either:

Critically, once the creditor commences or participates in a Saisie, he irrevocably waives his rights to pursue the debtor's personal property. Unlike Désastre, the debt is extinguished and no future claims against the debtor (including a Désastre) can be made in respect of the debt.

Unlike a corporate insolvency which may lead to sanctions against the directors, a debtor in a Désastre or Saisie suffers no formal punitive consequences or adverse impact on his professional status.

Renunciation or forgiveness of debts is Guernsey's closest equivalent to personal bankruptcy in the UK and is rarely used. Briefly:

This note describes proceedings relating to assets located in Guernsey. If the debtor's assets are located outside Guernsey, the ability of Guernsey insolvency procedures to access those assets will depend on the jurisdiction where the assets are based.

The effect of the Insolvency Act Order is that, if an English court makes any order under the Insolvency Act 1986 with regard to any assets outside England, those orders are enforceable in Guernsey, Sark and Alderney, subject to the local laws and practices of the jurisdiction concerned.

ARTICLE TAGS
Guernsey Insolvency/Bankruptcy/Re-structuring Insolvency/Bankruptcy
POPULAR ARTICLES ON: Insolvency/Bankruptcy/Re-structuring from Guernsey
Amendments To The Transfer And Mortgage Of Property Law N.9/65
Harris Kyriakides
On 02/08/2019, the Parliament has passed the Transfer and Mortgage of Property (Amending) (No. 4) Law of 2019 (the "Amending Law of 2019")
Overview: Debt To Equity Conversions
STA Law Firm
In these investment scenarios, there are times when an organization needs more money than is as of now being produced by its activities; it has two different ways to get it.
Mauritius Insolvency Law In 60 Seconds
Harneys
Insolvency law in Mauritius is principally regulated by the Insolvency Act 2009, and it is supplemented by some provisions of the Companies Act 2001...
Restructuring & Insolvency Country Comparative Guide 2020
Campbells
This country-specific Q&A provides an overview to restructuring & insolvency laws and regulations that may occur in the British Virgin Islands.
UAE Insolvency Law: The Opportunity To Repay Instead Of Running Away
BSA Ahmad Bin Hezeem & Associates LLP
UAE expat residents who find themselves in financial difficulties, indebted to the point where their options are limited, fleeing to the airport with hastily packed overstuffed cases and a one-way ticket
DIFC Insolvency Law In UAE Amidst Covid 19
Hassan Elhais
We all have been witnessing major steps taken by the government of UAE in order to prevent negative impact of coronavirus on our economy. COVID-19 has just made wide-scale interruption to various ventures both locally and internationally.
FREE News Alerts
Sign Up for our free News Alerts - All the latest articles on your chosen topics condensed into a free bi-weekly email.
Register For News Alerts
Article Tags
Guernsey Insolvency/Bankruptcy/Re-structuring Insolvency/Bankruptcy
Similar Articles
Powered by mondaq AI
MATCH
65%
2020 Heralds New Insolvency Law Changes For Guernsey Ogier
90%
A Creditors' Guide To Guernsey Insolvency Collas Crill
90%
A Creditors' Guide To Guernsey Insolvency Collas Crill
Related Articles
Guernsey Restructuring Expert Alex Horsbrugh-Porter Appointed To Insolvency Rules Committee Ogier
Carey Olsen Partner David Jones Appointed To Guernsey's Insolvency Rules Committee Carey Olsen
Practical Effects Of Significant Reforms To Guernsey's Insolvency Law Walkers
Crossing Borders In Guernsey: New Insolvency Reforms Ogier
Restructuring And Corporate Recovery Measures In Guernsey – April 2020 Ogier
Mondaq Webinars
Using Your Professional Services Firm’s Largest Source of Market Intelligence: Your Website’s Analytics
Magnifirm
Webinar Sydney Australia
COVID-19 Restart Series: Managing the Return to Work in the Midst of the COVID-19 Pandemic: What Canadian Employers Need to Know
Gardiner Roberts LLP
Webinar Toronto Canada
More Webinars
Comparative Guides
Alternative Investment Funds
Mondaq Advice (MACs)
India FAQs on the Insolvency & Bankruptcy Code 2016
More MACs
Upcoming Events
Mondaq Social Media