by
Mayer Brown
0 Liked this Article
To print this article, all you need is to be registered or login on Mondaq.com.

Legal privilege under German law is not a general principle. However, attorney-client communication is protected by several seizure prohibitions, their scope and applicability depending on the statutory basis of the legal proceedings leading to the seizure of such communication. The Federal Cartel Office ("FCO") can conduct investigations—and seize documents— on the basis of administrative or criminal procedure law. Regarding the latter, the Bonn district court recently defined the scope of privileged client-attorney communication, especially as far as in-house lawyers are involved. Moreover, the court held that inspections carried out by officials of the FCO due to alleged infringements of both national and European competition law will be measured by national principles alone, as long as the decision of the FCO as to which law will finally apply (or whether the case is to be referred to the European Commission ("Commission")), is still pending.

The investigative powers of the FCO for cases where the FCO intends to impose fines, are governed by the Administrative Offences Act (Ordnungswidrigkeitengesetz—OWiG) and the Code of Criminal Procedure (Strafprozessordnung—StPO). German criminal procedure law gives privilege to attorney-client communication in two ways:

While the first privilege requires that the lawyer is in sole possession of the documents in question, the second privilege protects only communication exchanged in close connection to the subject matter of ongoing investigations.

The Decision of the Bonn District Court

The dispute before the Bonn district court centered around documents seized by officials of the FCO—under Criminal Procedure law—in the office of the concerned undertaking’s inhouse counsel. The seizure followed investigations due to alleged discriminatory behavior under section 20 of the Act against Restraints of Competition and an investigation decision of the Commission due to alleged agreements/concerted practices prohibited under Article 81 EC Treaty. Regarding the latter, the Commission authorized the FCO to conduct inspections pursuant to Art. 20 (2) Regulation No. 1/2003.

The seized file in question contained a legal opinion of and other correspondence with outside lawyers as well as the in-house counsel’s notes regarding this correspondence and oral discussions. A part of these documents dealt with a competition law assessment of the undertaking’s dealings with customers. After the local court confirmed the seizure order, the undertaking’s counsels appealed to the district court. The Bonn district court upheld the seizure order, finding that neither seizure prohibitions under German law nor legal privilege principles under European Community law applied to the case.

First, the court analyzed whether a defendant’s constitutional entitlement to effective defense, also protected under Article 6 (3) European Convention on Human Rights and Section 148 StPO, was impaired. Under this doctrine, attorney-client correspondence is protected, irrespective whether it is stored at the client’s or the attorney’s premises. However, the court noted that the scope of this concept encompasses only so-called "defense correspondence." Such correspondence must be prepared in awareness of, and directly relate to, the defense in criminal proceedings. Therefore, the court ruled that the correspondence in question did not relate to the investigations, as it was not the underlying purpose of the legal opinion and the other documents to assess and provide defense against possible legal sanctions for dealings in the past but to provide general legal advice in an ongoing business situation with a view to avoid legal sanctions.

The court went on to analyse the general framework for cooperation between the competition authorities under Council Regulation 1/2003. According to Article 22 (1) and (2) para. 2 Regulation 1/2003, investigations by competition authorities of the Member States, on behalf of the Commission, shall be conducted in accordance with their national law. The court went on to state that according to Article 12 (3) Regulation 1/2003, information exchanged between the Commission and a competition authority of a Member State may only be used as evidence if the information has been collected in a way which respects the same level of protection of the rights of defence of natural persons as provided for under the national rules of the receiving authority. Since no seizure prohibition under German rules was applicable, the court found the seizure in question was conducted in accordance with national rules and therefore also in accordance with Regulation 1/2003.

Finally, the court considered the doctrine of legal privilege, as established under EC law. Referring to the AM & S decision of the European Court of Justice ("ECJ"), the court noted that the confidentiality of written communications between a lawyer and client is subject to two conditions: first, such communications must be made for the purpose and in the interest of the client’s rights of defense; and, second, they must emanate from independent lawyers, who are not bound to the client by a relationship of employment.4 Further, the court noted that this protection not only covers communications exchanged after the initiation of the administrative procedure but extends also to earlier written communications which have a relationship to the subject matter of that procedure. Therefore, the court concluded that correspondence with in-house lawyers at present cannot be regarded privileged under EC law. The court recalled that the ECJ—due to lack of urgency—annulled an interim order of the Court of First Instance ("CFI"), which supported a different view.5 The ECJ stated that if the Commission wrongly denied legal privilege for documents, it would be prevented from using these as evidence. Otherwise, the Commission’s decision on the infringement, in so far as it was based on such evidence, would be annulled.

Nevertheless, the court noted a degree of divergence between German and European law, as far as correspondence between outside lawyers and their clients is concerned. This gap is due to the fact that German law neither generally extends protection to documents exchanged before the initiation of formal proceedings nor to documents not in the sole possession of a lawyer. Consequently, the district court acknowledged that at least the legal opinion prepared by outside legal counsel was protected under EC standards.6 But since the seizure in question aimed at the enforcement of both national and EC competition law and it was still unclear which law would finally apply, the court felt inhibited to invalidate the seizure decision by the FCO. Instead it found that in the meantime the decision would not cause any serious harm to the complainant. If, as a result of the investigations, it were decided that EC law applied, the Commission would be prevented from using this document as evidence. If it were decided that German law applied, the seizure order was valid.

Arguably, the court took the view that legal privilege does not affect the interpretation of national procedural law, despite the ECJ’s recognition of this concept as a general principle common to the laws of the Member States. Even though the court held that legal privilege under EC law does not hold the status of a European fundamental right, it should have considered whether general principles demand effective judicial protection under the effet utile.

Guidelines, as to the scope of protection of client-attorney communication under German Criminal Procedure law, derived from the court’s decision: 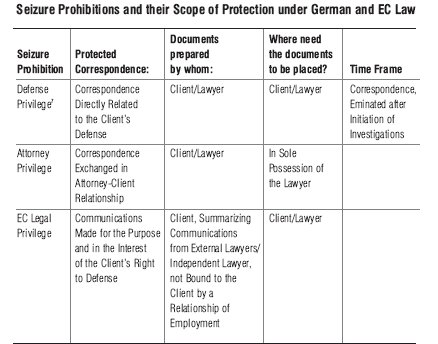