BACKGROUND TO AND IMPACT OF THE CIETAC SPLIT

The split and the subsequent renaming of the former CIETAC South China and Shanghai Sub-Commissions resulted in considerable uncertainty and dispute as to the validity of arbitration agreements specifying, and the enforceability of the arbitral awards rendered by, the breakaway Sub-Commissions, SCIA and SHIAC. This caused concern among users. This concern was heightened when, in 2013, the Intermediate People's Court of Suzhou denied recognition and enforcement, on jurisdictional grounds, of an arbitral award rendered by the SHIAC.2

In recognition of these concerns, the SPC issued a notice in 2013 requiring jurisdictional disputes arising from the split of CIETAC to be reported to the SPC prior to a decision being rendered.3 Notwithstanding this notice, and subsequent rulings issued by courts in Shanghai and Shenzhen affirming the jurisdiction of SHIAC and SCIA following the name changes,4 some uncertainty remained as to whether CIETAC or SHIAC/SCIA (as appropriate) should have jurisdiction over a dispute governed by an arbitration agreement referring disputes to one of the CIETAC Sub-Commissions, i.e., "Shanghai Sub-Commission" or "South China Sub-Commission." 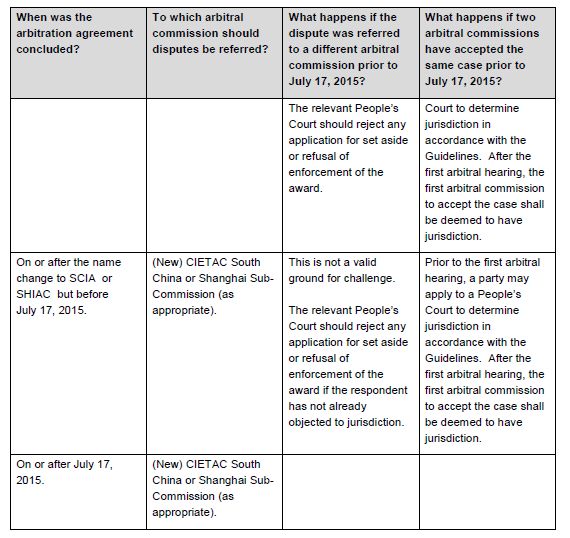 The jurisdiction of PRC arbitration commissions remains an important consideration for foreign parties doing business in the PRC. This is especially true for business done through wholly foreign-owned enterprises (WFOEs), because PRC law requires that disputes between WFOEs and domestic PRC entities be referred for arbitration only to an officially recognized PRC arbitral commission, unless those disputes involve a foreign element. The SPC's Reply provides welcome clarification as to the jurisdictional issues arising from the CIETAC split, and should hopefully restore confidence in Shenzhen and Shanghai as seats of arbitration. The increase in the number of credible arbitral commissions is a positive development for parties arbitrating in the PRC, as increased competition in the market may improve the quality and efficiency of the administration of PRC-seated arbitrations.

3 Notice on Certain Issues Relating to Correct Handling of Judicial Review of Arbitration Matters(最高人民法院关于正确审理仲裁司法审查案件有关问题的通知) (Fa [2013] No. 194).

5 The Reply does not identify specific dates for the name changes by SCIA and SHIAC. The name changes occurred in approximately late 2012 and April 2013 respectively.