China: Q & A On Patent Litigation In China (Part II - Procedure And Argument)

1. What is the process of a typical civil infringement litigation case? 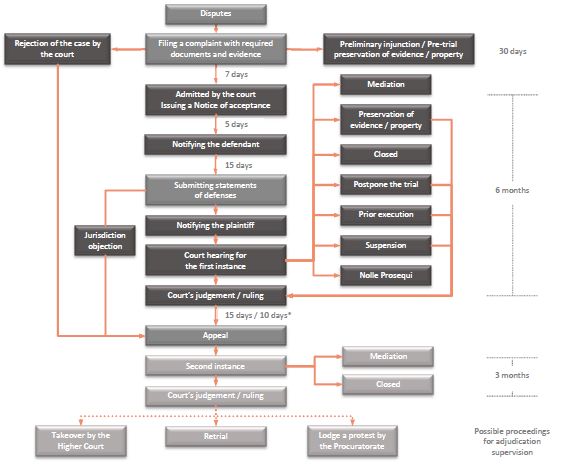 * For cases where at least one of the following occurs: a party is a foreign entity, or any subject of the action or factum juridicum existed outside of China - the time limit is extended to 30 days.

2. What is the process of a typical first instance court session? 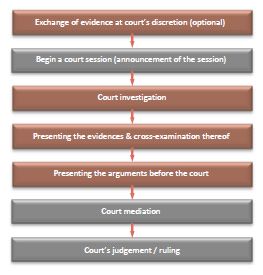 3. How long does it usually take for a typical patent infringement case in the first instance?

Generally speaking, the first instance takes no longer than six months, but foreign cases (i.e. at least one party is a foreign entity) are not subject to this limitation. On average, a patent infringement case in the first instance will be closed within six to twelve months.

4. Do you have any IP case statistics? 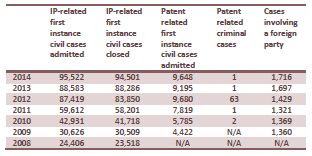 5. Why has the number of IP litigation cases increased so significantly in the past ten years?

Contributing factors may be: an increasing awareness of intellectual property protection; an increasingly effective judicial system, whereby rule of law has become more entrenched compared to other areas; and the government's encouragement to settle disputes by legal approaches. Here, legal approaches are not limited to litigation, and may also include mediation and arbitration.

Moreover, there were 2.36 million patent applications admitted to the SIPO in 2014, with China being number one in terms of application volume of trademarks for over ten years. There are significant numbers of IP rights granted in China, and the right holders are beginning to enforce their rights. IP litigation and IP licensing have followed as a corollary of this. Also, such an increase in IP litigation is an indication that judicial process yields effective remedies for IP-related disputes. 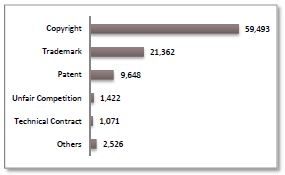 7. The number of patent litigation cases is very high. Are they mostly Invention Patent related cases?

No. In China, there are three forms of patent protections: Invention Patents, Utility Model Patents and Design Patents. According to the China Patent Infringement Litigation Status Research Report (covering 1985-2013), about 50% of the patent litigation cases were Design Patent cases, around 30% were Utility Model Patents and only 20% were Invention Patents.

In 2014, the courts in Beijing* received a total of 11,232 first instance civil cases relating to IPRs. 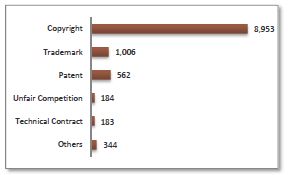 * After its establishment on 6 November 2014, the Beijing IP Court started to accept IP-related civil and administrative cases and the intermediate courts in Beijing no longer received new IP related disputes.

9. What are the commonly used defenses for Patent infringement?

10. Can I use invalidity as a basis for infringement?

No. Initiation of an invalidation process is not considered as an act of infringement under Chinese law. However, very often, once the plaintiff files the infringement suit, the defendant would try to invalidate the patent right in question.

11. If I file an invalidity request with the Patent Re-examination Board (PRB), will the court stay the infringement case?

According to Articles 9-11 of the Several Provisions of the Supreme People's Court on Issues Concerning the Application of Law in the Trial of Cases on Patent Disputes:

Wherein cases involving a dispute over infringement upon a Utility Model or Design Patent,

When the defendant files a Request for Patent Invalidation after the expiration of the period of submitting a statement of defense, the court shall not suspend the action, unless it deems the suspension is necessary after review.

12. How to enforce a Utility Model Patent?

The enforcement of a Utility Model Patent by the court is basically the same as that of an Invention Patent. During the infringement litigation, according to Article 8 of the Several Provisions of the Supreme People's Court on Issues Concerning the Application of Law in the Trial of Cases on Patent Disputes, as required for the adjudication of a case, the People's Court may require the plaintiff to submit an official search report or a patent assessment report. Where the plaintiff fails to submit the report without any justifiable cause, the People's Court may render a ruling to suspend the action or rule to order for the plaintiff to assume any potential adverse consequences.

13. Is it possible to enforce an Invention Patent, when it is still pending?

Please note that the warning letter in this case is not a warning letter in a traditional sense. Since the application is still pending, the letter could only remind the alleged infringer that they should have paid an appropriate fee for exploitation of invention.

14. Why do I need a pre-suit investigation?

Chinese civil litigation has a system which is partially similar to that of discovery / disclosure processes in the USA and the UK respectively, but it is at the court's discretion. In most infringement cases, the plaintiff bears the burden of proof. In other words, the evidence for:

shall be presented by the plaintiff to the court. Therefore, evidence to identify the alleged infringer (definitive information), and the infringing acts are very important, hence the obvious need for pre-suit investigation.

ARTICLE TAGS
China Intellectual Property Patent Litigation, Mediation & Arbitration Trials & Appeals & Compensation
POPULAR ARTICLES ON: Intellectual Property from China
Assignment And Licensing Of Copyright
Singh & Associates
Copyright is a protection given to the creators of certain types of works as an acknowledgment to their intellectual input
Patent Law in India
Anand & Anand
The Patents Act 1970, along with the Patents Rules 1972, came into force on 20th April 1972, replacing the Indian Patents and Designs Act 1911. The Patents Act was largely based on the recommendations of the Ayyangar Committee Report headed by Justice N. Rajagopala Ayyangar. One of the recommendations was the allowance of only process patents with regard to inventions relating to drugs, medicines, food and chemicals.
Patents Law In India - Everything You Must Know
Vaish Associates Advocates
The presentPatents Act, 1970 came into force in the year 1972, amending and consolidating the existing law relating to Patents in India
Copyright Law In India- Everything You Must Know
Vaish Associates Advocates
Indian copyright law is at parity with the international standards as contained in TRIPS.
Compulsory Licensing In India
Khurana and Khurana
WIPO defines patent as an exclusive right granted for an invention, which is a product or a process that provides, in general, a new way of doing something, or offers a new technical solution to a problem
Why pay for a trade mark when I can get copyright for free?
Spruson & Ferguson
From a brand protection perspective, registered trade marks generally trump copyright.
FREE News Alerts
Sign Up for our free News Alerts - All the latest articles on your chosen topics condensed into a free bi-weekly email.
Register For News Alerts
Article Tags
China Intellectual Property Patent Litigation, Mediation & Arbitration Trials & Appeals & Compensation
Similar Articles
Powered by mondaq AI
MATCH
70%
Patent Validity And Infringement Issues Heard Together In China For The First Time: What Patent Owners Should Consider Before Choosing This Route Gowling WLG
70%
Record Amount Of Damages Requested In Chinese Patent Case China Sinda Intellectual Property Ltd
67%
China Is Amending The Patent Law CCPIT Patent & Trademark Law Office
65%
Highlights Of The Draft 4th Amendment To The Patent Law Published On January 4, 2019 IP March
67%
New Developments In The Fourth Amendment Of The Patent Law Of The People's Republic Of China China Sinda Intellectual Property Ltd
Related Articles
Switching stances: China policies to focus strongly on patent quality Spruson & Ferguson
GossIP – April-May, 2020, HFG Law & Intellectual Property Newsletter HFG Law & Intellectual Property
【华源原创】防范专利侵权，做好FTO尽职调查究竟有多重要？ Kangxin
专利申请"一案两请"越来越"火"？如何掌握正确操作方式？ Kangxin
您可能不知道的事：营业执照经营范围可能会导致商标驳回！ Kangxin
Comparative Guides
Merger Control
Trademarks
Mondaq Advice Centres
Global
Investment Immigration
Global
Trademarks in SAARC Countries
More MACs
Upcoming Events
Mondaq Social Media