by Xi Sun
Lifang & Partners
0 Liked this Article
To print this article, all you need is to be registered or login on Mondaq.com.

It is possible that a few drafting errors still exist in a granted claim due to drafting or examination carelessness, which may cause interested parties to understand the claim controversially in a post-grant proceeding. A recent Supreme Court decision shows that correction of the drafting errors can be allowed with conditions:

If a claim phrase in an invention or utility model patent is obviously wrong in expression, but people skilled in the art can find its unique correct explanation clearly, directly and without any doubt in accordance with the disclosure of its specification, the explanation can be used to define the claim's scope.

The Supreme Court proved this attitude in the (2011) Xing Ti Zi No. 13 Decision, regarding the validity of a patent for utility model No. ZL200720128801.1 entitled a precise rotation compensator (the '801 patent). The compensator is used in heat pipelines to absorb axial thrusts and displacement in the pipelines by rotating its inner and outer tubes. Claim 1 recites as below: 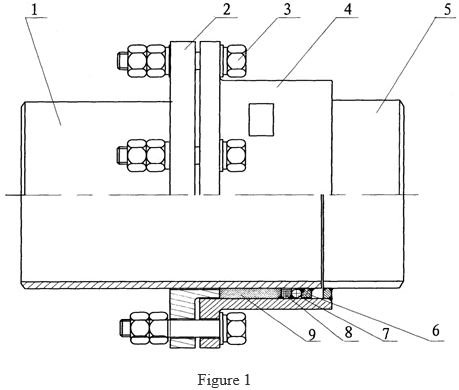 Petitioner filed an invalidation petition before the Patent Re-examination Board ("PRB"), challenging the inventiveness of the '801 patent, and claiming that the highlighted feature of claim 1 was not supported by the Description under Article 26. 4[1] of the Patent Law. The PRB cited the disclosure in the embodiment of the Description and concluded that the outer tube 4 and the extension tube 5 were fixedly connected without any gap being formed therebetween, however, between the extension tube 5 and the inner tube 1 a gap was formed. Patentee's argument of "obvious typos" of the highlighted feature was rejected by the PRB for the reason that "obvious typos were limited to obvious spelling and punctuation errors only" under the Guidelines for Examination. The PRB invalidated the '801 patent in its No. 13091 Decision, which was affirmed by the trial and appellate courts. Finally, Patentee appealed the Decision before the Supreme Court.

The Supreme Court held that a claim feature may have drafting errors like inexact wordings or expressions due to objective limitations on lingual accuracy and prosecution experience. It divided the drafting errors into obvious and nonobvious under their nature and extent. According to the Supreme Court, an error is obvious if people skilled in the art can find it immediately after reading other claims and determine its single right meaning by combining their knowledge with the disclosure in the Description and Drawings of the patent.

In addition, the Supreme Court held that if a patent was invalidated under Article 26 (4) only, but the patentee was not permitted to correct the obvious error in the claims, Article 26(4) might be used as a punitive tool against patentee's inappropriate claim drafting.

The Supreme Court overruled No. 13091 Decision as well as the lower courts' affirmations, maintaining the '801 patent's validity.

The "obvious drafting errors" in §8.3, Chapter 2, Pat 1 of the Guidelines for Examination used to include obvious typos of spelling and punctuation, but the Supreme Court expanded them to obvious technical errors. Under the Court's ruling, an obvious technical error refers to one that people skilled in the art, based on their general knowledge, can identify and reach a single right explanation immediately after reading the claims, description, drawings or the file history. Such an obvious technical error usually has an "obvious" and "clearly defined" literal meaning, and results in a different claim scope if it is revised. On the other hand, such a technical error is sort of covert that people skilled in the art may have to compare the claim feature in question to the description or the file history, sometimes with necessary technical analysis, before its single right answer is determined.

The skilled in the art shall be the person to determine whether a claim feature is of an obvious technical error. If a claim feature comprises a phrase that makes the claim or the feature obviously contrary to the technology disclosed in description, or renders the technical solution apparently not doable or the technical problems unresolved, or causes the claim apparently inconsistent with what disclosed in the description, the phrase contains an obvious technical error. "A unique right answer that can be determined immediately" can be interpreted as an answer that can be deducted clearly, directly and without any doubt from the description and drawings. However, when considering whether a claim error is obviously wrong in technique, it is advised to put other claims, the description and file history, or patentee's specific response to the invalidation petition into account before a conclusion is reached.

Moreover, it seems that the Supreme Court would be more tolerable in interpreting drafting errors in a claim feature. The Court can cite the description to define a limitedly flexible explanation, in order to avoid mechanical understanding to the literal meaning of the feature.

ARTICLE TAGS
China Intellectual Property Patent
POPULAR ARTICLES ON: Intellectual Property from China
Assignment And Licensing Of Copyright
Singh & Associates
Copyright is a protection given to the creators of certain types of works as an acknowledgment to their intellectual input
Patent Law in India
Anand & Anand
The Patents Act 1970, along with the Patents Rules 1972, came into force on 20th April 1972, replacing the Indian Patents and Designs Act 1911. The Patents Act was largely based on the recommendations of the Ayyangar Committee Report headed by Justice N. Rajagopala Ayyangar. One of the recommendations was the allowance of only process patents with regard to inventions relating to drugs, medicines, food and chemicals.
Patents Law In India - Everything You Must Know
Vaish Associates Advocates
The presentPatents Act, 1970 came into force in the year 1972, amending and consolidating the existing law relating to Patents in India
Copyright Law In India- Everything You Must Know
Vaish Associates Advocates
Indian copyright law is at parity with the international standards as contained in TRIPS.
Compulsory Licensing In India
Khurana and Khurana
WIPO defines patent as an exclusive right granted for an invention, which is a product or a process that provides, in general, a new way of doing something, or offers a new technical solution to a problem
Why pay for a trade mark when I can get copyright for free?
Spruson & Ferguson
From a brand protection perspective, registered trade marks generally trump copyright.
FREE News Alerts
Sign Up for our free News Alerts - All the latest articles on your chosen topics condensed into a free bi-weekly email.
Register For News Alerts
Article Tags
China Intellectual Property Patent
Related Articles
您可能不知道的事：营业执照经营范围可能会导致商标驳回！ Kangxin
学习十九大精神，提升专利服务质量 CCPIT Patent & Trademark Law Office
也谈网络社交媒体上的信息发布是否属于"为公众所知" CCPIT Patent & Trademark Law Office
Chinese Court Sends IP Enforcement Signal By Awarding Record Patent Damages ENSafrica
Discussion On Risks Of ‘Patent Right Investment' Kangxin
Comparative Guides
Merger Control
Trademarks
Mondaq Advice Centres
Global
Investment Immigration
Global
Trademarks in SAARC Countries
More MACs
Upcoming Events
Mondaq Social Media