by David A. Livdahl and Jenny Sheng
Paul Hastings LLP
0 Liked this Article
To print this article, all you need is to be registered or login on Mondaq.com.

I. SUMMARY AND BACKGROUND

In summary, under the State Council SR Circular, the National Development and Reform Commission ("NDRC") and MOFCOM, along with other PRC governmental authorities that regulate the relevant industrial sectors, will establish a joint committee ("Joint Committee") to conduct the security review under the leadership and supervision of the State Council. Similar to the Committee on Foreign Investment in the United States ("CFIUS"), the Joint Committee will review foreign takeovers of PRC domestic businesses for national security issues.

In recent years, Chinese authorities have rejected several high profile proposed acquisitions of domestic companies by foreign investors, such as a US$2.4 billion bid by Coca-Cola for the Chinese company Huiyuan Juice in 2009 and Carlyle's US$375 million bid for construction equipment maker Xugong in 2008. Nevertheless, no proposed acquisition by a foreign investor has yet been blocked explicitly on "national security" grounds due to a lack of published legal guidelines.

On the other hand, several recent strategic efforts of outbound acquisitions of foreign companies by PRC leading private companies and State-owned enterprises have encountered hurdles or difficulties under the security review mechanisms of other foreign countries. In 2005, Stateowned oil group China National Offshore Oil Corporation suffered a huge setback when it had to abandon its US$18.5 billion bid for Unocal in the United States due to what it called "unprecedented political opposition." i Also, CFIUS intensely scrutinized the acquisition of IBM's PC division by Lenovo (a leading Chinese computer company), approving it only after conducting a forty-five (45) day review and concluding a mitigation agreement. In 2008, the proposed investment in U.S. network security company 3Com by Huawei Technologies Inc. (one of China's leading global companies) was thwarted when objections were raised by CFIUS. Furthermore, in 2009, the State-owned China Non-Ferrous Metal Mining (Group) Co. dropped a US$400 million bid for 50.6% of Lynas Corp, owner of the world's richest deposit of rare-earth minerals based in Australia, saying the conditions set by the Foreign Investment Review Board of Australia were too stiff. In mid-2010, CFIUS scuttled another proposed investment by Huawei, this time in mobile communications companies 2Wire and Motorola. As a consequence, it has been anticipated by foreign investment experts and international transactional lawyers that the PRC governmental authorities might adopt stricter security review standards to review inbound acquisitions by foreign investments.

The State Council SR Circular took effect March 5, 2011 and the Interim SR Rules have a limited validity period from March 5 to August 31, 2011. However, considerable uncertainties still remain before the security review can be effectively enforced. Below are our preliminary observations on the Interim SR Rules.

A. Specific Scope of Industries for Security Review

Although the State Council SR Circular includes a list of strategic and sensitive industries, terms such as "important agricultural products, important energy and resources, key infrastructure, important transportation services, key technology and important equipment manufacturing" appear to be too broad and generic if no specific or further guidelines will be issued. It is important that the State Council and MOFCOM clarify the specific industries or products that will be applicable to security review, such as specifying what specific equipment and resources will be regarded as "important equipment" and "important resources" for security review.

It is also important that the State Council issue implementing rules of the State Council SR Circular to specify the particular industries that would be covered under the security review. However, the real concern is that lawmakers and relevant administrative authorities prefer to issue regulations using vague language or general provisions rather than specific requirements so that the governmental authorities in charge of the interpretation and implementation of the regulations will have broader administrative leverage and discretion to enforce the regulations. Accordingly, while further clarity will be welcomed in the form of written regulations, it is not likely.

B. Different Attitudes by National and Local Approval Authorities

In practice, MOFCOM's local counterparts have always welcomed foreign investments in local industries and markets. If the State Council and MOFCOM do not specify which industries will be subject to the security review, it is very likely that the local approval authorities, in order to promote the local economy, will approve a foreign investor's acquisition of a domestic enterprise which might, in MOFCOM's view, engage in an industry that is subject to security review. Without specifying the scope and definition of the above terms, both the foreign and domestic partners of an acquisition or merger project will suffer significant economic and reputational losses if the local approval authority supports and approves the project, but MOFCOM challenges the project on the ground of security concern and cracks down after the project has been set up.

A key issue is whether MOFCOM or the State Council will establish a compensation system to indemnify the losses of any foreign and domestic investors whose acquisition and merger project was approved by the local authorities but later suspended or stopped by MOFCOM on security grounds.

Specific unanswered questions on the prefiling consultation include the following:

For foreign investors who are planning to invest in those industries that are likely to fall under security concerns in the PRC, it is advisable that such investors develop a coordinated strategy to address the various regulatory filings and approvals (such as security review filing, pre-merger anti-monopoly filing, and regular approval by MOFCOM's local counterparts).

Parties involved in a merger or acquisition project in the PRC should seek legal advice on how to structure a transaction to meet the new requirements.

i Since then many U.S. commentators on the Unocal issue have criticized the U.S. congressional opposition to the purchase, which was largely focused on national security issues, and have suggested that the real basis for questioning the acquisition should have been on the basis of reciprocity, since a similar acquisition by a U.S. company in China would in all likelihood not be allowed. 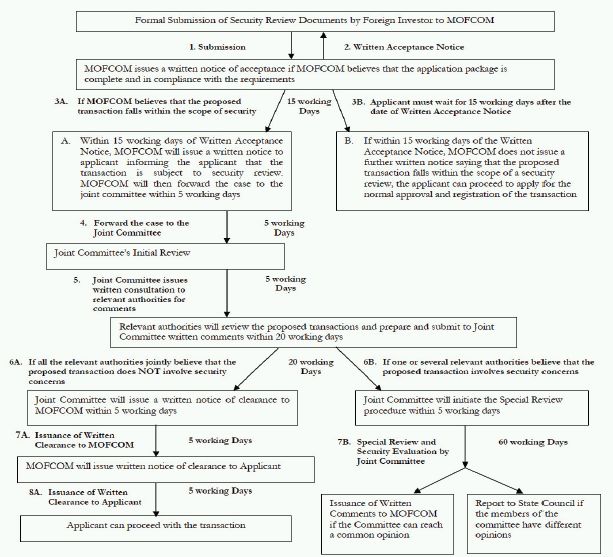 ARTICLE TAGS
China Corporate/Commercial Law M&A/Private Equity Finance and Banking
POPULAR ARTICLES ON: Corporate/Commercial Law from China
Supreme Court Examines The Ambit Of Force Majeure Clause In Agreements
S.S. Rana & Co. Advocates
Section 63 of the Electricity Act, 2003 deals with procurement of power and determination of tariff for the supply of electricity.
Acting in good faith – What does it really mean in a contract?
Holding Redlich
If a party to a contract is to act in good faith, then say so, and then go further and define what good faith is to mean.
Winding Up/ Liquidation Process Under The Companies Act, 2013 Vis-à-Vis Insolvency And Bankruptcy Code, 2016
Khurana and Khurana
A firm (for convenience sake called "CD") regularly supplies certain raw materials to a partnership firm (for convenience sake called "QR")
Directors duties and restructuring options for charities and Not for Profits in the COVID-19 era
BRI Ferrier
Advice for charities struggling in this pandemic including a discussion about temporary safe harbour provisions.
Supreme Court Sets Aside Arbitral Award For Perverse Interpretation Of Contract
Phoenix Legal
Supreme Court Sets Aside Arbitral Award For Perverse Interpretation Of Contract It is settled law that courts should not interfere with awards merely because an alternative view on the facts...
Forfeiture As Compensation Under The Contract Act, 1872
L&L Partners
Forfeiture means loss or denial of something in case if there is a penalty or fine imposed due to an action or an omission by moving away from one's obligations.
FREE News Alerts
Sign Up for our free News Alerts - All the latest articles on your chosen topics condensed into a free bi-weekly email.
Register For News Alerts
Article Tags
China Corporate/Commercial Law M&A/Private Equity Finance and Banking
Related Articles
Merger Control Review 2019 AnJie Law Firm
JV Compliance Issues During The Transition Period Under The New FIL Llinks Law Offices
Three Suggestions For Meeting SCS Compliance Requirements Allbright Law Office
Corporate E-Governance In Shanghai: E-Licenses And E-Seals TMF Group
关于成功召开虚拟股东大会的几点建议 Lawson Lundell LLP
Comparative Guides
Merger Control
Trademarks
Mondaq Advice Centres
Global
Investment Immigration
Global
Trademarks in SAARC Countries
More MACs
Upcoming Events
Mondaq Social Media