The past decade has seen a significant shift in the competitive landscape of China's science and technology sector. From the manufacturing floor to a major contributor to scientific advances and technological innovation, spending on R&D continues to increase and Chinese companies are emerging as genuine contenders to worldwide brands and renowned research facilities.

Against this backdrop, on 13 April 2015, the State Administration for Industry and Commerce (SAIC) released the final version of the Provisions on Prohibition of Abuse of Intellectual Property Rights to Eliminate or Restrict Competition (IPR Regulation) which will take effect on 1 August 2015.

The IPR Regulation comes at an opportune time, and reflects the growing recognition of intellectual property rights (IPR) protection in China. In fact the IPR Regulation was first conceived in 2008 pursuant to the government issued National Intellectual Property Strategy Outline (Outline)1. Its enactment this year represents the fruits of a 7-year-long legislative process, including numerous rounds of public consultation during which issues on the interface between IPRs and competition law were debated and explored.

Another Piece in the IPR-related Antitrust Legal Framework

The IPR Regulation supplements Article 55 of the Anti-monopoly Law (AML) which is the principal rule for IPR-related conduct. Article 55 states that the AML does not apply to companies which exercise their IPRs in accordance with applicable laws and administrative regulations on IPRs, unless the companies abuse their IPRs to eliminate or restrict competition.

The IPR Regulation is the first IPR-dedicated piece of antitrust regulation. However, it will only apply to enforcement action taken by the SAIC, not the National Development and Reform Commission (NDRC) or the Ministry of Commerce (MOFCOM). Notably, the exclusion of provisions regulating pricerelated abuses in the final version of the IPR Regulation means that price-related abuses will remain the NDRC's exclusive jurisdiction.

More recently, towards the end of May 2015, the State Council's Anti-Monopoly Commission announced that the NDRC has been tasked with developing a set of antitrust guidelines, in consultation with the SAIC and MOFCOM. One of the guidelines will address specific issues relating to abuses of IPR which eliminate or restrict competition. It will be interesting to see, in due course, how the new guideline will interact with the IPR Regulation.

Article 5 of the IPR Regulation introduces the following safe harbours to determine whether an IP-related agreement is likely to restrict competition:

The safe harbours are a key feature of the IPR Regulation. They stipulate conditions which act as proxies for measuring the impact of an agreement on competition, which, when met, raise a presumption that the IPR agreement is unlikely to be anticompetitive. The presumption is rebuttable, and parties to an agreement may lose the protection of the safe harbour if there is evidence showing an IPR agreement has the effect of eliminating or restricting competition.

The safe harbours are modelled upon the European Commission block exemption for technology transfer agreements (TTBER), but differ in an important respect. Whilst the TTBER safe harbour2 exempts certain agreements on the presumption they fulfil Article 101(3) of the Treaty on the Functioning of the European Union (the equivalent of Article 15 of the AML), i.e., their benefits outweigh their harm, the IPR Regulation safe harbours fall short of providing justification for negative effects on competition, and accords more limited protection.

Articles 7 – 11 of the IPR Regulation prohibit members of patent pools in a dominant market position from abusing their dominance and provide a list of IPRrelated abuses, including, but not limited to, forcible bundling, exclusive dealing, imposing unreasonable restrictive conditions and discriminatory treatment.

Additionally and despite objections, the SAIC has adopted the essential facilities doctrine. Article 7 sets out three factors that will be considered in determining what constitutes an "essential" IPR:

These factors define and limit the scope of essentiality to an extent, but Article 7 nonetheless augments legal uncertainty around how the tension between IPR protection and competition will be resolved, and when companies will find themselves at the tipping point where the objectives of competition law overtake an essential IPR. 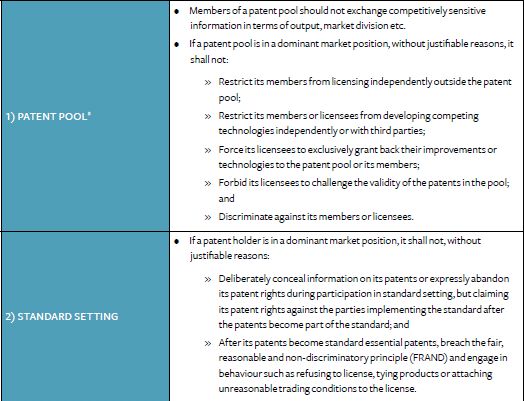 There are issues that remain unclear and it is necessary to cross-reference other IPR-related rules for clarification. For example, with regards to regulation of national standards, the Administrative Regulation on the National Standards involving Patents (Tentative) provides the procedures for disclosure and publication of standard essential patents.

Local and international observers have, in recent years, witnessed a clear and inevitable trend towards a more pro-active approach to IPR-related antitrust enforcement in China. China's developing regime has come under scrutiny as a result of high-profile IPR-related antitrust investigations, civil suits and merger control cases involving foreign companies.

Despite concerns expressed by international IP practitioners, the IPR Regulation is just one of many indications that China will no longer be tolerant of IPR infringements. As China is a key market for multi-national corporations, foreign companies operating in China that hold key assets in IPRs should be wary of the impact of the IPR Regulation and ensure early compliance before the IPR Regulation takes effect on 1 August 2015.

1 The National Intellectual Property Strategy Outline was a high level government strategy issued in 2008. It recognised that there were, at the time, IPR-related abusive practices which impeded fair competition and recommended issuance of specific legislation to regulate the market and protect public interest.

2 See Paragraph 41 of the Guidelines on the application of Article 101 of the Treaty on the Functioning of the European Union to technology transfer agreements.

3 "Patent Pool" refers to an agreement by which two or more patentees jointly license their patents to a third party.