by Ben Meade
Cayman Finance
0 Liked this Article
To print this article, all you need is to be registered or login on Mondaq.com.

The Tax Justice Network (TJN) is once again publishing misleading and inaccurate information about the Cayman Islands and appears to be more focused on entertainment than reality. Its scoring skews results whereby successful financial centres are artificially pushed up the ranking.

The Cayman Islands would not be highly ranked on any secrecy index that is objective, transparent, and based on standards established by global standard setting bodies.

The Cayman Islands actively participates in the OECD Global Forum and supports its collaborative development of global standards, monitoring, and peer review activities that best ensure the standards countries are being asked to follow are fair, objective, transparent, and fit for purpose in the real world.

The Cayman Islands, particularly its financial services industry, has been recognised for decades as a strong international partner in combatting corruption, money laundering, terrorism financing and tax evasion. Cayman has gained a reputation as a transparent, cooperative jurisdiction by meeting or exceeding globally accepted standards for transparency and cross border cooperation with law enforcement.

The Financial Secrecy Index purports to rank each country based on "how intensely the country's legal and financial system allows wealthy individuals and criminals to hide and launder money extracted from around the world". But the report goes on to state that a "higher rank on the index does not necessarily mean a jurisdiction is more secretive". That would mean that it is a Financial Secrecy Index with rankings that are not based on secrecy.

In fact, TJN disregards recognised global standards and global standard setters, as well as the facts about a jurisdiction like the Cayman Islands and instead uses their own, home-made "methodology" seemingly to target pre-selected jurisdictions. TJN purposefully uses outdated, inaccurate and irrelevant information to manipulate the results of its report.

The TJN FSI 2020 is so misleading and inaccurate regarding jurisdictions like the Cayman Islands that organisations should question its validity as a reliable resource to guide their decision-making.

Cayman Finance has conducted a more detailed analysis of the TJN Financial Secrecy Index that further evidences that the FSI and its methodology contain misleading and inaccurate information regarding the Cayman Islands. See below:

Despite its stated support for transparency, the Tax Justice Network uses information and analysis that is outdated, invalid or intentionally misleading to compile its Financial Secrecy Index ranking for the Cayman Islands. Below is an analysis of the fundamental flaws in TJN's 2018 and 2020 Financial Secrecy Index treatment of the Cayman Islands.

Cayman's Rank Based on Inaccurate Information

TJN highlights that a higher rank in the Financial Secrecy Index suggests a jurisdiction enables "secretive banking, anonymous shell company ownership, anonymous real estate ownership or other forms of financial secrecy, which in turn enable money laundering, tax evasion and huge offshore concentrations of untaxed wealth." Based in large part on the supposed combination of these activities, TJN ranked Cayman as the third most secretive jurisdiction in 2018 and the most secretive jurisdiction in 2020. Yet as the table immediately below shows, TJN's application of this conduct to the Cayman Islands is highly inaccurate – and given the ease with which accurate information can be found and assessed, the use is this inaccurate information has to be purposeful. 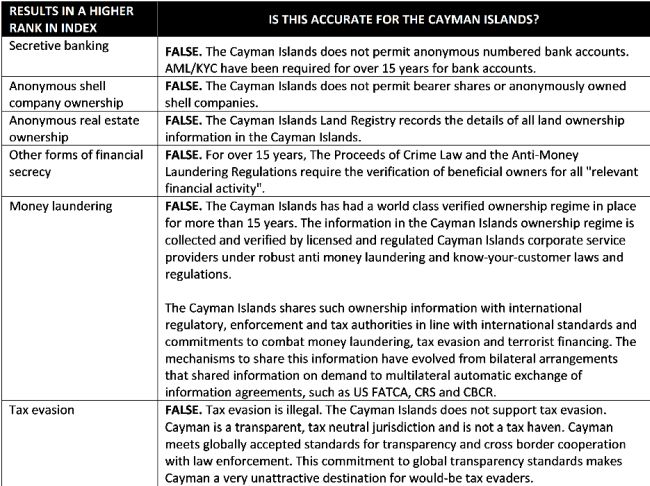 The table provides a general overview of the erroneous theories TJN uses to rank Cayman as a secretive jurisdiction. Both the 2018 and the 2020 Financial Secrecy Index reports also include specific examples of TJN's deliberate use of outdated, invalid or intentionally misleading information as the basis for its assessment of Cayman.

Decade-Old Research. Both the 2018 and 2020 FSIs cite a report by the U.S. Congress' Joint Committee on Taxation to support an allegation that U.S. corporate "foreign earnings and profits" are shifted out of other countries and into Cayman. The report was published in 2010, making the information within it eight years old when TJN included it within the 2018 FSI and ten years old. As noted above, Cayman has no legal mechanism for shifting tax base into the jurisdiction from other countries and Cayman shares tax data directly with the U.S. and other countries, enabling them to conduct more effective tax collection.

Past Tense Data, Present Tense Allegation. In the 2018 Financial Secrecy Index, TJN cited data that it said "suggests that profit shifting to Cayman is increasing fast." (emphasis added).  The basis for the claim that profit shifting was increasing in 2018? A report from 2004 – fourteen years earlier! This accusation would be laughable if the implications of TJN's use of it were not so serious.

100% Irrelevant Standard = 100% Secrecy. TJN's 2018 and 2020 FSIs give the Cayman Islands a 100% Secrecy score for public access to both criminal and civil tax proceedings, which includes an assessment of whether the public can be denied access to protect "tax secrecy, professional secrecy, or comparable confidentiality rules." However, that standard is largely irrelevant to Cayman, which does not have a direct tax system and therefore does not have criminal or civil tax proceedings before criminal or civil courts. TJN's own database of the elements of its score for Cayman includes this specific information from the Cayman Islands Government along with a clear statement that "[t]he judicial system is accessible to the public without restriction for tax, bank, professional or other secrecy." TJN itself even identifies the standard as "not applicable" to Cayman. Yet, the FSI gives Cayman a 100% secrecy score anyway!

Recognised Alternative Tax Models Labelled as "Secrecy." TJN's assessment criteria are based on the notion that direct taxation systems are the ideal model and are the baseline for transparency. However, Cayman operates a successful system of indirect taxation that does not pose harm to other countries' tax bases – an alternative model for taxation recognised by the UN and OECD. But because TJN's methodology does not account for these legitimate differences in tax policy, it arbitrarily ascribes a full secrecy score to Cayman for Key Financial Secrecy Indicators (KFSIs) 1-9, 11, 12, 13 and 14 when the KFSI itself is not even applicable.

Further, Cayman's lack of a "consistent personal income tax," as measured in KSFI 12, has no relationship to secrecy whatsoever. The OECD has even said that a low or zero corporate income tax rate, on its own, is not enough to identify a jurisdiction as being a tax haven. But none of these things stand in the way of TJN getting Cayman to the top of its list.

Disregarding Inconvenient Facts. In 2010, the United States passed a law called the U.S. Foreign Account Tax Compliance Act (FATCA) to require the sharing of information about U.S. taxpayers by international tax authorities with the Internal Revenue Service. Cayman was an early adopter of FATCA, which now includes more than 113 jurisdictions. FATCA is too significant not to at least acknowledge, but Cayman's eager adoption of this major transparency initiative also undermines TJN's effort to define the jurisdiction as "secret." So TJN assess using the model of "when in doubt, throw it out!" Although TJN says Cayman "got credit" in 2015 for signing onto FATCA, TJN decided to just not count the agreement among its 2017 FSI indicators using the excuses that FATCA is "neither multilateral nor reciprocal." FATCA enables the transparency sharing of tax information between tax authorities for the largest economy in the world and the largest hedge fund domicile in the world, but TJN can't smear Cayman as a secrecy jurisdiction so it just ignores the agreement.

Dismissing Multiple Examples of Cayman's Transparency Leadership. As with FATCA, some initiatives are too big for even TJN to ignore – but they are apparently not too big for TJN to just dismiss. The FSI narrative on Cayman says it was "one of the few" to opt for the automatic information exchange option within the European Union Savings Tax Directive, but then quickly dismisses that leadership by saying, "Nevertheless, the EUSTD was very narrowly focused and full of loopholes and hardly impacted Cayman."

Similarly, the FSI says Cayman was, "to its credit, one of the first 20 jurisdictions to sign the agreement committing it to the [OECD's Common Reporting Standards (CRS)]." TJN describes CRS as "the emerging global standard of automatic information exchange, but immediately adds "[e]ven so, information will only be exchanged with selected jurisdictions," including dozens of major countries around the world. So, Cayman is an early adopter of major tax information sharing agreements with leading countries around the world, but somehow manages at the same time to be the world's most secretive jurisdiction according to TJN.

Finally, Cayman abided by the OECD legal framework – the true global standard — for local filling of country by country reports in 2018 and 2020. However, in the 2020 FSI, the TJN gave Cayman the highest secrecy for KFSI #9, Corporate Tax Disclosure, because the jurisdiction didn't go beyond the OECD's internationally-acknowledged global standard.

No Standard? No Problem. Three of the KFSIs TJN boosted Cayman's score on in order to get it to the top spot in the 2020 FSI — #2-Trust and Foundation Register, #8- Country by Country Reporting (CBRC) and #16-Public Statistics — are not aligned to an international standard. In respect to #8 CBCR, the TJN allocates the full secrecy score to Cayman when public CBCR is not required by all companies, despite this not being a recognised global standard.

Cayman Is a Transparent Jurisdiction

The Cayman Islands actively participates in the OECD Global Forum and supports its collaborative development of global standards, monitoring, and peer review activities that best ensure the standards countries are being asked to follow are fair, objective, transparent, and fit for purpose in the real world.