by John Donohoe
Carne Global Financial Services Limited
0 Liked this Article
To print this article, all you need is to be registered or login on Mondaq.com.

Why fund governance is more important than ever

The topic of fund governance has been rising steadily up the agenda on both sides of the Atlantic in the past few years. While issues like the relative independence of directors sitting on the boards of hedge funds in the Cayman Islands has garnered plenty of media attention, the wider asset management industry is also being asked to address governance issues by regulators and investors.

The guidance and research contained in this study were prompted by the 'Dear CEO' letter published by the then Financial Services Authority (now the Financial Conduct Authority) last year, which drew specific attention to the sometimes inferior management of conflicts of interest at UK-regulated fund management firms, as well as the SEC's public statement that it is a key focus area for them. Anecdotal evidence collected by Carne from institutional allocators in the last 12 months has also demonstrated an awareness on the part of operational due diligence professionals that more should be done to manage conflicts of interest at long only fund management firms.

"Conflicts of interest exist throughout the commercial world. They are a particularly important challenge for large and complex financial institutions, which can have affiliations that lead to a host of potential conflicts of interest. If these are not carefully managed, this then leads to failure to protect the client's interests, with attendant regulatory and reputational risks that could be disastrous." 1

It is important that funds and their boards, as customers of the investment manager, are aware of what conflicts of interest procedures are in place within the investment manager, how they are managed and how they are reported to the funds. Funds themselves, their boards and their directors also have conflicts of interest which should be identified, documented and managed. Boards should be taking a proactive approach by engaging with the fund manager and helping the manager to demonstrate to regulators and investing clients that conflicts management is a high priority.

Ultimately, fund boards can independently document conflicts management processes and demonstrate that the fund and the investment manager are being held to high levels of governance and transparency.

The first part of this study contains the results of a survey conducted by Carne of major allocators to long-only and alternative funds in H1 2013. With this research we have sought to define investor opinion, including the thoughts of pension funds, consultants, funds of funds and sovereign wealth funds, on the critical topic of conflicts of interest. The findings represent a clear indicator of investor opinion on conflicts within asset management firms and the role fund boards should be playing to mitigate these risks.

The second part of this study helps to define some of the conflicts that can commonly occur within funds and the investment management business and offers some advice on how these can be managed, both by fund managers themselves as well as by fund directors and investors.

Much has been done over the last few years to improve fund governance, but investors currently rate fund governance as 5's and 6's out of 10 in most regions rather than the desired 8 to 9 (see page 11).

The clear majority of investment managers should want to demonstrate excellence in fund governance both within their firms and within the funds they promote. This survey should provide guidance on how this can be achieved.

Asset managers should also consider if a global governance code should be developed by the industry as suggested by investors (see page 14). Investors have clearly stated that they would prefer industry solutions rather than more regulations.

I would like to thank all the investors who gave of their time to provide us with their valuable feedback, including Aon Hewitt, CalPERS, BBC Pension Trust, Cambridge Associates, Florida State Board of Administration, Future Fund of Australia, Mercer, Royal Bank of Scotland Pension Fund, SEB, Skandia Group and Towers Watson.

Part One: Conflicts of Interest Survey

In the first half of 2013, Carne interviewed major allocators to both long only and alternative funds on the issue of conflicts of interest at the fund level. The issue has become an increasingly important area of focus for global regulators and is a topic of growing concern for investors.

By conducting this research, we were seeking to discover what investors' views were on potential conflicts of interest at the fund level, and how investors expect fund boards to play an active role in identifying and managing those conflicts. As fund governance has moved up the regulatory and allocator agenda, so the role of fund boards and the directors sitting on those boards has come under scrutiny.

The results provide a road map for fund boards and investment managers, indicating what investors expect to see, including their preferred board composition and activities.

Carne interviewed a range of different major institutional investors in regulated and unregulated funds, including pension funds, pension consultants, funds of funds, private banks and sovereign wealth funds. Together they comprise over $9.5 trillion in assets under investment / advice.

The respondents allocate to a wide range of funds, including long only and alternative strategies managed in various types of structures in domiciles including Luxembourg, Ireland, US, domestic European jurisdictions such as the UK and other EU countries, and offshore centres such as the Cayman Islands. 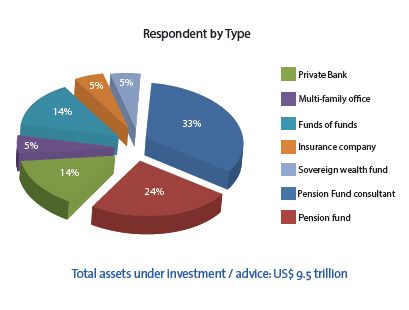 Section One: Importance of fund governance

Q1: As an investor, how important is fund governance to you?

Fund governance remains an issue of great importance to fund investors. Allocators interviewed for this study were asked whether they viewed governance as: 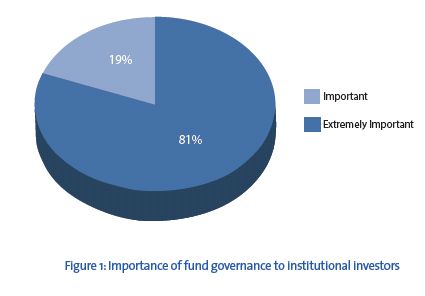 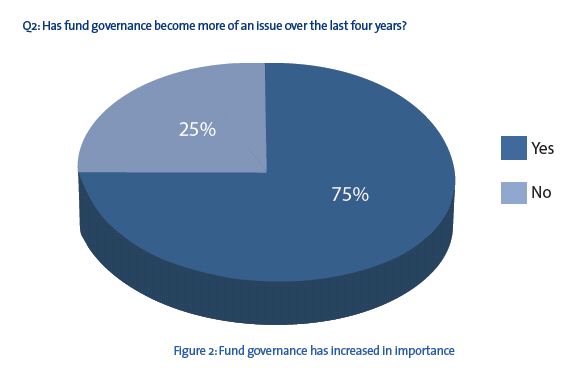 Fund governance has continued to grow in importance since the 2008 financial crisis. While for some investors it has always been a critical issue, the bulk of allocators are now much more focused on this issue. One of the contributors to this survey described it as "an undiversifiable risk factor."

The investors interviewed for this study felt that governance was an extremely important issue for fund boards, and that the events of 2008-09 had demonstrated that experienced fund board directors were needed to help to protect investors' interests.

A number of respondents, particularly pension funds and sovereign wealth funds, voiced their desire to see improved governance in the asset management industry. Some of the respondents expressed a desire for better education of institutional investors relating to corporate governance issues and structures.

Increased volatility in the markets and the enhanced complexity of governance as a legal and regulatory issue are also important factors causing institutional investors and consultants to focus more attention on governance. 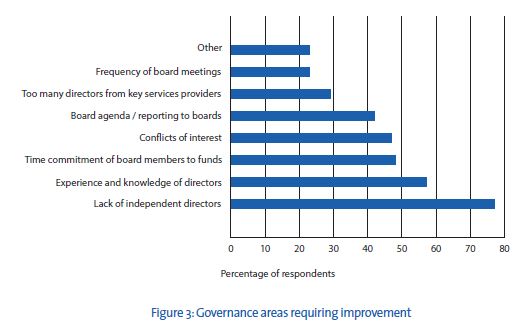 Investors are extremely focused on the role played by fund boards and see the lack of experienced independent directors as a critical governance failing for both long only and alternative funds. Investors pointed out that many fund domiciles such as the US (for non-40 Act funds), Luxembourg, Cayman Islands and the UK do not require any independent directors on a fund board.

Other concerns expressed also include:

We also asked investors to rate the perceived overall level of governance for funds out of 10, with 10 being the highest. Investors only provided feedback for those regions where they had operational due diligence experience of managers and funds. Of most significance is that while funds managed by continental European managers (excluding Switzerland, which was rated separately) score higher on average than US managers, they still lag UK managers by a significant margin.

To view this article in full please click here.

1 Conflicts of Interest and Risk Governance, speech to the National Society of Compliance Professionals, 22 October 2012.