When I visited Cayman in April 2015 to launch the latest edition of AIMA's Fund Directors' Guide – arguably the definitive guide to hedge fund directors' roles and responsibilities – I was struck by the level of interest in this area, as reflected by the large turnout that our event at The Ritz-Carlton, Grand Cayman generated. So many changes have come on stream since the global financial crisis that there is considerable demand for information and guidance from current or prospective hedge fund directors, investment managers and fund promoters in Cayman and around the world.

The Guide, last published in 2008, takes account of regulatory and tax reforms since the financial crisis, such as the Alternative Investment Fund Managers Directive (AIFMD) and the Foreign Account Tax Compliance Act (FATCA), which have brought significant changes to the role and responsibilities of fund directors and boards.

New sections have been added covering, among other topics, the general approach to fund governance, monitoring of trading practices and business continuity planning. Practical, legal and tax considerations when selecting and appointing fund directors are considered. The basic tasks that fund directors should carry out are explained, while issues relating to the way in which fund directors manage their relationships with the fund's service providers are also discussed. Guidance is provided on several important issues, including, for example, the review of annual audited accounts and issues relating to directors' and officers' liability insurance. In addition, the Guide assesses the impact of taxation on the fund, its service providers and its directors.

The Guide can be downloaded by AIMA members from the AIMA website.

The decision to launch the guide in Cayman, of course, was no accident. We have many member firms in Cayman, and there has been an AIMA 'National Group' or chapter in the jurisdiction for almost a decade. In terms of offshore hedge funds, Cayman remains an absolutely key domicile for the global industry, which we represent.

AIMA has been in existence for only slightly longer than Cayman's fund industry. This year marks the 25th anniversary of our association. Founded in Europe back in 1990 by a small group of managers realising the need for mutual representation, AIMA has grown into a truly global organisation, with the majority of its 1,500 corporate member firms now based outside Europe's borders. The global nature of investing, trading and regulation means our relevance today is as high as it has ever been. By the same token, the first funds legislation in Cayman, passed in 1994, helped to lay the groundwork for the jurisdiction's status today as a leading fund domicile and international financial centre.

Indeed the growth of AIMA in terms of membership and staff reflects the growth of the global hedge fund industry. In 1990, we had only a parttime secretary and in 1994, we were still operating out of shared office space in Paris. As recently as 2005, by which time our head office had relocated to London, we still had only eight staff members.

Today, we have a total of 35 staff; 25 in the London head office and a further 10 in our representative offices around the world. Much of this additional resource has been added since the global financial crisis. The world changed in 2008/2009, and with it, AIMA changed too. Following the crisis, we built new structures and brought in new people to address the challenges posed by the crisis and the regulatory reforms that followed.

The Government and Regulatory Affairs department that we established after the crisis comprises former law firm partners and regulators. It provides members of AIMA with guidance notes and updates on complex initiatives, detailing how developments may affect their business and the advocacy positions that we are adopting. With our public affairs work on the ground in the main financial and political centres, we are able to engage in extensive advocacy in the best interests of the industry.

Our communications team coordinates our engagement with the media globally and works closely with the industry to demonstrate the value of hedge funds to investors, financial markets and the 'real' economy.

At the very top of the organisation, we have had seven Chairs, some serving for five years, and only three Chief Executive Officers in our 25 years. I myself took over as CEO in February 2014.

From small European beginnings, an impressive international network encompassing Asia-Pacific, EMEA and the Americas has been constructed. Our members now come from over 50 different countries. The US has the dominant market share in the industry and represents over 50% of the aggregate AUM of our global membership; our Americas presence is further augmented by the existence of our National Groups in Canada and Cayman as well as our activities in Brazil. In Asia-Pacific, we have National Groups operating in Hong Kong, Singapore, Japan and Australia, all now combining under a single regionally focused operation.

Our members are the backbone of the association and comprise both the largest and smallest firms around the world. Over 800 of our member contacts (roughly 10% of the total membership), representing about 370 firms, contribute to our more than 70 committees and working groups around the world. These groups tackle advocacy, help us draft our regulatory submissions, drive our sound practices work and support the development of other vital industry tools.

Our focus on education and sound practices has resulted in a substantial body of work for investors and practitioners alike. The first AIMA due diligence questionnaire was issued in 1997, and has gone on to become the industry-standard DDQ, covering the selection of hedge fund managers, clearing members, prime brokers, CTAs/managed futures funds, fund of hedge funds managers and administrators.

Our first sound practice guide was published in 2002, and our library of guides cover hedge fund management, valuation and asset pricing, administration, governance, business continuity, due diligence for managers and service providers and fund of hedge funds managers, not to mention our Fund Directors' Guide.

We organise many additional events in Cayman and other jurisdictions, which provide helpful intelligence to delegates and networking opportunities. In 2014, we held over 180 events worldwide, with a total attendance of well over 10,000.

AIMA regards the global hedge fund industry as a valuable contributor to the global economy. We provide a global forum for members to establish a common adherence to industry sound practice. Our goal remains to maintain a fair and functioning environment allowing alternative asset managers to contribute to growth through capital markets activities. AIMA stands for investor protection, global consistency of regulation, market efficiency and integrity and the mitigation of systemic risk by maintaining diversity of business models within the financial sector. AIMA works this through advocacy, awareness and education among policymakers, investors, regulators, the media and the wider public.

Above all, AIMA remains a "people organisation". Crucial to everything AIMA does are its members, its network and its staff. The voluntary work provided by all who contribute in committees and working groups, who sponsor and host our events and facilitate our product offering is a priceless feature of the AIMA toolbox. Without our members, in Cayman, the US, Europe, Asia and elsewhere throughout the world, there would be no AIMA. 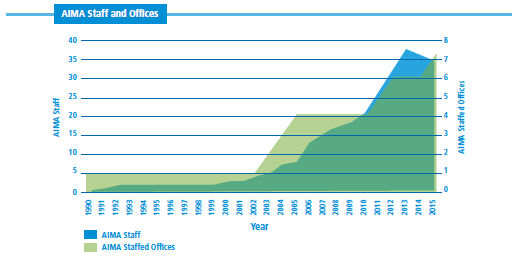 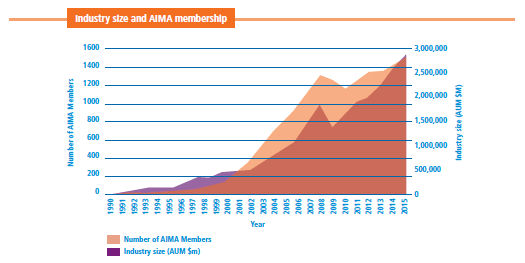 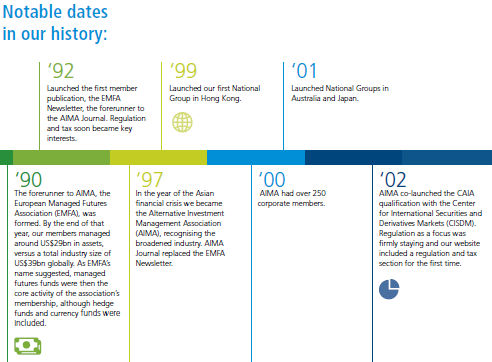 Jack Inglis became the chief Executive Officer of AIMA in February 2014. He has been involved with hedge funds for 25 years and has held leadership positions in prime brokerage at both Morgan Stanley, where he served for 16 years, and Barclays, where he was prior to joining AIMA. From 2007 to 2010 he was CEO at the convertible bond specialist, Ferox Capital Management. He began his career in 1983, and has extensive experience across origination, distribution and trading across the capital markets. He holds a Master of Arts in Economics from Cambridge University.