In August 2016 Brazil will be the focus of attention for billions of people from around the world, who will watch the Olympic and Paralympic Games being held in Rio de Janeiro. The sponsorship of these events costs between US$100 million to US$10 million for each company. For this reason many companies who do not have the money or opportunity to become official sponsors, still want to benefit from the massive audience of the event in an unofficial capacity. But any unofficial connection with the Olympic and Paralympic games is actually Ambush Marketing.

The International Olympic Committee (IOC) defines ambush marketing as "any intentional or unintentional attempt to create a false, unauthorized commercial association with a brand or event, in this case Rio 2016 and the Olympic and Paralympic Movements." It may also be considered as "any marketing strategy in which the participant associates itself, and therefore benefits from, a particular event, without paying the required sponsorship."

Even the official sponsors must take care not to go beyond the authorization of the IOC to associate themselves with the Olympic and Paralympic events. The rules concerning the use of the IOC's trademarks are very restrictive and even those who pay US$100 million to become official sponsors may be guilty of ambush marketing. Advertising is banned from inside all stadia hosting events and even Federal buildings, such as airports. For example, during August 2016 the Rio de Janeiro International Airport will not exhibit any advertising whatsoever, whether related to the Games or not.

There have been many examples of Ambush Marketing over the last 30 years:

In the 1992 games, REEBOK was the official sponsor of the USA men's basketball team, much to the dislike of NIKE, who had always been the sponsor of the US basketball star, Michael Jordan. During the medals ceremony, Michael Jordan covered the REEBOK trademark he was wearing with the American flag. Deliberately covering the trademark of an official sponsor, albeit with the US flag, must be considered an illicit act for the purposes of Ambush Marketing.

In the Olympic Games in London in 2012 the bookmaker Paddy Power used Billboards to announce that they were the "official sponsors of the largest athletics event in London" that year, with the caveat stating that they were referring to London, France. Paddy Power had indeed sponsored an athletics event in London, France, with the express purpose of misleading the public in an amusing way. The IOC had the good sense not to take any action against Paddy Power, who would no doubt have enjoyed the opportunity of some free "bad" publicity.

This year in Brazil, the Federal Authorities have a legal obligation to suppress acts of Ambush Marketing, due to Article 6 of the Olympic Act. (Law Nº 12.035 / 2009):

"Federal Authorities are responsible for controlling, overseeing and suppressing any unlawful acts which violate the rights of the trademarks used in connection with the Rio 2016 Games. Sole Paragraph. For the purposes of this Act the trademarks of the related to the 2016 games are:

III. the name, emblem, flag, anthem, motto and trademarks and other symbols of the Rio 2016 Organizing Committee; and

The Design Trademarks protected are: 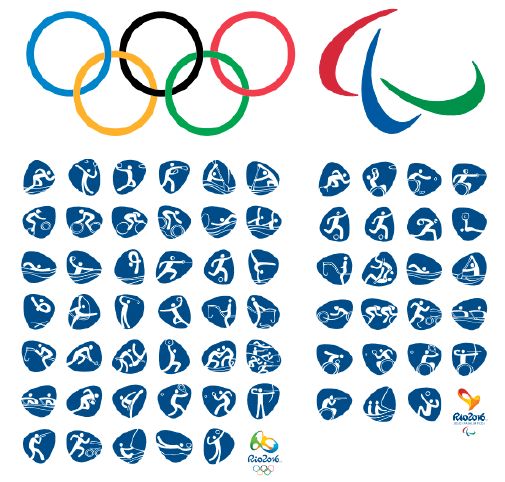 Although it may be considered reasonable to prohibit use of the Design marks of the IOC, or the marks OLYMPIC GAMES, PARALYMPIC GAMES, extending the prohibition to RIO 2016 seems excessive. Anyone daring to hold an event in Rio this year must avoid any reference to RIO 2016 or face the wrath of the Federal Authorities.

But is the protection conferred on the IOC really necessary? To associate yourself to the Olympics or Paralympics without authorization could be prejudicial to the investment made by the official sponsors. The Olympic and Paralympic Games in Rio de Janeiro will cost more than US$1.36 billion (with a further US$5.8 billion being spent on public transport projects). Half of the money the IOC has received from sponsorship and licensing has gone towards the expenses with the Olympics and Paralympics Summer games in 2016 and the Winter Games held in Sochi in 2014. The IOC itself states that "The success of the Games chiefly depends on the support of commercial partners. They acquire sponsorship quotas, licensing, concessions and box office, among other possibilities, and thereby are entitled to associate their brands, products and services with the Olympic and Paralympic brands, as well as to that of Rio 2016."

In principle, the protection of the IOC's trademarks is essential to help finance the Games, and so the measures to prevent the unauthorized use of their trademarks becomes indispensable. The Games require billions of Dollars of investment and the failure to protect the interests of the sponsors could prejudice future events. Which company will invest US$ 100 million if their competitors will benefit from the same event in the same way without spending a penny?