by Alexandre Pierantoni , Robert A. Bartell and Luis Maluf
Duff and Phelps
0 Liked this Article

While Brazil still faces political uncertainty with its upcoming presidential election in October, the country's economy is rebounding, with investment and mergers and acquisitions activity showing strong momentum.

After consecutive quarters of declining activity, mainly due to political and macroeconomic uncertainties, the Brazilian M&A market is bouncing back. Headwinds and tailwinds continue to impact the market, but local and global investors are beginning to see positive returns on investments.

According to data from Bain & Company and PitchBook, 2017 global M&A activity grew to $3.3 trillion in total deal value, with 38,500 deals (resulting in an average deal size of $85.7 million). Concurrently, Brazil had a 9% growth in the number of companies being bought and sold, achieving a record of 856 transactions with a combined deal value of approximately $87.3 billion, according to Fusões & Aquisições. This also represents a 4.8% increase in Brazil's deal volume compared to 2016. Brazil's average deal size of $101.9 million in 2017 was strongly affected by more than 10 multibillion-dollar deals announced in that year. According to Fusões & Aquisições, prior to 2017, the historical average deal size ranged from $30 million to $40 million. 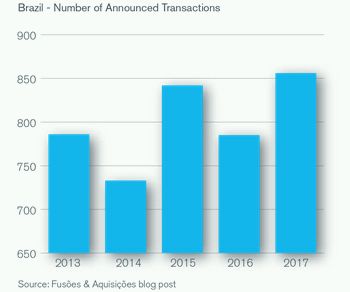 Many large deals were completed in Brazil in 2017, mainly due to Brazilian conglomerates in need of restructuring. Examples include Paper Excellence's acquisition of Eldorado Papel e Celulose; State Grid's acquisition of CPFL Energia; and China Three Gorges' acquisition of Central Hidroeléctrica Chaglla, an Odebrecht investment in Perú. The current environment has changed from 2016 and 2017 when foreign investors, private equity and Brazilian holding companies acquired businesses of conglomerates or public companies with cash flow pressure, who needed to sell given their excessive debt and limited access to credit lines.

Opportunity for growth also awaits Brazil's private equity and family office investments. In 2017, global private equity activity represented some 13% of the M&A value and 8% of the number of completed deals, and family offices represented some 3% ($100 billion) of the total M&A value. According to PwC, private equity was involved in some 15% of the announced deals in Brazil over the past 7 years. With regard to family offices, it is likely that the same four-fold increase observed globally — from $25 billion in 2011 to $100 billion in 2017 — will be seen in Brazil in the coming years.

Local and multinational strategic players are reviewing their portfolios and identifying new opportunities as well as areas for consolidation. Financial investors (private equity and their newest competitors, family offices) are analyzing investment opportunities with platform and consolidation strategies. Total M&A activity will likely grow over the coming years as multisector investments are made to improve Brazil's infrastructure inefficiencies in the healthcare, education, and logistics sectors. Additional investments and consolidation opportunities may arise in consumer products, retail, IT, distribution and agribusiness. 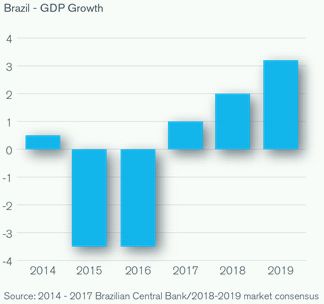 This momentum contrasts with the scenario of recent years, when Brazil experienced the impeachment of President Dilma Roussef, corruption probes and political scandals. Despite an uncertain outcome for the Brazilian presidential elections in October, the Brazilian economy demonstrates that it has, for the moment, broken the connections between political and economic performance. The unemployment rate (12.7% at the end of 2017) is declining, and industrial and consumer confidence ratios are rallying. Despite the turbulence in 2017, some structural reforms (e.g., a government spending cap and labor reform) were championed by the government and approved by Congress. Pension reform, of paramount importance to reduce government deficits, will likely be on the next president's agenda, although current President Michel Temer will continue to push for its approval, along with other reforms. These reforms are essential to reducing the government's gross debt, which currently, according to Brazilian Central Bank data, is at a record high of 74% of GDP (more than 20 percentage points higher than what was observed in 2013, when it was 52% of the GDP).

Transactions like the $14.6 billion acquisition of Fibria Celulose SA by Suzano Papel e Celulose SA; State Grid Corp's acquisition of CPFL Energia SA for approximately $4.5 billion; and the still ongoing negotiations between Boeing and Embraer about a potential commercial aviation partnership demonstrate that, although Brazil's political environment is still volatile, there is business to be done.

The equities market and initial public offerings (IPOs) will likely suffer more with the unpredictable conditions, but limited impact is expected in the M&A market, which is driven by long-term strategies. The Brazilian stock exchange, B3, reported 11 IPOs and approximately $7.1 billion raised in 2017 and is currently trading at record-high levels (85,000 points), with 10 companies expected to go public in 2018.

After two years of economic and political crises, Brazil now has strong institutional and independent regulators and agencies, supported by an active judiciary system. The country and its business community are capitalizing on the positive momentum and investment opportunities bolstered by tailwinds, bringing back the strong operating environment seen in 2010 - 2011.

Robert A. Bartell
Duff and Phelps