Most Read: Contributor Austria, May 2020

by Peter Feyl and Gergely Szalóki
Schoenherr Attorneys at Law
0 Liked this Article
To print this article, all you need is to be registered or login on Mondaq.com.

As recent developments have shown, it is highly unlikely that the EU Capital Requirements Regulation (CRR) on credit institutions and investment firms, which aims to put in place a comprehensive and risk-oriented regulatory frame work through out the EU, will enter into force on 1 January 2013 in the whole European Union (even though some EU Member States would be ready to implement Basel III as at 1 January 2013). Still, the implementation of Basel III is imminent. The goal is a sounder and safer European financial system. As the global financial crisis revealed the short comings of the current regulatory environment as to the prudent operation of the European credit institutions, the CRR envisages stricter rules for institutions' own funds, liquidity and leverage.

The impact of the CRR on the own funds is shown in the graph below. 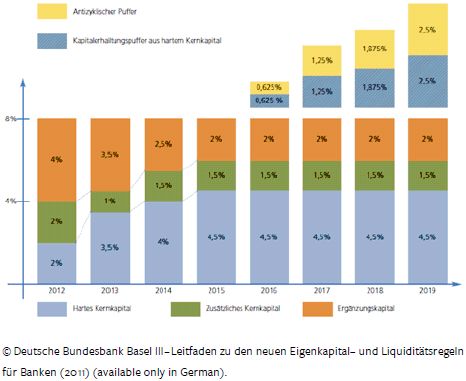 More and better-quality own funds

The CRR aims to increase both the quality and quantity of the institutions' own funds by increasing the ratio of own funds institutions must hold and by restricting which instruments count as core equity. Under the current Basel II rules as introduced into European law, institutions and investment firms must hold a minimum of aggregate own funds of 8% of the risk weighted assets. The CRR will request significantly higher ratios of truly loss sharing and loss absorbing capital. Credit institutions will need to hold own funds of the highest quality – common equity tier 1 (CET1) – of 4.5%. Hybrid instruments that proved to be not truly loss absorbing in the financial crisis will not count as CET1 (but may still be eligible as Additional Tier 1 if they contain certain features or are amended accordingly). In addition, each credit institution will need a 2.5% CET1 capital conservation buffer. Even though the formal own funds requirement remains at 8%, it will in fact be 10.5%: 6% Tier 1, 2.5% capital conservation buffer and 2% Tier 2 (such as supplementary capital). Banks of systemic importance will even need 9% CET1.

The Commission's impact assessment1 shows that the short and medium term disadvantages to the institutions' profitability and to pay dividends is expected to be balanced by the long-term economic benefits that stem from the reduction in the expected frequency of future systemic crises.

To enable the institutions to prepare for the new set of rules, and to take all steps necessary to adjust (ie, increasing their capital by issuing new equity and/or retaining profits and/or reducing their risk-weighted assets), the new capital requirements envisage a transition period. This grandfathering also means that the negative effects of the new regulation on the profitability of the institutions will build up during a longer period instead of hitting them at once.

The grandfathering section of the CRR applies only to the instruments that were issued prior to 20 July 2011, which is the date of adoption of the CRR proposal by the Commission. Such instruments qualify as own funds, as in the past, but the amount of such instruments by which they may be taken into account will be limited to a certain percentage, as stipulated by the competent authorities within the ranges as set forth in the CRR, and decreases gradually over time. The European Banking Authority will develop draft regulatory technical standards to specify the conditions for treating the "old regime" instruments as the respective capital type under the CRR during a 10-year period from 1 January 2013 to 31 December 2022 (the CRR contains in a number of article-specific man dates for the European Banking Authority to develop such technical standards covering specific issues).

During the 10-year transition period the applicable percentage will be lowered year by year, forcing the institutions to gradually supplement the capital fallen out with instruments that qualify as the respective capital type under the CRR. During the transition period, the institutions may take into consideration such "expired" capital (ie, those parts exceeding the applicable percentage) in the lower ranks to the extent that the inclusion of that capital qualifies under the new rules (eg, former Tier 1 capital as Additional Tier 1 or Tier 2 capital) does not exceed the percentage limit applicable to such lower rank.

As to hybrid capital (ie, forms of capital instrument that have features of both debt and equity instruments), such instruments are not considered to be sufficiently loss absorbent; thus, the CRR set forth a very detailed set of conditions and stricter criteria for their inclusion in the Additional Tier 1 capital. Instruments that do not meet the criteria will qualify as Tier 2 capital. To qualify as Additional Tier 1 capital, all such instruments must absorb losses by being written down or converted into "true" CET1 instruments, when the key measure of the institution's solvency falls below 5.125%.

Instruments subscribed for by governments as capital during the financial crisis have different transition periods. Those instruments will fully count as own funds of the same quality as at present until 31 December 2017 if the relevant instrument was considered by the Commission as compatible with the provisions of the EU Treaty. The CRR again sets forth detailed criteria for categorizing such instruments according to the categories created by the CRR.

The purpose of the CRR is to ensure that financial institutions, being the core of the EU financial system, are safe, sound and resilient to adverse market events. It is the clearly articulated goal of the EU Commission that the governments (and their taxpayers) will not have to bail out financial institutions in the future. The crisis provided grounds for such changes to the capital requirements regulation as envisaged in the CRR, which places more burden - some criteria on the regulated institutions. Thus, the question may arise whether the tendency of moving the risk to other less regulated areas (eg, "shadow banks") will be strengthened by the introduction of the CRR. If so, what will be the consequences for the financial system?

The purpose of Basel III is to ensure that financial institutions, being the core of the EU financial sys tem, are safe, sound and resilient to adverse market events. Still, existing own funds instruments that do not meet the stricter Basel III and CRR criteria will be phased out only over a (generally) 10-year period.

"The purpose of the CRR is to ensure that financial institutions, being the core of the EU financial system, are safe, sound and resilient to adverse market events."

This article was originally published in the schoenherr roadmap`13 - if you would like to receive a complimentary copy of this publication, please visit: pr.schoenherr.eu/roadmap.