Hungary: Wait-And-See? - Litigation Statistics Of The New Civil Procedure In Hungary In 2018

"I only believe in statistics that I doctored myself" goes the famous quote attributed to Winston S. Churchill. Well, it is out of question that the late British prime minister has not participated in the publication of the Hungarian Court Statistics for 2018, it is worth to have a look at the figures, how the New Civil Procedure Code has changed the litigation landscape in 2018 in Hungary.

The main changes of CPC

Before jumping into the details, it is worth to recall the main changes introduced by the New Civil Procedure Code (CPC) entered into force from 1st January 2018, in order to speed-up litigations in Hungary.

The most radical change of the new regime is the division of the first instance procedure into two parts, the so-called preparatory phase which aims at defining the frameworks of the legal dispute, and the trial phase where e the so-called evidentiary procedure ( e.g witness or expert hearings, etc.) is conducted. Each phase has its on rules of games.

This is well represented by the provisions regarding modifying claims and counterclaims and submitting motions for evidence, which is possible in the preparatory phase, but significantly limited in the trial phase, while the "old regime" allowed these procedural tools until the end of the whole first instance procedure.

The new regime is also characterized by strong restrictions on party-autonomy, through sanctioning the delay or non-compliance of the parties with the strict procedural rules with dismissing claims and imposing pecuniary fines.

Practitioners from the whole country reported that lower courts apply the new rules "too strictly" making the starting of litigation a real challenge for legal representatives.

Now let's see how the above rules influenced the parties' willingness to start litigations, and the efficiency of courts.

On the level of the whole court system, the number of new litigations felt back with cca. 20% in comparison with the figures in 2017.

Coming more closer to the civil and business litigation in front of the local courts, the figures show even a more significant setback. In civil and business matter the decrease is cca. 25% from 2017 to 2018, and it seems that the changing legal environment produced the most significant deterrent effect on employees, since less then half of the cases has been started in 2018 in comparison with the previous year. 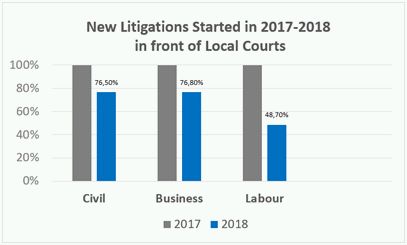 However, the full civil and business litigation landscape can be interpreted only if we take into account the new cases brought before the Regional Courts as well, because in Hungary these are competent to act at first-instance in more complex matters, like intellectual property, international transportation, or corporate law related disputes, and in high-volume litigations, too. 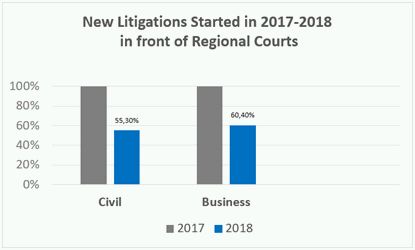 At Regional Court the shortfall of new cases is almost 50%, which clearly shows that parties did not want to engage in a difficult court case under the new rules of game, and adopted a "wait-and-see attitude" until the court practice clarifies the most important yet unclear questions. (E.g.modification of claims, and submitting new motions for evidences in the preparatory and trial phase of the first instance litigations).

While the setback in terms of new cases was predictable to some extent, the figures show a very interesting phenomenon regarding the number of closed litigations. We could assume that due to the low number of new cases in 2018 the judges had more time to close ongoing ones.

However, the number of closed cases in 2018 has also decreased in comparison with 2017 in front of the local courts. This decrease is shown most significantly in labour matters, where only 70% of the cases was finished by the judge compared with the previous year. 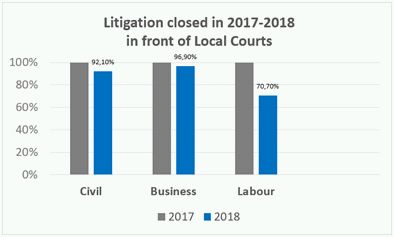 At Regional Court level this phenomenon is even more detectable, since in 2018 the judges finished only 2/3 of their cases in civil litigations and 4/5 of the cases in business litigations in comparison with 2017. 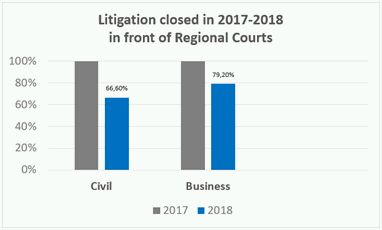 To sum up the above statistics, we can draw two conclusions based on the first year of the new Civil Procedure Code in action.

Based on the above phenomena, in March 2018 the Hungarian Supreme Court has decided to set up a practice group to analyze the too restrictive practice of lower courts at the starting phase of the litigations, with the aim to provide guidance on important questions, and make litigation more attractive again to parties.

We hope that the practice group of the Supreme Court will contribute to the change of the recent trend.

ARTICLE TAGS
Hungary Litigation, Mediation & Arbitration Civil Law Court Procedure
POPULAR ARTICLES ON: Litigation, Mediation & Arbitration from Hungary
Bodybuilder Punished For Being Koi With The Truth About Pond-Fall Injuries
Clyde & Co
Bodybuilder Ben Bardsley, a company director and gym owner, has been found fundamentally dishonest in relation to a fraudulent claim he made against a Warrington-based supplier of fishponds.
Does The "Dominant Purpose" Of A Communication Have To Be The Giving Or Seeking Of Legal Advice In Order For It To Be Privileged?
Shepherd and Wedderburn LLP
Legal advice privilege is the right to withhold disclosure of documents or information.
Vicarious Liability: High Court Considers Liability For Historic Sexual Assault Claim
Clyde & Co
Pending the long-awaited Supreme Court judgments on the appeals in Barclays Bank and WM Morrisons, the High Court has recently handed down a judgment demonstrating how the current...
Court Clarifies When Confidentiality And Privilege Can Be Lost Over A Document Referred To In Open Court
DLA Piper
In SL Claimants v Tesco plc [2019] EWHC 3315 (Ch), the High Court has held that a solicitor's attendance note did not lose privilege despite the note being disclosed
Court Of Appeal Finds Legal Advice Privilege Is Subject To A "Dominant Purpose" Test
Herbert Smith Freehills
In a decision handed down earlier this week, the Court of Appeal has found that legal advice privilege (LAP) is subject to a "dominant purpose" test.
Pest Control – Containing Japanese Knotweed Claims
DAC Beachcroft LLP
We are still seeing a high number of Japanese knotweed claims against surveyors.
FREE News Alerts
Sign Up for our free News Alerts - All the latest articles on your chosen topics condensed into a free bi-weekly email.
Register For News Alerts
Article Tags
Hungary Litigation, Mediation & Arbitration Civil Law Court Procedure
Related Articles
International Arbitration Comparative Guide Schoenherr Attorneys at Law
Die Zwangsvollstreckung in Ungarn Teil 2. Katona & Partners Attorneys at Law
Interim Measures In Hungarian Arbitration Proceedings SMARTLEGAL Schmidt&Partners
Warning! Growing Costs Of Cross-Border Litigations In Hungary SMARTLEGAL Schmidt&Partners
The Constitution Of The Arbitral Tribunal In Hungary SMARTLEGAL Schmidt&Partners
Comparative Guides
International Arbitration
Mondaq Advice Centres
Global
Investment Immigration
Global
Trademarks in SAARC Countries
More MACs