Our tax litigation team recently had the opportunity to assist a taxpayer in an appeal for the reversal of a decision issued by the Luxembourg tax administration ("LTA") that considered that the interest on a profit participating loan ("PPL") was excessive, and that requalified a portion thereof into a hidden profit distribution subject to a 15% withholding tax.

This case is of particular interest given that it is the first judgement analysing the compliance of the variable interest of a PPL with the arm's length principle. The Administrative Tribunal of Luxembourg ("Tribunal")1 confirms that the interest rate of a PPL may be justified by a comparison with the arm's length interest accrued during the same period on a similar fixed interest loan. It also acknowledges that any value in the interest rate range determined by the economic analysis satisfies the arm's length principle. Finally, the decision recalls the binding character of an advance tax confirmation ("ATC"). This decision is final.

In 2013, a Luxembourg company ("LuxCo") affiliated with a major investment firm financed a participation ("Participation") in an Irish company by a mix of debt and equity, complying with the then-commonly accepted debt/equity ratio of 85/152 for the financing of participations. The debt was granted by the sole shareholder, a Jersey company, under the form of a PPL that carried a fixed interest of 25bps and a variable interest corresponding to 99% of the profits derived from the Participation, net of any expenses (including the fixed interest), losses and a profit margin. 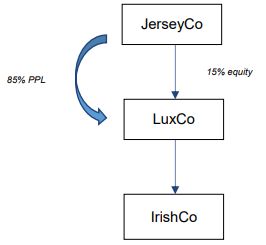 In June 2013, LuxCo had filed an ATC request with the Luxembourg tax administration ("LTA") seeking a confirmation concerning the tax treatment of the PPL, in particular that the interest under the PPL should not qualify as a hidden profit distribution subject to the 15% dividend withholding tax.

In a letter dated 28 March 2014, the LTA approved the ATC request under – amongst others – the following conditions:

It should be noted that those reservations are systematically indicated by the LTA as, in the meantime, the law has come to limit the validity of ATCs to 5 years3, while providing for specific advance pricing agreements instead of ATCs4 to address questions pertaining to transfer pricing, such as interest being set at arm's length.

In 2015, LuxCo received a dividend of EUR 30 million from its Participation and booked a variable interest on the PPL of EUR 29,630,038 in its accounts.

Following the submission of its tax returns, LuxCo was informed5 by the LTA that it intended to deviate therefrom because it considered the portion of the variable yield (i.e. 99% of the net income) that exceeds the refinancing amount (i.e. 85%) to be a hidden dividend subject to the 15% withholding tax.

The LTA nevertheless issued the tax assessments as per its initial position. It dismissed the taxpayer's Transfer Pricing Report because (a) a PPL is profit linked, and hence not comparable with a fixed interest loan; and (b) interest had to be appreciated annually given the principle of the annual levy of taxes.

LuxCo filed a complaint with the head of the LTA6, referring to the binding effect of the ATC and to the previously shared Transfer Pricing Report that justified the yield under the PPL. In particular, the Transfer Pricing Report concluded that the arm's length interest rate on a fixed interest bearing loan would be included in the following range:

The fixed interest that would have accrued on the PPL by 31 December 2017 – which corresponds to the end of the investment period – at the median rate of 8.47% would have resulted in a yield of EUR 48,653,234, which is significantly higher than the yield that accrued within the same period on the PPL. Alternatively, the accrued yield on the PPL until 31 December 2015 (the year in which the dividend was received) corresponds to an effective rate of 9.81%, which exceeds the 3rd quartile but is still lower than the maximum rate.

The head of the LTA accepted that the PPL can be compared with a fixed interest loan, but argued that the 9.81% rate and the period ending 31 December 2015 were not argued in the initial reply and should thus be disregarded. In addition, the head of the LTA recalled that even where the lender is also the sole shareholder, it must still act on arm's length terms with its borrower/subsidiary. In the case at hand, the intention behind setting up the PPL with a high interest rate was to repatriate profits to the lender/shareholder as withholding tax-free interest expenses, and it was clear from the circumstances of the case that the form of the loan was chosen only for tax reasons. By contrast, an even moderately diligent and conscientious shareholder seeking to ensure the profitability of the invested capital would never invest funds in a company if he knew in advance that he would not receive any dividends. However, almost all of LuxCo's profits are absorbed by interest charges. Hence, the pricing of the PPL could not comply with the arm's length principle absent any proportional remuneration of the equity that financed the Participation. Here, the head of the LTA concluded that the arm's length principle was not satisfied and the ATC was thus not applicable.

LuxCo then deferred the case to the Tribunal. Besides its initial arguments, LuxCo stressed that the ATC was binding on the LTA, as all conditions for its validity had been satisfied. The decision of the head of the LTA to deny its application therefore violated the principles of legitimate expectations, good faith and legal certainty. Regarding the arm's length interest rate and the determination thereof in the range, LuxCo recalled that under the OECD TP Guidelines, if the range comprises results of relatively equal and high reliability, it could be argued that any point in the range satisfies the arm's length principle7. Therefore, it could be concluded that any point within the range represents an arm's length interest rate for the Loan. Regarding the LTA's argument that the pricing of the PPL could not comply with the arm's length principle absent any proportional remuneration of the equity, LuxCo pointed out that such reasoning can only be erroneous: if LuxCo had chosen to rely on a fixed interest loan instead of a PPL, this would have resulted in a significantly higher interest charge than under the PPL. Thus, not only would it not have been able to pay a dividend, but it would also have made a significant loss, which demonstrates its interest in relying on the PPL rather than on a fixed interest loan.

Decision of the Tribunal

The Tribunal confirmed LuxCo's arguments, in particular that:

The Tribunal implicitly dismissed the LTA's argument that the yield would not be arm's length in the absence of a proportional distribution to the shareholder, and decided that the LTA's decision had been taken in violation of the terms of the ATC. Hence, it declared the appeal justified and reversed the decision of the LTA so that no withholding tax applied.

The judgment is one of the few major transfer pricing decisions in Luxembourg case law, and has the merit to provide further legal certainty as to the application of the arm's length principle to PPLs. The outcome seems fully justified, as it confirms the use of OECD compliant methodologies and relies on the OECD Transfer Pricing Guidelines. However, the case also illustrates the increased scrutiny of the LTA regarding compliance with the arm's length principle, and the need to provide appropriate transfer pricing documentation on controlled transactions.

2. Since the publication of the OECD's transfer pricing guidelines for financial transactions (https://www.oecd.org/tax/beps/oecd-releases-transfer-pricing-guidance-on-financial-transactions.htm), the debt/equity ratio of a company must be justified on a case-by-case basis.

4. See Circular Letter of the head of the LTA n° 56/1 and 56bis/1 dated 27 December 2016 on companies pursuing intragroup financing activities.

5. Pursuant to the Luxembourg tax procedure, the LTA must inform the taxpayer in advance in case it intends to deviate in the tax assessment from the filed tax returns in order to allow the taxpayer to share his views. See § 205 AO.

6. Pursuant to the Luxembourg tax procedure, taxpayers who wish to contest their tax assessment must first lodge a complaint before the head of the LTA. See § 228 AO.