Uruguay: Free Trade Zones In Uruguay – What Are They Good For? - Part II - Case Studies

In our previous article we set out the basic framework under which Free Trade Zones (FTZs) work and their main advantages and some (smaller) disadvantages.

For this article we thought it would be useful to provide some further practical information about use of FTZs and also some specific examples of companies operating out of FTZs.

FTZ's are used for a broad range of business activities. The largest manufacturing industries in our country are installed in publically owned FTZ's, specifically created for them by the Uruguayan government.

The latest published statistics on FTZs is from 2015. During that year FTZs attracted 720 million US dollars of investment capital. Investment in FTZs has continued to rise even whilst investment in the rest of the Uruguayan economy has stagnated (although the economy has never been in a recession even in 2008/9).

The 2015 investment figure represented 5.86% of the total annual investment (national and foreign) in the Uruguayan economy.

The largest investment was the Montes del Plata cellulose plant near Colonia in the Punta Pereira FTZ.  To put the importance of this plant in perspective, it now contributes more than 2% to Uruguay's annual GDP. 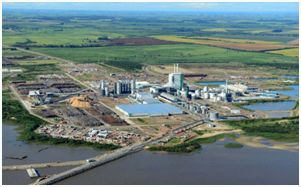 A new, additional, cellulose plant is now being negotiated between the owners of the Montes del Plata and the government. A fundamental requirement of the owners is that the government create a new FTZ for the plant's location in Uruguay's Rio Negro region.

So, the lesson is, if you are a Uruguayan company which exports services, you need to be located in a FTZ.

The 2015 information shows that in that year the total number of employees working in FTZs was 13,420 of whom 8.75% are non-Uruguayan nationals. Thus the 25% maximum limit set by the law for foreign nationals does not appear to be an issue in practice.

Average salaries for workers in FTZs are equal to 2,900 US dollars per month, which is well above the national average.

By far, the FTZ providing the greatest number of jobs is Zonamerica located on the outskirts of Montevideo, with its hundreds of tenant companies employing 6,900. 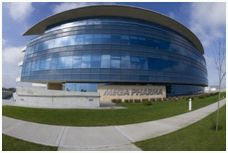 Photo: The entrance to the new Mega Pharma plant

The latest FTZ is called the Science Park ("Parque de las Ciencias") located near the Montevideo airport. It is aimed particularly at the biotech and pharmaceutical industry.

The Mega Pharma plant (part of the Roemmers group from Argentina) opened in March 2016 with an investment of 110 million US dollars. It is said to be the most modern plant in the whole of South America. It has 350 employees.

Although most of the plant is dedicated to the manufacture of medicines to be exported in the local region there is also a research and development facility.

Traditionally Roemmers has been a generic manufacturer, but it is to be hoped with this new plant they will be creating their own products. In 2017, it is estimated that production from the plant will exceed 250 million US dollars, with sales throughout Latin America.

Photos: The outside and inside of Costa Oriental's warehouse

Costa Oriental is the largest Uruguayan logistics company, which has now established itself in the Zonamerica FTZ to act as a regional hub for the distribution of goods for a variety of multinational companies.

Products brought into the FTZ do not pay any import duty and can be kept there for as long as is necessary.

Import duties are only paid when the goods are exported, at the rates applicable in the country to which the goods are sent. In the case of exports going on to another Mercosur country this means payment of the Common Eternal Tariff (A.E.C.) on entry.

Costa Oriental recently signed a distribution agreement with L'Oreal. In order to obtain this contract, Costa had to invest in special warehousing for pharmaceutical and cosmetic products, which conform to GMP (Good Manufacturing Practice) norms.

Costa has also been certified by the Uruguayan Customs Authority as a qualified operator, which means that its internal control systems have been fully checked and provides advantages for the company in its customs transactions. 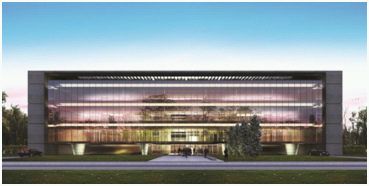 Trafigura describes itself as "one of the world's leading independent commodity trading and logistics houses". It is a multinational company with offices in 36 different countries. In 2013 it opened a regional hub in Zonamerica.

This new Uruguay office carries out all group activities, but with a focus on North and South America. So it has a commodity trading section and logistics activities, backed up with all the necessary back office staff.

The office has been so successful that additional teams are being moved to Uruguay. Likewise the company represents a very attractive opportunity to many young Uruguayan graduates. At the time of writing it employs over 400 people, having started with only 70 in 2013.

These examples are intended to give an idea of how some companies have successfully set up operations in Uruguay, with regional or even worldwide activities.

As mentioned in our previous article there are many other companies operating in the software, telecommunications (particularly call centres) and financial sectors.

If the Mercosur (a regional trade bloc of which Uruguay is a member) could actually get its act together and start really operating as at least a proper customs union, then these FTZs could increase in size substantially.

As many readers will be aware, over the last 10 years the Argentine economy has been virtually closed to imports and the Brazilian government has always been very protective of its own industries. Argentina seems to be on a gradual path towards opening its economy, which will lead to significant opportunities in Uruguay and the FTZs in particular – hopefully!