Antitrust practitioners, enforcers and industry professionals came together in Washington, D.C. for the 64th installment of the ABA Section of Antitrust Law's annual Spring Meeting. The Spring Meeting provides a look at the year that was and predictions for the year to come. Proskauer was again on the scene to provide the key learnings and takeaways for every antitrust advisor and business to add to their tool kit. 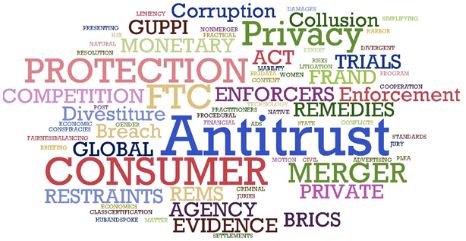 The 100 most frequently used words in the titles and descriptions of the 2016 Spring Meeting panels.

Apropos of the current climate of antitrust enforcement, during the first day of events the DOJ announced that it brought suit to block the merger between Halliburton and Baker Hughes. In her keynote speech shortly after the announcement, Attorney General Loretta Lynch challenged the merger, and commented that the DOJ stands ready to see cases through to trial, and will remain vigilant in protecting competition. The theme of the keynote speech was echoed by comments throughout the week from other DOJ colleagues and their Federal Trade Commission counterparts highlighting the agencies' willingness to challenge conduct and transactions viewed by the agencies as anticompetitive.

As the agencies are emboldened by recent successes, and with promises of continued aggressive enforcement, it is paramount that companies and antitrust advisors continue to develop strong antitrust compliance policies to address antitrust risk and avoid the pitfalls that make for common fodder at the Spring Meeting.

2015 was a record year for average length of merger investigations. Regulators defended the numbers, arguing that deal timing is primarily controlled by the transacting parties and that the transactions coming before the agencies are growing increasingly complex. The DOJ also cited the international elements of many transactions that require coordination of HSR filings to align with the schedule of international competition bureaus as further reason for longer-term investigations and completions. And with increased consolidation, an uptick in enforcement is to be expected.

Regulators have eschewed a one-size-fits-all approach to analyzing the growing flow of mergers. Regulators emphasized that they will not apply a static analysis to matters, and will look at markets anew with each transaction. The DOJ cited as examples recent analyses in mergers involving airlines and media conglomerates that resulted in what some observers perceived as inconsistent outcomes. Enforcers cautioned that fresh eyes are given to each market with each new deal, and dynamic change—whether in the form of reduction of national major airline carriers or the emergence of media content through broadband—informs the enforcers' approach.

DOJ officials also commented that the DOJ remains prepared to try cases in complicated markets involving complicated facts, noting its pursuit of criminal charges in the LIBOR and FOREX market, which required close collaboration between DOJ attorneys and economists. This comes on the heels of a year that saw $8.5 billion in criminal penalties levied worldwide and average jail times exceeding 24 months.

This year the DOJ broke new ground pursuing its first e-commerce criminal case, in which an executive pled guilty to charges lodged by the DOJ involving an agreement with another retailer to fix prices of wall décor using complex pricing algorithms. Enforcers are prepared to police conduct in all its forms as commerce increasingly shifts online.

Antitrust practitioners also have been speculating about the impact of the Yates Memorandum on the DOJ's approach to antitrust prosecution. One DOJ enforcer commented that because the majority of antitrust crimes are corporate crimes, the DOJ has internalized the guidance from the Yates Memorandum as part of its processes. Major changes are not expected, however, as the DOJ has long emphasized pursuing charges against individuals along with corporate prosecutions. Additionally, the DOJ is taking a closer look in civil conduct cases to determine whether there are instances where it is appropriate to name senior executives responsible for the conduct alongside defendant corporations.

For the FTC's part, commissioners trumpeted recent success at the Supreme Court in Actavis, North Carolina State Board of Dental Examiners, and Phoebe Putney Health Systems as indicative of effective enforcement policy. In addition, the FTC remains active as amici helping shape discourse through advocacy briefing in conduct cases, such as the FTC's amicus briefs regarding Risk Evaluation and Mitigation Strategies (REMS).

Moving forward, agencies described SEPs as a topic of great interest, especially as related to injunction enforcement. Although the DOJ has not brought a case alleging that an injunction is an antitrust violation, DOJ officials believe that there is potential for market power to be gained through injunction enforcement, and the DOJ will continue to scrutinize that space closely.

Antitrust advisors agree that the agencies' increased willingness to challenge mergers has changed the leverage calculus in negotiating divestiture remedies. Getting the right divestiture remedy for the deal and your client while satisfying agency concerns is a delicate balance that starts at the earliest stages of a deal. Companies must be ready from the outset of any potential merger to give serious thought to whether and what they are willing to divest to get a deal cleared.

Ultimately, because the agency's objective is to restore lost competition, the viability of the divestiture package and its ability to continue to act as a competitive constraint in the marketplace is the key hurdle for the agency to get over. Addressing potential divestitures in antitrust risk shifting provisions is a necessary part of ensuring the parties' respective deal objectives are met, but also can serve as a roadmap for the agency – so caution is counselled. Agency officials offered that it is their own analysis that carries the day and not what the parties have negotiated in the efforts clause, but concede that it is at least a factor in the calculus. For transactions that have global impact, managing the fix on a global basis requires a strategic and consolidated approach to avoid multiple divestitures beyond what is necessary to restore competition.

Agencies particularly favor divestiture as an acceptable remedy where the parties have an overlapping asset, and that asset is a stand-alone business that can be sold off easily. The agencies also want to be satisfied that the divestiture will be effective down the road, and that the divested entity will be viable moving forward. Thus, in crafting a divestiture, enforcers also will consider whether or not the merging parties have identified an up-front buyer for the divested entity, as up-front buyers can help build confidence that an entity will continue to exist in the market.

At the same time, the FTC acknowledges that merger remedies have not always been perfect. Enforcers described some of the notable unsuccessful divestitures of recent years that resulted in bankrupt divestiture buyers as not indicative of a systemic or process failure. To that end, however, the FTC is now undertaking a divestiture study which may shed more light on the issue and may be published in 2016.

Many of this year's panelists commented on the role that uncertainty in Washington may have on antitrust enforcement and litigation. Not only is there a vacancy on the high Court that must be filled, but the FTC has only three FTC commissioners, following the departures of Commissioners Joshua Wright and Julie Brill. One FTC commissioner emphasized that the FTC's enforcement mission remains unchanged by the vacancies. Still, the lack of a full complement of commissioners has tangible implications. The FTC can still vote on enforcement measures, but the applicability of the Sunshine Act complicates the deliberative process for a short-staffed FTC. Because votes of two of the three commissioners are sufficient to carry out official agency business, any conversation between any two commissioners would be considered a "meeting" under the Sunshine Act and trigger the Act's open meeting requirements. Additionally, an FTC commissioner lamented that the loss of two commissioners adversely affects the FTC's public discourse, as there are fewer voices speaking for the FTC.

In addition to the vacancies at the FTC, panelists also remarked about the effect of the SCOTUS vacancy left by the passing of Justice Scalia. Though Justice Scalia was an infrequent author of antitrust opinions, panelists commented that until his vacancy is filled, the Court is unlikely to rule on antitrust cases given the Court's current makeup and its hesitancy to review complex cases absent a clear majority.

Panelists also commented on the impact of a new face in the Oval Office in 2017. Panelists expressed differing views on the impact of a new administration on antitrust enforcement, and one panelist commented that a two-term president could appoint as much as 50 percent of the federal bench over an eight-year period, the effects of which would cascade into antitrust jurisprudence.

Unlike many other countries with advanced competition regimes, the United States antitrust enforcement agencies retain jurisdiction to investigate any transaction under the Clayton Act, before or after closing, without regard to size or reportability. This somewhat uncommon approach to merger control makes it important for companies of all sizes to take stock of the special risks present for smaller U.S.-facing transactions. Though investigations sometimes are initiated prior to closing, they can arise at any time before or after closing. Investigations of consummated transactions have been opened as long as one to two years post-closing, and have often caught companies off-guard. Thinking about and preparing for the risk of post-closing investigations is sound advice.

Assessing, managing, and allocating antitrust risk in non HSR-reportable transactions is paramount and should include evaluating in advance not only potential customer reactions, but also industry concentration levels and trends, agency interests with respect to particular industries (i.e., health care and pharmaceuticals), and potential mitigating factors. Though there  are several strategies to manage investigations and timelines effectively in the face of looming closing obligations, one FTC lawyer said it would be an "act of war" to close a transaction during the pendency of an investigation – even without the procedural HSR restrictions at play. Given the agency's renewed interest in using disgorgement of profits as a remedy in appropriate cases, companies are wise to take heed of these risks.