One of the key features of the Biden administration's immigration policy in its first year was to reverse many of the Trump administration's efforts to severely restrict the issuances of employment-based non-immigrant visas, especially the H-1B visa. The Trump administration made policy changes and issued interim final rules (IFRs) that would have it made more costly for employers to offer jobs to foreign nationals. For example, it eliminated the practice of prior deference for adjudication of H-1B extension petitions.1 Cumulatively, the Trump Administration's policy changes had the effect of leading to a sharp uptick in the outright denial rate for initial H-1B petitions that the Biden administration has dramatically reversed (4% in 2021; compared to 13% in 2020; and 21% in 2019).2

Another result of the Trump Administration's change in policy guidance was a dramatic increase in the backlog of cases at USCIS due to the spike in the rate of Request for Evidence (RFE) issuances.3 A look at the graph below shows that the Trump administration's policies had also the effect of increasing the RFE rate to 60.1% in the first quarter of 2019. 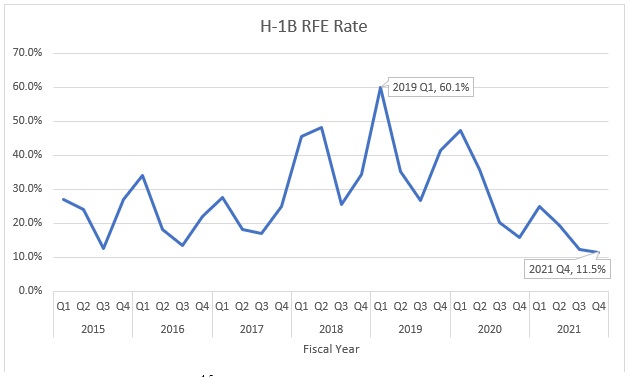 After assuming office, the Biden administration rescinded the policy memorandum and reinstated the policy of prior deference in April 2021.6

As a result of this reinstatement by the Biden Administration, the percentage of H-1Bs receiving RFEs has dropped significantly from a high of 60.1% in Q1 2019 to 11.5% in Q4 2021. Indeed, the Q4 2021 rate is the lowest that the RFE rate has been since FY 2015 when breaking the data down by quarter.

While many hope that RFE rates will remain at this historic low, there are reasons to think that they will in fact increase. The Biden administration is currently developing a new regulation – which has not been issued or appeared in the Federal Register as of this writing - titled "Modernizing H-1B Requirements and Oversight and Providing Flexibility in the F-1 Program." The Administration has said that it will be issued as a proposed regulation and subject to a public comment period. The specifics of the proposed regulation are unknown at this point, but the Office of Information and Regulatory Affairs (OIRA) states that among other things, this rule will "revise the regulations relating to 'employer-employee relationship.'"7 This is similar to the language of the Trump administration's own H-1B interim final rule (IFR) that was issued in October 2020 (and later vacated by courts for because the process by which it was issued was found flawed as opposed to ruling on the substance of the IFR itself ).8 Still, we anticipate the specifics of the proposed regulation will differ in material ways from the Trump IFR that was struck by the court.

If the Biden administration's revision to the definition of "employer-employee relationship" follows similar lines, or even if it is not as drastic as the previous Administration's IFR, the result might be an uptick in the number of RFE issuances for H-1B petitions.9 (Again, we must stress that we do not know what is in the proposed IFM). While it is unlikely that RFE rates will return to anything near Trump-era levels, the Biden administration's intent to issue new rules for H-1Bs that revise the "employer-employee relationship" – and advance a new prevailing wage regulation as well - allows for possibility of increased scrutiny of H-1B petitions beginning later this year. Therefore, practitioners should prepare for the historic low H-1B RFE rate to increase if the Biden administration's new regulations turn out to be similar to those advanced by the previous Administration.

The Biden Administration has not specified when the proposed regulation will be issued. The speculation is that it could come in the next several months with the goal of having a final regulation in place by the end of 2022.

7 Office of Management and Budget, Office of Information and Regulatory Affairs: https://www.reginfo.gov/public/do/eAgendaViewRule?pubId=202110&RIN=1615-AC70