United States: Rehearing Revisited: Do Some Judges CFR More Often Than Others?

In a recent post, we took a look at data on rehearing petitions—specifically, the timing of calls for responses (CFRs).  Today, we dig further into that data to see if we can identify judges whose panels CFR more often.

The Court doesn't publicize who issues CFRs.  But we can guess.  As we explained in our previous post, the Court's internal operating procedures suggest early CFRs—within 10 business days of the petition—typically come from someone on the original merits panel.

With that in mind, we looked at how often each judge appeared on a merits panel with an early CFR, which we're defining as within 14 calendar days (to approximate 10 business days) of the filing of a petition for panel and/or en banc rehearing from November 2019 to March 2021.  Here's what we saw: 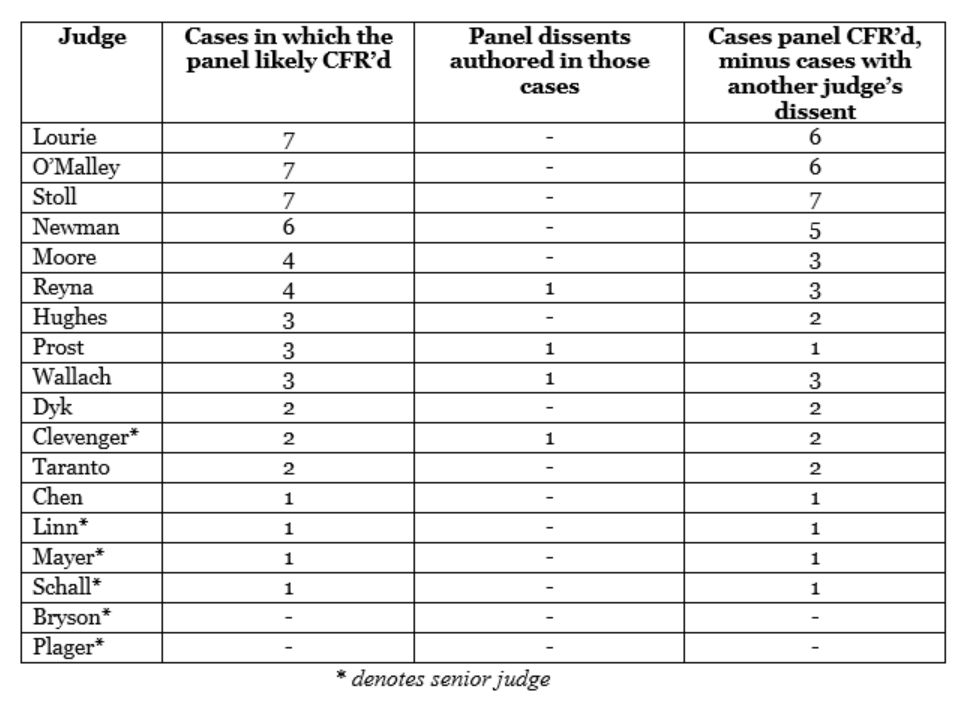 The second column shows how many times each judge was on a panel that issued a CFR (under our assumptions).  The third column shows how many of those cases the judge was a dissenter—which we assume makes it more likely that judge was interested in rehearing and thus responsible for the CFR.  And the last column takes the second column and subtracts cases in which someone else dissented—on the theory that the dissenting judge likely issued the CFR.  That last column is thus a rough guess for the cases in which each judge potentially issued the CFR—the obvious caveat being that it still could have been one of the other judges on that panel (or we could be wrong that the CFR came from the panel at all).

Interestingly, several judges crop up in these cases more often than others.  Could that mean Judges Lourie, O'Malley, Stoll, and Newman are more likely to CFR close or interesting cases when they sit on the panel?

Maybe, but we'll have to take this with a big grain of salt (or several).  For one, even with almost 18 months' data, our sample is small.  And we're not controlling for who else was on a panel with a given judge.  Take Judges Lourie, O'Malley, and Stoll—they were all on 7 panels with early CFRs.  But if those data points were all from the same 7 cases where the panel was Judges Lourie, O'Malley, and Stoll, that may mean most of those CFRs came from just one of those three.  All of which just confirms, again, that we don't actually know who on the panel issued these CFRs—or even whether the CFR definitely came from someone on the panel.  So it's possible that even a judge who appears on this list 7 times actually issued 0 CFRs.  We also don't know what idiosyncratic features might have driven the CFRs in these cases.  Just because a judge CFRs in several cases one year doesn't mean the same will be true the next.  Also, as we explored recently, members of the Court hear different numbers of cases (which presumably accounts for why senior judges were at the bottom of the table, for example).  Still, we'll keep building our data and monitoring to see whether these early trends continue.