United States: What Are Justice Theis' Question Patterns When She Disagrees With The Majority In Civil Cases?

This week, we're reviewing Justice Theis' history in oral arguments in civil cases. Having established that the party which gets more questions at argument overall is likely to lose, we're trying to determine (1) whether each individual Justice follows that same pattern when she or he agrees with the majority; and (2) when he or she dissents, does the Justice more heavily question the side the Justice thinks should lose, or the side the majority believes should lose? This week, we're looking at the data for Justice Theis, civil cases first. 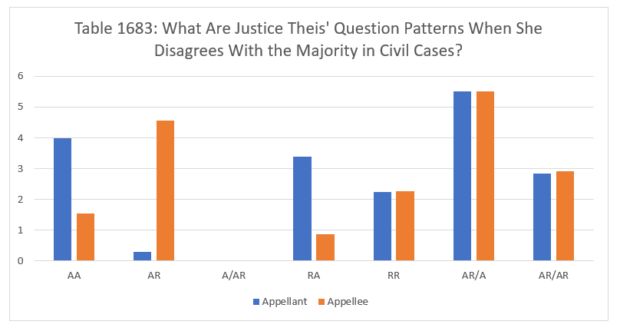 Join us back here next time as we turn our attention to Justice Theis' data in criminal cases.

Image courtesy of Flickr by Rick Obst (no changes).