by John M. Simpson
Duane Morris LLP
Your LinkedIn Connections
with the authors

As we have written before ( here and here), the animal rights group, People for the Ethical Treatment of Animals (PETA), operates a facility in Norfolk, Virginia that it calls an animal "shelter." Every public and private animal shelter in the Commonwealth of Virginia is required, annually, to submit a report to the Virginia Department of Agriculture and Consumer Services (VDACS) that details the number of animals that the shelter took in during the year and what happened to them. PETA's most recent report (for 2019) revealed that PETA euthanized dogs and cats at rates that far exceeded the average rates for all private animal shelters in Virginia. The PETA euthanasia rate for dogs was more than thirteen times the average rate for private shelters, and PETA's euthanasia rate for cats was more than eleven times the average rate for private shelters.

PETA has attempted to defend its death rate on the ground that, unlike other shelters in Virginia, PETA takes in the hard cases that other shelters turn down. A recent blog post attempted to explain why PETA kills animals at the rate that it does. According to PETA, "[u]nlike selective admission shelters (often misleadingly referred to as 'no-kill' shelters) ... PETA operates what could be called a 'shelter of last resort' – a safe place where no animal is turned away, ever." PETA also asserted that the "no-kill" shelters "reject unadoptable animals in order to keep their euthanasia statistics appealing (a gimmick you'll never catch PETA using)."

If, as PETA stated in its 2019 VDACS filing, it is an "open admission" shelter, that might explain the high death rate. An open admission shelter logically would have to dispose of more animals than a shelter that only takes in animals that can be adopted out. The problem with this, however, is that the numbers do not bear out PETA's claim. The 2019 VDACS reports show that, excluding PETA, at least forty-three (43) shelters in Virginia represented on their intake polices that are filed with VDACS that they are "open admission" like PETA claims it is or otherwise have no stated intake restrictions on the condition or temperment of the animal. These shelters likewise will take any animal, but these shelters, as a group, euthanized far fewer animals on average than PETA.

The graph below is based on the data reported on 2019 VDACS filings by the forty-three (43) shelters in Virginia that, according to their intake policies (on file with VDACS), have no intake restrictions on animal condition or are expressly "open admission." The graph plots euthanized animals as a percentage of the total that were in the agencies' custody for three categories – all animals, dogs and cats. The no-restriction shelters are shown in green and PETA in red. 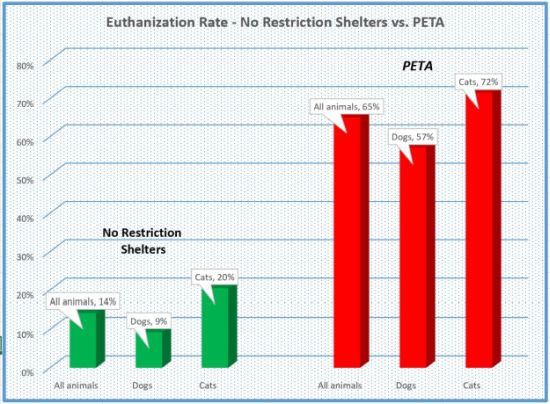 Even if the comparison is strictly limited to only those shelters that expressly describe themselves as "open admission," the results are still startling. The graph below, also drawn from 2019 VDACS reports, compares the average "open admission" shelter euthanasia rate with PETA's. 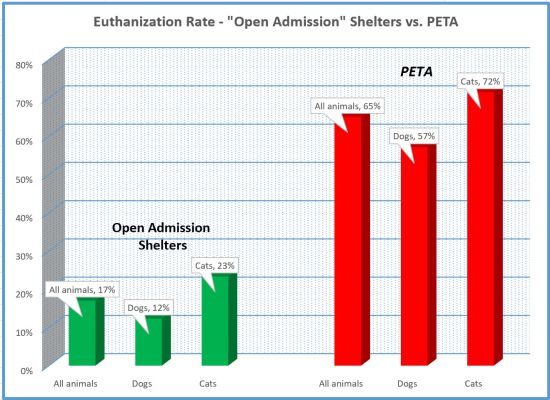 What this data indicates is that the handful of heart-rending visual examples of diseased animals that PETA uses to defend its euthanasia rate are not representative of the average dog or cat that PETA puts down. It is unlikely that an outsized portion of the hopeless cases in Virginia just happen to end up with PETA and that PETA just happens to have a euthanasia rate that vastly excceeds the average "open admission" shelter euthanasia rate in Virginia. Nor is it the case that persons in the Norfolk area with animals no other shelter will take only have PETA to turn to. To the contrary, four (4) of the "open admission" or no-restriction shelters are all within twenty (20) miles of PETA's facility.

Unlike virtually any other "open admission" facility in Virginia, dogs and cats go into PETA's "shelter," but most of them don't come out alive.

Disclaimer: This Alert has been prepared and published for informational purposes only and is not offered, nor should be construed, as legal advice. For more information, please see the firm's full disclaimer.