[This is a guest post by Natali De Corso, a rising 2-L at Boston College Law School, and a summer associate at Wolf, Greenfield & Sacks, P.C.]. The Board affirmed a Section 2(d) refusal of the mark CODE, finding a likelihood of confusion with the registered mark CODE2040, both for education services in the field of technology, business and entrepreneurship. The Board declined to address the Examining Attorney's 2(e)(1) refusal of the applied-for mark. In re Vox Media, Inc., Serial No. 87099703 (July 18, 2018) [not precedential] (Opinion by Judge Frances Wolfson). 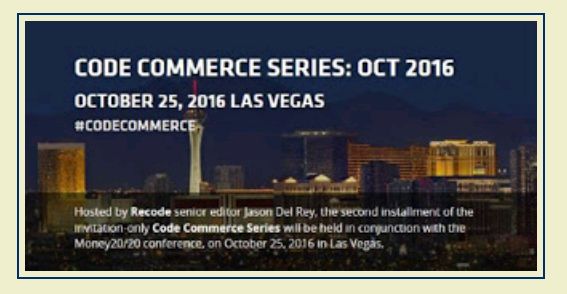 The Services, Trade Channels, and Consumers:

The Board concluded that the involved services were legally identical in part because each party "provide[d] education in various formats in the fields of technology, business and entrepreneurship." Applicant Vox argued that services were not in the same market because Registrant provides "internships/apprenticeships and workshops primarily relating to job placement and careers," while Applicant provides "conferences relating to media and technology." The Board, however, responded that an applicant "may not restrict the scope of the services covered in the cited registration by argument or extrinsic evidence." Rather, the Board must focus on the services as identified in the application and recited in the registration.

The Marks: The Board pointed out once again that, because the services are in-part identical, "the degree of similarity between the marks necessary to find likelihood of confusion need not be as great as where there is recognizable disparity between the services." The Board found the term "code" to be the dominant feature of Registrant's mark and, as the first portion of the mark, more likely than "2040" to be remembered by a consumer. "2040" primarily serves the purpose of identifying a particular date referred to on Registrant's website as "the start of the decade when the US will be majority people of color."

Next, the Board found it notable that the term "CODE" comprised the entirety of Applicant's mark. This was significant because "the likelihood of confusion has frequently been found where one mark incorporates the entirety of another mark."

Lastly, because Registrant's mark included a date (2040) and Applicant's specimen of use displayed dates in connection with its mark (e.g., CODE COMMERCE SERIES: OCT 2016), "consumers, upon encountering Applicant's mark CODE, are likely to recollect Registrant's CODE2040 mark and mistakenly believe Applicant's and Registrant's educational services emanate from a single source." The Board concluded that the first du Pont factor favored a finding of likelihood of confusion.

Sophistication of Purchasers: The Board also rejected Applicant's argument that the relevant consumers are "sophisticated and knowledgeable." Applicant failed to provide evidence of such sophistication or knowledge. Furthermore, the Board explained, it must base its decision "on the least sophisticated potential purchasers" at issue, and consumers for education services may include first-time students with no special knowledge or heightened care. The Board concluded that this was a neutral du Pont factor.

Actual Confusion: The Board explained that any lack of evidence of actual confusion between Applicant and Registrant's marks (which had both been in use for over four years) "carrie[d] little weight in an ex parte context." Additionally, the Board was mindful that the test under Section 2(d) is not actual confusion, but rather likelihood of confusion. The Board concluded that this was a neutral du Pont factor as well.

Balancing the relevant du Pont factors, the Board found confusion likely, and it affirmed the Section 2(d) refusal, finding it unnecessary to address the refusal to register the mark under Section 2(e)(1).

TTABlog comment: I wonder why the Board did not address the 2(e)(1) refusal, for the sake of completeness in case of appeal.