The U.S. Department of Agriculture (USDA) recently announced the deregulation of the Arctic® Apple, which is the first genetically modified apple to be approved for production, marketing, and sale in the United States.  It also marks just the second time a genetically modified fruit crop has been deregulated by the USDA, with the first being the virus-resistant Hawaiian papaya ('Rainbow' and 'SunUp'), which was deregulated by the USDA in 1997.  Compared to the transgenic papaya, the Arctic® Apple has the potential to have a much larger consumer base and wider geographic market.  Therefore, as expected, the Arctic® Apple's deregulation milestone has prompted immediate and sometimes strong reactions from both advocates and critics of genetically modified organisms (GMOs).  Even before rendering its decision, the USDA received thousands of public comments on the pros and cons of deregulating the Arctic® Apple.

Regulatory Clearance:  In February 2012, Okanagan Specialty Fruits Inc. (OSF) of British Columbia, Canada, filed a 163-page petition with the USDA's Animal and Plant Health Inspection Service (APHIS) seeking nonregulated status of its Arctic® Apple, a genetically altered variety of the cultivated apple, Malus x domestica.  The petition noted that OSF was developing Arctic® Apple cultivars that could serve as replacements for several well-known cultivars, particularly where the nonbrowning trait of the Arctic® Apple would provide added value and advantages.  According to OSF's press release reporting the USDA's approval of the Arctic® Apple, OSF noted that this milestone took nearly two decades from inception to USDA approval.

By deregulating the Arctic® Apples, USDA-APHIS concluded that the transgenic apples were unlikely to pose a plant pest risk to agriculture and other plants in the United States, and not likely to have a significant impact on the human environment.  The particular varieties covered by the deregulation decision will be marketed as the Arctic® Granny and the Arctic® Golden, which refer to their Granny Smith and Golden Delicious non-transgenic counterparts, respectively.  The USDA-APHIS announcement also noted that OSF was currently involved in a voluntary food safety assessment of its Arctic® Apples in consultation with the U.S. Food and Drug Administration (FDA).  However, United States regulatory law does not require FDA approval to sell the Arctic® Apples.

Another regulatory issue that could come into play and become a focus of intense debate is whether or not the Arctic® Apple will require any particular labeling to identify it as a genetically modified fruit.  But as it currently stands, the USDA's approval was the last hurdle to clear in order to make the Arctic® Apple ready for production and sale in the United States.

Engineering the Nonbrowning Trait into the Arctic® Apple:  A Brief Introduction:  The basic mechanism involved in providing the Arctic® Apple its nonbrowning trait is a process referred to as RNA interference (RNAi), which is a method occurring in nature for controlling gene expression in a wide variety of organisms, including plants such as apples.  Enzymatic browning of apples occurs when the phenolic compounds in the fruit react with oxygen, which is commonly referred to as oxidation.  This browning is often seen after slicing or biting into an apple and allowing it to be left exposed to the air for a time.  The oxidation process in apples is driven by an enzyme known as polyphenol oxidase (PPO).  The Arctic® Apple has been genetically modified by inserting a PPO suppression gene sequence into the DNA of the Arctic® Apple.

More specifically, as described in OSF's USDA deregulation petition (see page 3), the  Arctic® Apple was developed using an Agrobacterium-based plant transformation system that included a transformation vector containing a chimeric PPO suppression transgene.  This transgene consisted of partial coding sequences of the following PPO genes found in apples:  PPO2, GPO3, APO5, and pSR7.  The transgene included these four PPO genes in their sense orientation under the control of the cauliflower mosaic virus (CAMV35s) promoter and the nopaline synthase (NOS) terminator.  All of the transgene sequences were derived from an untransformed apple, with the transgene being constructed to simultaneously reduce expression of the four inserted PPO genes, thereby inducing a nonbrowning phenotype in the apple's fruit.  This sense suppression or co-suppression was used to induce the RNAi pathway and down regulate the PPO gene family in the transgenic apples.

Navigating the intellectual property thicket covering the various technologies required to test, develop, and produce a genetically modified plant or product can be complicated and daunting.  A careful investigation and legal analysis should be conducted of any patents covering the particular methods of transforming the plant at issue, as well as the necessary nucleotide and amino acid sequences that are to be inserted into or produced by the genetically modified plant.  To complicate the process, oftentimes the patents covering the necessary methods and sequences are owned by different organizations or patentees, whether they be private companies, governments, universities, or even individual inventors.  This can result in protracted and expensive licensing negotiations, as well as the need to engage biotech patent attorneys to conduct non-infringement and invalidity opinions on certain of the patents covering the associated technologies.

For a small biotech start-up like OSF was in the early days, in addition to getting clearance and licenses for patents owned by others, there is also the need to protect new innovations (e.g., the actual genetically modified plant) developed by the start-up itself.  This process can be expensive and drawn-out, but nevertheless essential, as another step toward commercialization of the new product.  Finally, for consumer fruit products such as apples, branding is important.  Therefore, a thoughtful and strategic approach should be taken to build up a trademark portfolio to cover the new product.

As outlined below, a brief history of OSF and its development of the Arctic® Apple seems to show that OSF was mindful of the importance of these various intellectual property rights from the very beginning.

Conception:  In an August 2012 article by Fast Company on Neal Carter, the founder of OSF, Carter explained how the concept of the Arctic® Apple was developed.  Carter, who had experience as a bioresource engineer and who had been involved with the agriculture sector for 30 years, was looking for technologies that could reduce harvest and post-harvest losses of fruits, as well as vegetables.  During the mid-1990s, Carter learned of a technology developed in Australia by the Commonwealth Scientific and Industrial Research Organisation (CSIRO) (Campbell, Australia), which used the PPO gene to inhibit enzymatic browning.  Carter quickly realized that the PPO gene could be used to stop, at least momentarily, the browning process from starting in fruits like apples.

Worldwide License of Patent Rights Covering the CSIRO Technology:  After founding OSF in 1996, Carter immediately sought a license from CSIRO of its enzymatic browning technology and has since reportedly received an exclusive worldwide license to use the technology in tree fruits.  On August 30, 2005, CSIRO was granted U.S. Patent No. 6,936,748, titled "Polyphenol Oxidase Genes from Potato Tuber, Grape, Apple and Broad Bean," which presumably is licensed to OSF.

Patents for OSF's New Technology:  In addition to securing a license for the foundational CSIRO PPO gene technology, OSF has pursued its own patents in at least Canada and the United States to cover the inventions relating more particularly to the Arctic® Apple and its associated technology.  For example, U.S. Patent No. 8,563,805, titled "Genetically Modified Reduced-Browning Fruit-Producing Plant and Produced Fruit Thereof, and Method of Obtaining Such," was issued to OSF on October 22, 2013.  The '805 patent is directed to a genetically modified apple plant having reduced browning potential relative to a wild type apple plant, methods of producing genetically modified apple plants, and nucleic acid constructs that include nucleotide sequences encoding for four different PPO isoenzymes.  OSF has also filed a U.S. continuation patent application based on the '805 patent, which published as U.S. Patent Application Publication No. 2014/0041079-A1 on February 6, 2014. 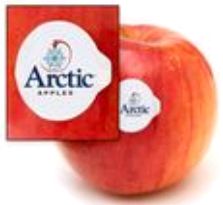 Use of Trademarks:  Branding and Labeling:  By consistently using the Arctic® trademark to identify its genetically modified apples, OSF has done a good job at branding the Arctic® Apple.  OSF has at least four different cultivars of genetically modified apples.  The two that have been approved so far by the USDA-APHIS are branded as Arctic® Granny and Arctic® Golden.  Two other cultivars that are still awaiting USDA deregulation are being branded as Arctic® Gala and Arctic® Fuji.  As indicated above, those familiar with apple varieties will recognize that Granny, Golden, Gala, and Fuji are names associated with apple varieties that are fairly popular in the global marketplace, and certainly in the United States.

For its part, OSF has stated that it is committed to transparency in terms of the GMO labeling debate.  On its website for the Arctic® Apple, OSF states that it believes the consumers have the right to decide if they are interested in purchasing and eating nonbrowning apples.  Thus, OSF asserts that a label clearly designating truly nonbrowning apples as "Arctic®" will make it easy for consumers to discern their choice.  According to OSF, the Arctic® trademark provides the adequate notice to the public of a GMO product, thereby eliminating the need for a "GMO" label.  Others in the GMO debate would certainly disagree with OSF's position.