Apple fans have been closely following details about the release of the Apple iWatch. While Apple has not confirmed any details about the wearable technology, in August 2011, Apple filed a patent before the United States Patent & Trademark Office claiming a flexible display, a touchscreen, and a wireless communications antenna. The patent also contains the following drawing: 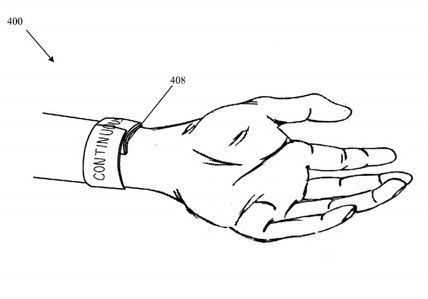 Further details of this rumoured smartwatch have not been released by Apple, but Apple has been busy filing trademark applications to protect the name. To date, Apple has filed applications to register the mark "IWATCH" in multiple countries, including Mexico, Argentina, Brazil, Columbia, Peru, Jamaica, India, Japan, Iceland, Switzerland and South Korea. Swatch, owner of the trademark "ISWATCH" is trying to stop the clock on these applications.

Swatch is the owner of a registration for "ISWATCH" in multiple countries for use in connection with watches, among other things. Swatch feels that registration of "IWATCH" by Apple for use in connection with watches would be too similar. As a result, Swatch has been opposing the registration of IWATCH and intends to continue to do so wherever Apple tries to register.  It remains to be seen how trademark offices around the world will lean on this issue. The Iceland Trademark Office has already refused registration of Apple's IWATCH trademark on the basis that it is "confusingly  similar" to Swatch's trademark.

Will Apple cease use of "IWATCH", enter into some sort of agreement with Swatch permitting it to use the mark, or will trademark offices decide that with all the "i" trademarks out there, the marks are not confusingly similar? Only time will tell.