The USPTO refused to register the mark ZTA for jewelry and clothing, finding confusion likely with the identical mark, registered for, inter alia, mugs, cups, bottles, drinkware, and tableware. The fact that the marks are identical weighed "heavily" in favor of affirmance of the refusal. But what about the goods? How do you think this came out? In re Zeta Tau Alpha Sorority, Serial No. 90090117 (August 29, 2022) [not precedential] (Opinion by Judge Linda A. Kuczma). 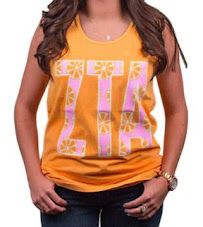 Of course, when the involved marks are identical, a lesser degree of similarity between the goods is necessary to support a Section 2(d) refusal. Moreover, the goods "do not have to be similar or competitive, or even offered through the same channels of trade, in order to find that there is a likelihood of confusion."

The Examining Attorney also submitted fifteen active, use-based third-party registrations for marks registered for use in connection with those same or similar goods.

The Board therefore found that the involved goods are related for Section 2(d) purposes.

While the goods offered under Applicant's and Registrant's identical marks are not identical or competitive, as noted, the record demonstrates more than enough of a relationship between them that they would be likely to be seen by the same consumers under circumstances that would lead them to believe that they originate from the same source.

Applicant argued that ZTA is an "affinity mark" like those commonly licensed by sororities, fraternities, and colleges "to multiple manufacturers to sponsor or endorse the production of official merchandise for members, alumni, supporters and so forth to acquire for the purpose of displaying the member, alumnus, or supporter's 'affinity' for their respective fraternity, sorority, college or university." The Board agreed that "The licensing of commercial trademarks for use on "collateral" products, such as Applicant's goods, which are unrelated in nature to the services on which its mark is normally used has become a common practice." However, it was unimpressed by the applicant's argument.

And so, the Board affirmed the refusal.

TTABlogger comment: It appears that, by citing a number of "fashion labels," one can show most any consumer product to be related to clothing and jewelry.