Pro baller Terry Rozier (our defendant) began his career with the Boston Celtics and now plays for the Charlotte Hornets. Rozier's reputation around the NBA as a "dangerous scorer" and "fearless shooter" eventually earned him the nickname "Scary Terry." (For more on the origins of the nickname, see this Boston Globe article.) Rozier claims that he embraced this sobriquet so he could "engage with his fans and share personal aspects of himself, like his love for scary movies, and what they meant for his own story."

In 2018, Rozier launched a "Scarry Terry" line of merchandise that included tee shirts with a cartoon image of Rozier in uniform wearing a mask from the horror film Scream. Rozier chose this design because, as a kid, he loved Scream, and "its mix of violence and humor provided solace and escapism in a childhood surrounded by violence." This is the tee shirt: 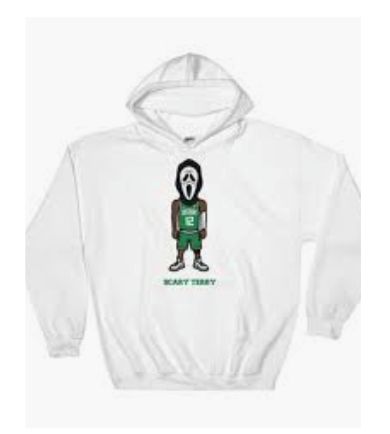 As Rozier's popularity surged, his merch efforts kept apace. This eventually caught the attention of plaintiff Fun World, a leading manufacturer of costumes and masks. Fun World purports to own all rights in the ghost face mask that was used (with Fun World's permission) in Scream and that became, in the words of Fun World's trademarked tagline, "The icon of Halloween." The ghost face mask for which Fun World holds a copyright registration (as a sculptural work) is this: 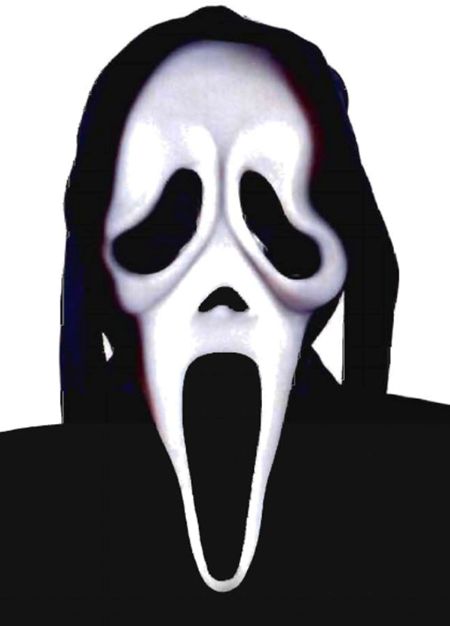 Fun World sued Rozier for copyright and trademark infringement. Last week, District Judge Kiyo A. Matsumoto in the Southern District of New York granted Rozier's motion for summary judgment. There are a lot of issues addressed in the court's 85-page decision. Here are some highlights.

1. Does Fun World Own a Valid Copyright in the Ghost Face Mask?

Not according to Rozier, who alleged that the mask was actually created by a third party, Tony Gardner (well-known makeup and special effects designer). In a declaration, Gardner contended that, as early as the spring of 1991, he was selling a ghost mask called the "Wailer," Gardner also testified that the "Wailer" was prominently displayed at trade shows attended by Fun World in the same year. The copyright registration for Fun World's ghost mask lists December 4, 1991 as the first publication date - i.e., several months after Gardner began marketing the "Wailer" mask. Below is a side by side of Gardner's "Wailer" and Fun World's ghost mask: 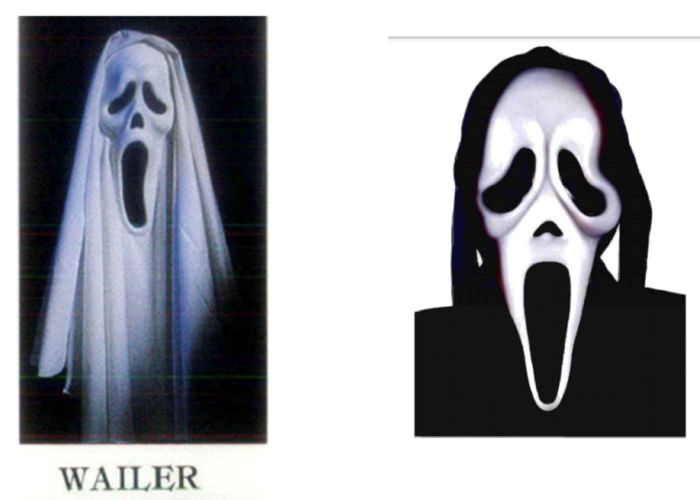 At the outset, the court noted that any claim Gardner might have asserted that he was the owner of the copyright in Fun World's ghost mask was time-barred, since he had been aware that Fun World was licensing the mask at least eighteen years ago, well outside the three-year statute of limitations period. (See this post for more on when copyright ownership claims accrue under § 507(b).) Rozier lacked standing to assert (and then take refuge in) Gardner's time-barred position as to rights he may once have had. Nevertheless, Garner's testimony was relevant to the question of whether Fun World's mask was original. Although Fun World's registration gave rise to a presumption of validity (and originality), and although the threshold for originality is low, the court concluded that a genuine issue of material fact existed as to whether Fun World's mask possesses the requisite originality for copyright protection. The evidence proffered by Rozier "could lead a jury to conclude that [Fun World] or its representatives may have had direct access to and knowledge of Mr. Gardner's ... mask in 1991 through national expositions, and a comparison of the two works demonstrates what the Court considers to be a visible and substantial similarity."

Assuming arguendo that Fun World owns a valid copyright in its ghost mask, the court next considered whether the cartoon mask as it appears on Rozier's tee shirts infringed upon Fun World's copyright. To prove infringement, Fun World was required to demonstrate that: (1) Rozier has actually copied Fun World's mask; and (2) the copying was illegal because a substantial similarity exists between protectible elements of Fun World's mask and the mask depicted on the tee shirts.

Here, it was undisputed that Rozier had access to and copied the mask from Scream; indeed, Rozier admitted that he had instructed his team to "do a cartoon showing [him] with a mask that looked like the one from the Scream movies." And although substantial similarity is often a question reserved for the jury, the court found that in this case "reasonable jurors would not differ in their understanding that Mr. Rozier's cartoon depiction of the mask was appropriated from the Scream mask, which had originated from" Fun World's mask. Accordingly, the court concluded that the cartoon mask as it appears on Rozier's tee shirts was substantially similar, as a matter of law, to Fun World's mask.

3. Did Rozier's Use of the Scream Mask Qualify as Fair Use?

All was not lost for Rozier: the court determined that his use of the mask on tee shirts was protected under fair use. Here is a rundown of the court's analysis of the statutory factors. 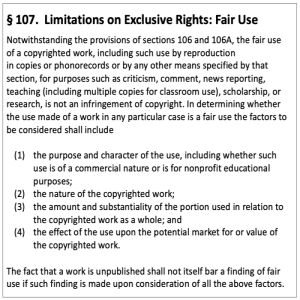 Nature and Purpose of Use.

First, Rozier argued that his cartoon was a transformative parody. In Campbell v. Acuff Rose, the Supreme Court held that, to qualify as a parody, the secondary work must "at least in part," comment on the primary work, Here, the analysis was "complicated by the fact that ... [Rozier] did not seek to parody the underlying source material - [Fun World's] Ghost Face Mask - but rather, the Ghost Face Mask specifically licensed and used in the Scream films by a serial killer character." The court characterized this as a "secondary use of a secondary use." Breaking this down, what the court meant is:

Even though Rozier's use of the mask "is more attenuated from what is traditionally considered the "original" work," and even though Rozier did not comment directly on the original mask or on Fun World, the court found that Rozier's use was nonetheless parodic in nature because he:

"[S]uccessfully uses a cartoon rendering of the Plaintiff's licensed Scream mask on a cartoon basketball player to lampoon the famous mask-wearing movie villain and killer in the context of NBA players, NBA fans, and even the NBA media. Defendant's humorous and whimsical reimagination of the Ghost Face Mask does, "at least in part," comment on Plaintiff or its work (as used in Scream), as required for protection as parody under copyright law, favoring a finding of fair use and summary judgment for Defendant."

Second, the court found that Rozier's use of the ghost mask also qualified for fair use as a satire. In Blanch v. Koons (see this post), the Second Circuit found that artist Jeff Koons' inclusion of a fashion photograph in a new work qualified for fair use even though Koon's new work did not comment directly on the specific photograph he had appropriated (and therefore didn't qualify as a parody) but instead commented on fashion photography and advertising more broadly. In that case, the Second Circuit noted that Koons work "may be better characterized for these purposes as satire-its message appears to target the genre of which [the original photograph] is typical, rather than the individual photograph itself."

Here, the court found that Rozier had used the ghost mask to satirize or ridicule "the perception of ruthless, high-scoring athletes in the NBA, as well [as to underscore] the humor in the Scary Terry moniker." This, in the court's view, constituted "a genuine creative rationale for borrowing [Fun World's] image, rather than using it merely "to get attention or to avoid the drudgery in working up something fresh."

Third, the court agreed with Rozier that the use of the mask on tee shirts served another transformative purpose: it marked its wearers as fans of Mr. Rozier. The "merchandise serves the purpose of identifying and connecting Defendant's fans with Defendant's Scary Terry persona, a significantly different use and purpose from that of the original work."

Finally, the court found that the fact that Rozier's use was undeniably commercial in nature (which typically weighs against a finding of fair use) was not dispositive here, given the transformative nature of the use.

Accordingly, the first factor favored a finding of fair use.

The Nature of the Copyrighted Work. The second factor favored Fun World, since the mask was creative in nature.

The Amount and Substantiality of the Use. The court concluded that the third factor was neutral. On on hand, in quantitative terms, Rozier copied enough of the mask - in particular, the configuration and shape of the head and facial features - such that the cartoon was substantially similar to it as a matter of law. On the other hand, in order to invoke Scream, Rozier "necessarily copied a substantial portion of the Ghost Face Mask as used in Scream, albeit in two-dimensional, cartoon form, for the purposes of ensuring recognition."

The Effect of the Use on the Market for the Original. The fourth factor weighed in favor of a finding of fair use. The court was not persuaded that Rozier's merchandise (in the sports apparel category) would "usurp the primary market of holiday and party consumers for the Ghost Face Mask." Rozier identified a distinct and relevant market for his merchandise - i.e., his fans. Moreover, Rozier's tee shirts are not a "competing substitute" for Fun World's products, including because Rozier "added content that is both unrelated to prior associations with the Ghost Face Mask and specific to Defendant's use, specifically, Mr. Rozier, the Celtics, and professional basketball generally." Finally, even though it was undisputed that Fun World licensed images of the mask for use on apparel, the court did not believe that Rozier's tee shirts would have a significant impact on any of Fun World's potential markets:

"The Court has considered whether Mr. Rozier's widespread and transformative use of the Scream mask, if unchecked and widespread, would result in substantial adverse impact for Plaintiff's potential market. The Court concludes that this is precisely the kind of tension that exists between the enforcement of a copyright and the fair use doctrine, which 'seeks to strike a balance between an artist's intellectual property rights ... including the right to license and develop (or refrain from licensing or developing) ... and 'the ability of the rest of us to express them- or ourselves by reference to the works of others.' Though a slew of parodical, satirical, or other transformative uses of the Ghost Face Mask could certainly adversely impact Plaintiff's potential market, these hypothetical fair uses are not the type of contemplated use that would compel a finding in favor of the copyright holder." (Citations omitted.)

Finally, the court granted Rozier's motion for summary judgment on all of Fun World's trademark claims. With respect to Fun World's infringement claims, the court found, after reviewing and weighing the eight Polaroid factor, that all the factors either weighed in favor of Rozier or were neutral and "not a single factor weighs in favor of" Fun World. With respect to Fun World's dilution claim, the court held that Fun World had abandoned the claim for failing to respond to Rozier's motion, and that, in any event, Fun World had failed to submit any evidence to support that its mark was a famous mark that qualified for protection under federal law. 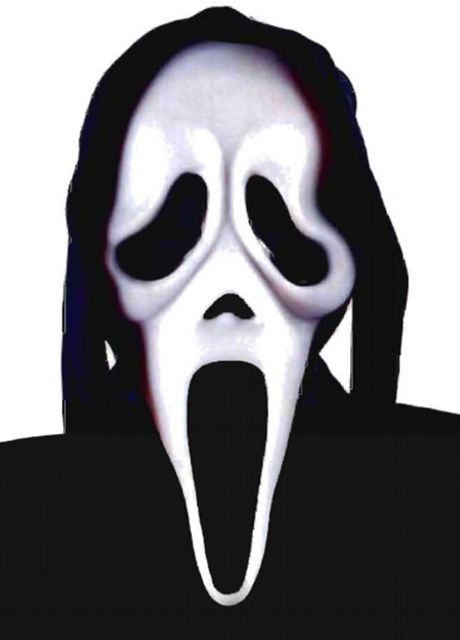