In this nearly-six-year-old opposition proceeding, the Board rejected the New York Mercantile Exchange's Section 2(d) claim, concluding that confusion is not likely between opposer's NYMEX mark and applicant's mark NAMX, both for various electronic financial services. "The conditions under which sales are made (i.e., the degree of purchaser care) and the dissimilarity of the marks" outweighed the other DuPont factors. New York Mercantile Exchange, Inc. v. North American Monetary Exchange Corporation, Opposition No. 91225279 (September 10, 2021) [not precedential] (Opinion by Judge Marc A. Bergsman).

The Services: The Board found applicant's "clearing and reconciling financial transactions" and "currency exchange services" to broad enough to encompass opposer's "providing . electronic exchange markets for trading, clearing, confirming transactions and other services in the field of commodity futures, options and other derivatives."

Because the services are in part legally identical, the Board presumed that those services travel in the same trade channels to the same classes of consumers.

Conditions of Sale: Opposer's NYMEX services are rendered to individuals and companies that trade precious and industrial metals and energy contracts, as well as those desiring to hedge risk, create security interests in metals, or invest in metals for the future. The Board concluded that "[t]he consumers who encounter both Opposer's mark and Applicant's mark are highly sophisticated, careful individuals who exercise a high degree of purchasing care." 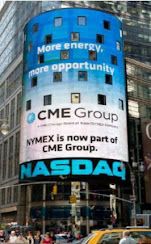 Strength of Opposer's NYMEX Mark: Opposer contended that NYMEX is a strong and famous mark, but its evidence fell short of the latter target.

Opposer's testimony and evidence regarding the use of its NYMEX mark prove that NYMEX is a commercially strong, but not famous mark. First, we note that Opposer did not introduce any evidence of unsolicited media discussing the renown of Opposer's NYMEX mark. Second, the representative samples of Opposer's advertising focus on the CME GROUP mark and CME GROUP logo, not the NYMEX mark. This throws doubt on LaPierre's testimony that Opposer spends a million dollars a year advertising the NYMEX service mark. Based on Opposer's testimonial and evidentiary showing, it appears that a million dollars a year is primarily spent advertising CME GROUP and the CME GROUP logo with a nod to NYMEX.

The Marks: "Opposer's consumers are sophisticated consumers who recognize the mark [NYMEX] as an abbreviation of New York Mercantile Exchange." Applicant's mark NAMX is "an arbitrary combination of letters with no apparent meaning based on the record before us as the letters do not correspond identically to the first letter in each of the words of the Applicant's name." The Board therefore concluded that the marks have different meanings and engender different commercial impressions.

Opposer argued that the marks look alike, but the Board disagreed. "Opposer's mark NYMEX engenders the commercial impression NY MEX or New York Mercantile Exchange in part because NY is a well-known abbreviation for New York. On the other hand, Applicant's mark NAMX is an arbitrarily arranged combination of letters with no apparent meaning." Furthermore, opposer's mark begins with "NY", which will catch the consumer's attention and will distinguish the marks.

The Board also disagreed with opposer's contention that the marks sound alike. The Board noted that there is no correct pronunciation of a mark that is not a common word.

Nevertheless, because consumers recognize the letters NY in Opposer's mark NYMEX as the well-known abbreviation for New York, to the extent it is pronounced, consumers will say "New York Mex" or "NY Mex." On the other hand, based on standard English pronunciation, it is likely that consumers will pronounce Applicant's mark, if they say it at all, as Nam X or Name X because they will turn Nam into something they recognize. However, it is just as likely that consumers will refer to NAMX by its letters (i.e., N-A-M-X).

The Board found the marks to be more dissimilar than similar.

Conclusion: The Board dismissed the opposition.

TTABlogger comment:I wonder what a survey regarding pronunciation would have yielded?