by Silvia Marchi
HFG Law & Intellectual Property
To print this article, all you need is to be registered or login on Mondaq.com.

The day after the interim decision of the court that restricted the sale of the shoes, Nike and MSCHF settled the case.

As part of the settlement (which is only partially disclosed), MSCHF agreed to buy back any Satan Shoes as well as Jesus Shoes for their original retail prices "in order to remove them from circulation".

Whether the shoes will be returned or not by the customers, it's then another matter. And indeed the Satan shoes already appeared on eBay for prices between $3,800 and $6,666.

You don't have idea of what we're talking about? Here is the story.

The art collective MSCHF designed, in collaboration with the rapper Lil Nas X, the "Satan Shoes", which went on sale Monday, March 29th.

Nike filed a lawsuit, claiming that the "Satan shoes", unofficial redesigns of Nike's trademark Air Max 97 sneaker, despite the various modifications made, are still well recognizable as Nike's product.

Art and fashion sometimes cross their ways. It's plenty of cases where designers take "inspiration"  from art (we already wrote about  street art and fashion), or where artists collaborate with famous brands.

It can happen that the fashion brand asks the artist to design a collection (the most commercially successful is probably the collaboration between Louis Vuitton and Takashi Murakami), or asks permission to use a piece of art; on the opposite, artists sometimes take famous brands and use them in their work of art, in the name of "freedom of expression" (see our article about the use of  brand in art).

In some cases, the inspiration and the utilization is legal and it doesn't require the consent of the other party. Sometimes, quite the opposite. This is what happened with Nike. 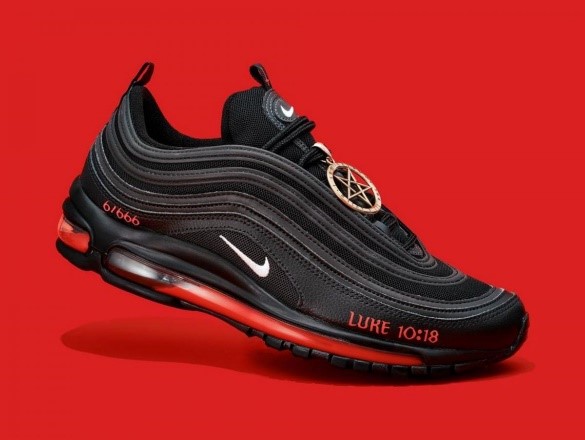 But what is exactly the "Satan shoe"?

It's a limited edition (666 pieces, which is definitely a significative number) of the Air Max 97, individually numbered, with a red liquid in the sole (supposedly containing one drop of human blood from MSCHF team), a pentagram pendant on the laces and, printed in red, a reference to a Bible verse, Luke 10:18 ("I saw Satan fall like lightning from heaven").

It asked the court to force MSCHF to cease manufacturing, distributing, selling or promoting any products under Nike's various trademarks, while it also wanted a court to order that MSCHF "deliver to Nike for destruction any and all shoes, apparel, digital files, packaging, printed graphics, promotional materials", and to award monetary damages for the financial harm the company has suffered. 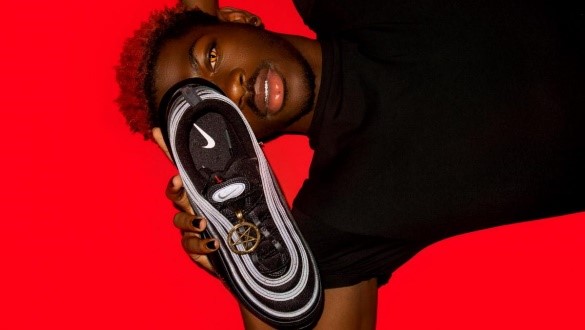 (Call Me By Your Name)", in which the 21-year-old rapper attempts to seduce a devil.

The rapper and the MSHF collective argued that the shoes are "individually-numbered works of art", that should not be confused with a Nike product, that no one will actually wear them but exhibit them instead, and invoked the freedom of expression.

On Wednesday, though, a U.S. District Court in New York approved Nike's request for a temporary restraining order against MSCHF.

The "transformation"  was not enough to consider the shoes a work of art. No more Satan shoes can be produced or sold, even though this restriction came useless because, according to MSCHF's lawyers, almost all the 666 pair were already sold and shipped and they have no plans to produce any more pairs of the shoe.

As mentioned before, the Satan Shoes are not the first provocative item created by the MSCHF with a Nike shoe. In 2019, the collective released one pair of "Jesus Shoes" created from the same Air Max model, without much controversy. 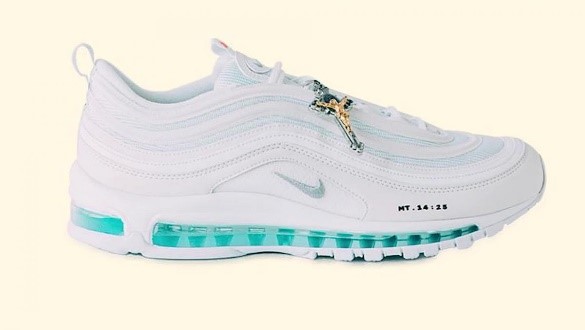 A plain pair of men's Air Max 97 costs about $160, but MSCHF completely revamped the shoe and added a golden Jesus on a crucifix as a shoelace charm.

Where the Satan shoe has human blood, the Jesus shoe had holy water (supposedly from the River Jordan, where Jesus was baptized) which was blessed by a priest in Brooklyn.

The reference to the Bible in this case was Mattew 14:25 ("And in the fourth watch of the night Jesus went unto them, walking on the sea").

Why Nike didn't say anything in the case of Jesus shoes, and filed a lawsuit for the Satan shoes? 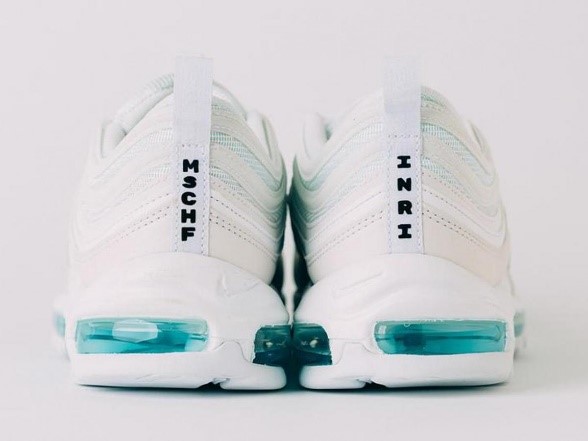 Well, the difference is basically in the damage that the brand can have from being associated with something bad, socially unacceptable or against the value of the brand itself: the release of the Satan shoe had many calling for boycotts of Nike, under the false idea that the apparel giant was behind the release of the sneakers.

Some sport stars like UFC legend Jon Jones and Clemson player Trevor Lawrence spoke against the brand before knowing that Nike is not involved in the production of the Satan shoes.

The judges had to examine whether the use of the mark has artistic relevance, and if so, whether the work is explicitly misleading. The response was that the black-and-red, devil-themed sneakers, which carry the Nike "swoosh" logo, infringed its trademarks.

According to the New York Times, in the settlement MSCHF declares that, with the Satan shoes, intended to comment on the absurdity of the collaboration culture practiced by some brands, and "having already achieved its artistic purpose, MSCHF recognized that settlement was the best way to allow it to put this lawsuit behind it".

On the other side, Nike confirmed the settlement with a statement of their own. "MSCHF altered these shoes without Nike's authorization", the brand said.

"As part of the settlement, Nike has asked MSCHF, and MSCHF has agreed, to initiate a voluntary recall to buy back any Satan Shoes and Jesus Shoes for their original retail prices, in order to remove them from circulation.

From now on, if you want walk on the water with the Jesus shoes or go to hell with the Satan shoes, you do it at your own risk.