If you have lived or worked in New York City, it is likely that you have at least once walked past the long line of customers often found snaking up the sidewalk to the original Halal Guys food cart located on 6th Avenue and 53rd Street. Perhaps you were even one of those customers waiting in line.

According to the complaint, three Egyptian immigrants founded The Halal Guys business in the 1990s when they converted their midtown Manhattan hot dog cart into a halal food cart in response to New Yorkers' growing demands for halal meals. In the following decades, the business has expanded from this sole food cart into an international franchise with over eighty-five locations in major American cities and foreign cities, such as Toronto, Manila, and London.

The business began operating under the name THE HALAL GUYS around November 2000, as stated in the complaint. The Halal Guys currently owns at least seven federal trademark registrations, including THE HALAL GUYS, THE HALAL GUYS GYRO & CHICKEN logo, and WE ARE DIFFERENT. 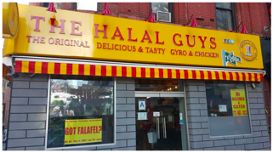 The Halal Guys also owns restaurant locations on Long Island and, as stated in the complaint, upon learning about The Halal Girls location, The Halal Guys contacted the Manzoor Partners and requested that they adopt a different name for their new restaurant. The complaint notes that Khalid Manzoor responded to these concerns and advised that the mark would be changed, but these initial changes allegedly were never made. Instead, The Halal Girls expanded into the online market and began offering its food on the same third-party delivery and take-out applications that are used by The Halal Guys.

Following an additional name change request, the Manzoors provided The Halal Guys with a photo of its restaurant's changed signage, which depicted the mark HALAL GIRLS above the phrase FRESH PLATTERS AND ACAI BOWLS. The Halal Guys claim that the Manzoor Partners then reached out to The Halal Guys and asked if it would be interested in purchasing The Halal Girls. 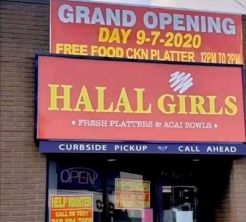 The Halal Guys filed the present suit in the Eastern District of New York on March 2, 2021. It has asserted various federal and state law claims, including federal trademark infringement and false designation of origin. Importantly, The Halal Guys noted that both THE HALAL GUYS and THE HALAL GUYS GYRO & CHICKEN logo are incontestable. As of today, The Halal Girls' website (halalgirls.com) is no longer active, and Google indicates that the restaurant is permanently closed. Given these developments, it is unknown how this litigation will proceed. It will be interesting to see how The Halal Girls will respond to this complaint.