The message is clear for pharmaceutical formulation patents. To establish a prima facie cases of obviousness, compounds having similar structure and function can be used as the basis for establishing similar properties. In addition, so called "obvious to try" cases of obviousness can be established even if the variable being manipulated (i.e., 'tried') is not the "first variable."

The '025 patent claims a methylnaltrexone pharmaceutical formulation that is stable when the pH of the solution is adjusted to between 3.0 and 3.5. Claim 8, depends from claim 1, which recites:

Claim 8 recites the pharmaceutical formulation of claim 1, wherein the preparation is stable to storage for 24 months at about room temperature.

Before the district court, Mylan argued that claim 8 would have been obvious in view of three references that when combined taught naloxone or naltrexone hydrochloride formulations, compounds similar, but not identical to methylnaltrexone, having stability between pH ranges of about 3 to 5. Mylan argued that a person of skill in the art would have been motivated to prepare and would have arrived at the preparation of claim 8 via routine optimization of pH based on at least the similarities of the structures as illustrated below. 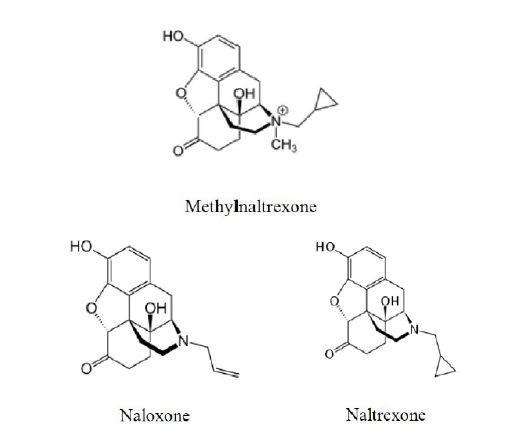 The district court disagreed stating that the references did not teach the formulation of claim 8 and that the long-term stability of methylnaltrexone in claim 8 was not a predictable result. The district court stated that because the references did not specifically teach methylnaltrexone formulations, that the overlapping ranges in pH were irrelevant because overlapping ranges could only establish a prima facie case of obviousness when the art teaches the specific compound that is claimed. The district court also stated that because none of the references listed pH as the "first variable" that a person of skill would manipulate, that it would not have been obvious to adjust the pH as a means to improve stability.

In its decision, the Federal Circuit agreed with Mylan. Based on case law, which "reflects an understanding that skilled artisans can expect structurally similar compounds to have similar properties," and on the record presented before the court, the Federal Circuit stated that the record supports a prima facie case of obviousness. The two compounds disclosed in the references, naloxone and naltrexone, share significant structural similarity with the compound of claim 8, methylnaltrexone.

The Federal Circuit also stated that the district court's obvious-to-try analysis is inconsistent with precedent, which has established that skilled artisans can expect structurally similar compounds to have similar properties, and agreed that there were factual disputes precluding summary judgement. Also, it does not matter if the variable "tried" is the "first" variable. However, the Federal Circuit also acknowledged that their holding should not be misconstrued to mean that Valeant's claim 8 is necessarily obvious stating that Valeant may still have the opportunity to rebut Mylan's prima facie case of obviousness in a district court trial. Here, the Federal Circuit acknowledged that just because compounds have similar structure or function does not mean that they necessarily have similar properties. Perhaps the quaternary amine having a methyl group present on methyl naltrexone will impart properties to it not present on either of the compounds presented by Mylan.

The case is remanded back to the district court leaving room for Valeant to present those potential unexpected results, or demonstrate how the art may teach away from its own claim 8.