by Richard P. Gilly and Gregory Winsky
Archer & Greiner P.C.
Your LinkedIn Connections
with the authors

Almost seven years ago, Congress passed the American Invents Act ("AIA") that markedly changed the landscape of both substantive and procedural patent law in the United States. One of the major changes concerned challenges by third parties to issued patents, which challenges would be heard at the United States Patent and Trademark Office ("USPTO") under what is called inter partes review ("IPR").

IPR is a trial proceeding conducted at the USPTO's Patent Trial and Appeal Board ("PTAB") to review the patentability of one or more claims in an issued patent based on third party challenges, but only on the grounds of anticipation (novelty) or of obviousness, and then only with respect to prior art that was to be found in patents or printed publications. This week in its decision in the case of SAS Institute, Inc. v. Iancu, the United States Supreme Court decided an important aspect of procedure in IPR cases holding that once an inter partes review is instituted by the Director of the USPTO, the PTAB must decide the patentability of all of the claims challenged.

Why is this important?

First, the background: Complementsoft obtained US Patent 7,110,936 on a System and Method for Generating and Maintaining Software Code ( with its first page shown below) having sixteen issued claims. 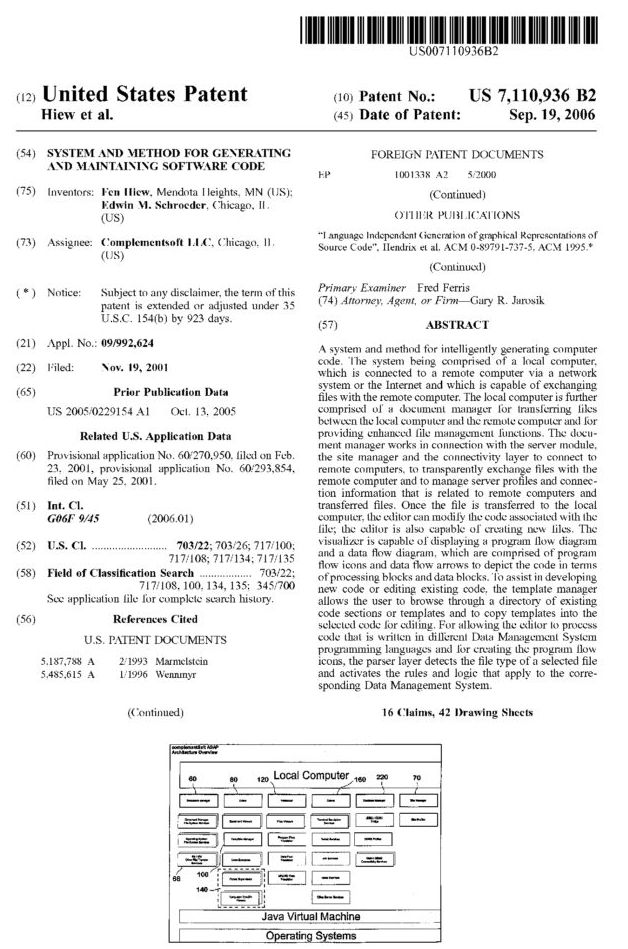 SAS challenged all sixteen claims, and the USPTO Director found a "reasonable likelihood that [SAS] would prevail with respect to at least one of the claims challenged" as the IPR statute requires, but chose to institute review on only claims 1 and 3-10 of the '936 Patent. In the IPR proceeding, the PTAB found eight of these nine claims unpatentable; SAS appealed, saying that the USPTO Director lacks discretion to institute review of only some of the claims challenged, once the reasonable likelihood has been established. Justice Gorsuch, writing for the majority of the Court, agreed, saying;

"When the Patent Office initiates an inter partes review, must it resolve all of the claims in the case, or may it choose to limit its review to only some of them? The statute, we find, supplies a clear answer: the Patent Office must 'issue a final written decision with respect to the patentability of any patent claim challenged by the peti¬tioner.' 35 U. S. C. §318(a) (emphasis added). In this context, as in so many others, 'any' means 'every.' The agency cannot curate the claims at issue but must decide them all."

The importance of this holding lies in the concept that IPR review, as envisioned by the AIA with its one year (extendable to 18 months) deadline, was to be a rather quick way for those challenging issued patents to get complete determinations as to whether one, some, or none of the issued claims are patentable. And certainly IPR was to be a quicker, and possibly less expensive, procedure for such determinations than through federal court litigation.