Recently patent practitioners and US Patent Office (PTO) examiners received additional, and much needed, guidance for determining whether certain types of inventions are eligible for patent protection. This came on December 14, 2014 by way of the PTO's long-awaited "2014 Interim Guidance on Patent Subject Matter Eligibility" (Interim Guidance).1 Not surprisingly, the Interim Guidelines are controversial. They have been the topic of much discussion within the IP community, both in Silicon Valley and across the country.  While some are pleased, others do not welcome the further clarification because they think that the law should speak for itself.

The Interim Guidance generally seeks to clarify how examiners should determine patent eligibility, supplementing the June 25, 2014 Preliminary Examination Instructions issued in view of Alice Corp.2 The Interim Guidance also supersedes a controversial set of guidelines issued March 4, 20143 in view of Mayo4 and Myriad5.

Among other details regarding subject matter recently analyzed by the United States Supreme Court and the Court of Appeals for the Federal Circuit, the Interim Guidance affirms that inventions involving software and life sciences can be patent eligible. As with all the major changes at the PTO of late, the PTO requested public input. The deadline for written comments is March 16, 2015, and the PTO will hold an Eligibility Forum today, January 21, 2015, broadcast on the internet6, in which Dentons' IP team will participate by representing the ABA Section of Intellectual Property Law and its policy.

The Interim Guidance and the tectonic shift in the case law affect all stakeholders, and thus it is imperative to thoroughly understand the current case law and consider weighing in on the Interim Guidance by commenting or taking other steps to influence legislative change on these important issues. 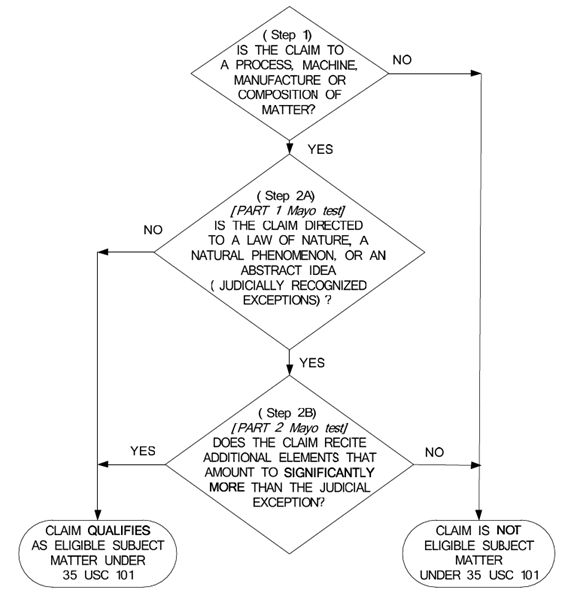 For part one of the Mayo test, the Interim Guidance includes helpful lists of patent-ineligible concepts based heavily on recent Supreme Court and Federal Circuit case law:

Similarly, for part two of the Mayo test, the Interim Guidance provided non-specific examples of what does constitute "significantly more" than an abstract idea:

The examples of what does not constitute "significantly more" simply reiterated the established case law:

The PTO is currently formulating additional, unique examples of patent-eligible subject matter, and stakeholders can contribute suggestions for the final guidelines.  Kevin Greenleaf of the Dentons Intellectual Property and Technology Group chairs the ABA Section of Intellectual Property Law's Committee on Patent System Policy Planning, assisting in defining the Section's policy on 35 U.S.C. § 101 and other issues. He and the Dentons team are available to work with clients and others to draft comments in response to the Interim Guidance. There is a March 16, 2015 deadline for submitting comments, and the PTO will receive comments from any stakeholders during that period.

The Supreme Court made tumultuous changes to patent eligibility, and stakeholders currently have an opportunity, beyond responding to PTO office actions, to assist the PTO, courts and Congress in navigating this complex and important area of law as it is developed. Significantly, the time to act is now, as all the major IP associations, interested stakeholders and Congress are currently considering patent eligibility, and providing comments is an effective tool to participate in the process.

6.The WebEx is from 1pm – 5pm EST at http://www.uspto.gov/patents/law/exam/interim_guidance_subject_matter_eligibility.jsp.

8.The PTO published additional examples of "nature-based products" on its website: http://www.uspto.gov/patents/law/exam/mdc_examples_nature-based_products.pdf.