Okay, let's get this out of the way up front. The answer is maybe... but only with a lot more work and with substantially reduced claim scope.

The United States Food and Drug Administration (US FDA) approved the first monoclonal antibody in 1986.  Since that time, therapeutic antibodies have been on a meteoric rise becoming the predominant class of new drugs developed with the US FDA approving its 100th monoclonal antibody in mid-2021.  Therapeutic antibodies dominate the global drug sales market for non-COVID treatments with Humira (AbbVie), Ketruda (Merck), Eylea (Regeneron), Opdivo (Bristol-Myers Squibb), and Stelara (Johnson & Johnson) leading the way. The global therapeutic monoclonal antibody market was valued at approximately $115.2 billion (USD) in 2018, $150 billion by the end of 2019 and is expected to reach $300 billion by 2025. (see Lu et al. Journal of Biomedical Science volume 27, Article number: 1 (2020)).

With such promise as an effective drug (and, let's face it, as a money maker), drug makers are quickly turning to mAb treatments for COVID-19.  As of December 16, 2021, the US FDA granted Emergency Use Authorizations (EUAs) for three anti-SARS-CoV-2 mAb products.  Although not yet approved by the US FDA, the EUAs permit the use of these anti-SARS-CoV-2 mAb products for treatment of mild to moderate COVID-19 in non-hospitalized patients with laboratory-confirmed SARS-CoV-2 infection who are at high risk for progressing to severe disease and/or hospitalization and also permits two of these anti-SARS-CoV-2 mAb products for post-exposure prophylaxis for certain individuals who are at high risk of acquiring SARS-CoV-2 infection and, if infected, are at high risk of progressing to serious illness.  As with everything related to COVID-19, developments and evaluations of mAb treatment regimens are ongoing and rapidly developing.

With so much capital investment in therapeutic antibodies, whether mAbs or bispecific antibodies, we would expect strong patent protection.  Here is where the success story hits a brick wall.  The stark reality that faces the drug industry is that many of the existing antibody patents are invalid and it has become harder and harder to obtain patents covering antibodies or treatment methods using antibodies.  I discussed this issue back in October 2020 ( https://www.oblon.com/the-developing-enablement-law-its-impact-on-pharma), but since that time the dark clouds continue to accumulate for therapeutic antibody developers.

Long gone are the days of the "newly characterized antigen" test which provided an exception to the general written description rules at the USPTO for antibody claims.  This (admittedly flawed) test found sufficient written description support for a claim to a genus of antibodies through the disclosure of a newly characterized antigen if the production of such antibodies was conventional or routine.  An example of a fairly typical claim granted prior to 2014 was at issue in AbbVie Deutschland GMBH & Co., KG, v. Janssen. Biotech, Inc., 759 F.3d 1285 (Fed. Cir. 2014):

29. A neutralizing isolated human antibody, or antigen-binding portion thereof that binds to human IL-12 and disassociates from human IL-12 with a Koff rate constant of 1×10−2s−1 or less, as determined by surface plasmon resonance.  (US 6,914,128)

In AbbVie, the CAFC did not address the enablement requirement but tossed aside the "newly characterized antigen" test for written description.  Based on long-standing written description jurisprudence this outcome was not shocking as it is difficult to envision a scenario where it is possible to adequately convey that the inventors were in possession of the full scope of such a claim at the time of the invention as there are potentially millions of sequence variants embraced by this broad scope that may or may not meet the functional limitations.

The CAFC also put a shot across the bow in AbbVie foretelling a very troubling future for therapeutic antibody developers:

Functionally defined genus claims can be inherently vulnerable to invalidity challenge for lack of written description support, especially in technology fields that are highly unpredictable, where it is difficult to establish a correlation between structure and function for the whole genus or to predict what would be covered by the functionally claimed genus. AbbVie  at 1301.

What began as a trickle became a flood as therapeutic antibody claims have been frequently invalidated on both written description and enablement grounds by the District Courts and the CAFC.  Take for example the following CAFC cases in 2021: 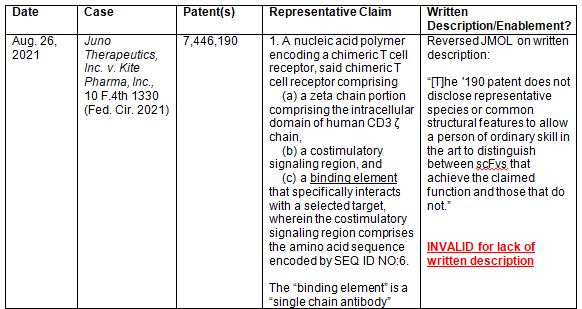 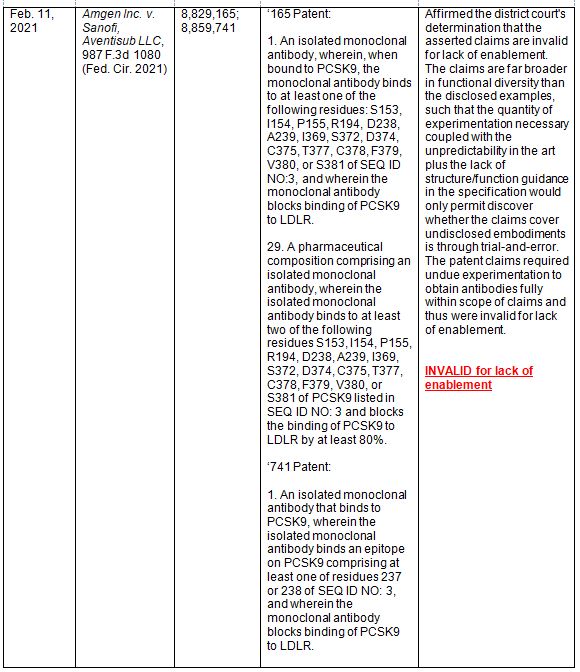 2022 is also off to a similarly rocky start for therapeutic antibodies.

On January 13, 2022, Circuit Judge Dyk sitting by designation in the United States District Court for the District of Delaware, granted Genentech's Summary Judgement motion in Baxalta Inc. v. Genentech, Inc., No. 1:17-cv-00509-TBD (D. Del. Jan. 13, 2022) of invalidity for lack of enablement.  Baxalta's patent (US 7,033,590) claims an antibody that binds to Factor IX, which is a protein that is important for blood clotting.  Perhaps more (economically) important, US '590 covers Genentech's infringing hemophilia drug Hemlibra which had global sales reported to be $1.5B in 2020.

1. An isolated antibody or antibody fragment thereof that binds Factor IX or Factor IXa and increases the procoagulant activity of Factor IXa.

19. The antibody or antibody fragment according to claim 4, wherein the antibody is a humanized antibody.

That Judge Dyk held these broad, functional claims to lack enablement is not at all surprising following Amgen Inc. v. Sanofi.  Judge Dyk also echoed some of the themes from past CAFC decisions invalidating antibody claims calling the field of antibodies "inherently unpredictable."  As has become a common theme, Judge Dyk was critical of the guidance proffered by the specification as to how to identify antibodies that will satisfy the claim limitations and pointed out that the description does not provide "what structural or other features of the disclosed antibodies cause them to bind to Factor IX/IXa or to increase the procoagulant activity of Factor IXa."  Judge Dyk further expressed concern that the only way to practice the teachings of the patent is by "trial-and-error; i.e., by screening tens of thousands, if not millions, of candidate antibodies to determine whether they satisfy the limitations of the asserted claims."

Another common thread to AbbVie, Amgen, and Baxalta is the lack of or limited examples compared to the scope of the claimed genus.  The Amgen Court framed the problem this creates under the Wands analysis noting that the scope of the claims encompasses millions of candidate antibodies, and it would be necessary to first generate and then screen each of these candidates to determine whether it meets the functional claim limitations.

What does this all mean?

First, it should be emphasized that most of the recent decisions invalidating therapeutic antibody claims on written description and enablement grounds were for patents granted before or shortly after the decision in AbbVie.  This is likely to remain the case for several more years as the economic value of these patents are only now being realized in many cases.  Further, although the decision in AbbVie should have steered applicants and practitioners in the right direction (i.e., away from claiming antibodies based solely on the target antigen, specific epitope, and/or function), many of the patents that were granted in the first two or three years after AbbVie were written before this decision and may very well lack the necessary components to satisfy a heightened requirements.  Accordingly, it is very likely that the patentability story for therapeutic antibodies will get worse before it gets better.

The challenge that faces applicants is to accept that far more details and examples are needed in the specification to support any claim breadth.  Even then the scope of the antibody will be substantially limited compared to what was previously granted.  Some have suggested that the scope of therapeutic antibodies that will survive is just those that have been explicitly described in the specification.  But, should this be the case?

Generally, the answer should be "no".  The literature is well developed with respect to the structure, function, and sequence of the constant regions for light and heavy chains of the various immunoglobulin types.  So is it really fair to take the position that applicants cannot describe or enable variation of the framework structure without providing substantial examples or description?  In fact, even humanization of the constant regions has become more and more trivial.  Shouldn't we only really care about sequence and structure/function mapping at the antigen-binding interface of the variable region?

Perhaps it pushes it too far to try to broadly claim the variable region based on the antigen or even the epitope to which the antibody binds, but once an applicant is able to map the variable region sequence and/or structure it should be able to obtain some scope of protection beyond the exemplified antibodies.  Herein lies the challenge for the next generation of therapeutic antibody applications.  What degree of description is necessary?  How many representative examples are needed?  Can applicants use theoretical models and/or artificial intelligence to generate and disclose candidate sequences?

We shall see how this important area of patent law develops, but do not lose hope based on the recent therapeutic antibody decisions.  After all, as Thomas Fuller once wrote "It is always darkest just before the Day dawneth."