United States: None Of Us Saw Them Stop The PTA Giveaway

The District Court for the Eastern District of Virginia granted Acting PTO Director Hirshfeld's motion for summary judgment. The PTO correctly determined that § 154(b)(1)(C)(iii) does not apply "when a patent issues after a district court 'reversed a rejection of a pending claim, but does not explicitly address a provisional rejection of the same claim.'" Sawstop II, 2021 WL 2021122, at *5.

The term of a patent may be extended by Patent Term Adjustment (PTA) to account for delays in prosecution that were not caused by the applicant. Three categories of delay that lead to PTA are:

With respect to C-Delay, "the term of the patent shall be extended 1 day for each day of the pendency of the review" by Patent Trial and Appeal Board (PTAB) or a Federal appeals court if "the patent was issued under a decision in the review reversing an adverse determination of patentability." Id. at § 154(b)(1)(C)(iii).

According to the PTO, C delay arising from appellate review begins "on the date which jurisdiction over the application passes to the [PTAB or a Federal court]" and ends "on the date of a final decision in favor of the applicant by the [Board] or by a Federal Court." 37 C.F.R. § 1.703(e). "A 'final decision in favor of applicant' is understood to include any final decision of the [PTAB] or Federal court that reverses all of the rejections of at least one claim (without subjecting the claim to a new rejection)." Changes to Implement Patent Term Adjustment Under Twenty Year Patent Term; Final Rule, 65 Fed. Reg. 56366-01, 56376 (Sept. 18, 2000).

The Federal Circuit has also forged boundaries for obtaining C delay. For instance, in Chudik v. Hirshfeld, 987 F.3d 1033 (Fed. Cir. 2021), the court held that C delay PTA excludes time spent pursuing a reversal of a rejection when, "because of an examiner reopening of prosecution [after applicant filed a Notice of Appeal in the PTAB], no such decision is ever issued." Id. at 1035.

But why does all this matter? Because the clock for patent term begins at the first non-provisional filing, the amount of time spent prosecuting a patent application—as well as appealing an adverse decision by the Examiner, the PTAB, or a federal court—may impact a patent owner's monetization potential of the issued patent. To a large tech company or a pharmaceutical company, one day of patent protection for a successful commercial product could generate millions of dollars in revenue. Patent applicants should remain diligent during prosecution and minimize activity that could reduce patent term or reduce PTA.

The procedural history in Sawstop II is illustrated below: 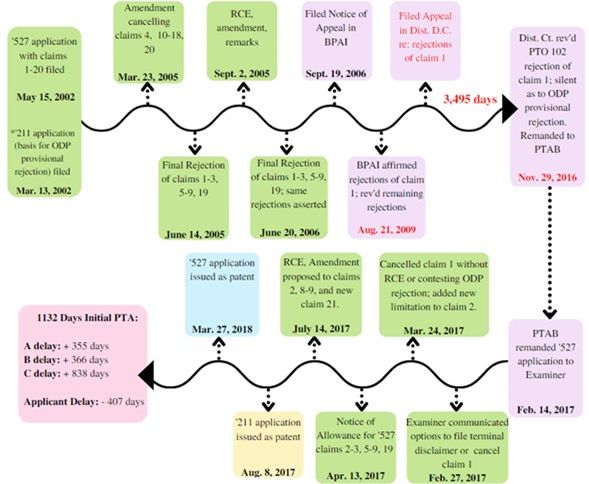 The Board remanded the Band Saw Application to the examiner, who found that further action on the application was necessary due to the outstanding provisional obviousness type double patenting rejection of claim 1. The examiner gave Sawstop thirty days to file either: (1) an appropriate terminal disclaimer, or (2) an amendment cancelling claim 1 and converting dependent claim 2 to independent form. Id. at *3. Instead, Sawstop filed an amendment cancelling claim 1 and incorporating its limitations and some new limitations into claim 2. Sawstop "did not request further examination in light of the [D.C. District Court's] decision, or otherwise contest that as drafted, claim 1 was properly rejected for obviousness type double patenting." Id. In April 2017, the examiner issued a Notice of Allowance for the remaining claims of the Band Saw Application. Several months later, in July 2017, Sawstop filed another RCE and Amendment, but Sawstop "did not request further examination on former claim 1 or attempt to reinstate it as an independent claim." Id. In August 2017, Sawstop's Co Pending Application issued as a patent. In March 2018, claims 2–3, 5–9, and 19 of the Band Saw Application issued as U.S. Patent No. 9,927,796 ("the Band Saw Patent"). The Band Saw Patent was awarded 1,132 days of PTA: 335 days for A delay, 366 days for B delay, and 838 days for C delay, reduced by 407 days of applicant delay.

In April 2018, Sawstop filed an Application for Patent Term Adjustment, requesting a total of 3,792 days of PTA—including 3,495 additional days under § 154(b)(1)(C) for the time spent on appeal to the D.C. District Court. The PTO rejected this request because the D.C. District Court "did not reverse all the rejections of claim 1." Id. at *4. Sawstop then requested either reconsideration of the PTO's conclusion or issuance of a final director's decision permitting judicial review under 35 U.S.C. § 154(b)(4).

In October 2020, the PTO issued a final director's decision permitting judicial review, stating that C delay PTA may be granted only if both "(1) [t]he decision reverses all the rejections of the claim, and (2) [t]he decision does not subject the claim to a rejection." Id. at *4. Sawstop appealed to the District Court for the Eastern District of Virginia ("the Court"), arguing that the Director "incorrectly interpreted the phrase 'decision in the review reversing an adverse determination of patentability'" in requiring that the decision reverse all rejections of a given claim. Id. at *5.

The Court, in a decision authored by Judge Brinkema, affirmed the PTO's decision denying PTA for the appeal to the D.C. District Court of the Board's rejections to claim 1, since that appeal did not result in explicit reversal of both rejections of claim 1.

First, because the D.C. District Court did not reverse—or even address—the Board's provisional obviousness double-patenting rejection, its decision did not "revers[e] an adverse determination of patentability" of claim 1 as required under § 154(b)(1)(C)(iii). Id. at *6. Thus, claim 1 was still subject to a rejection "both before and after" the D.C. District Court's decision, and it therefore remained unpatentable. Id. On this point, Sawstop argued that the double patenting rejection "was not a ground for unpatentability" because it was provisional "unless and until" the Co Pending Application issued as a patent. Id. at *6. The Court rejected this argument because, although provisional rejections can be "obviated," Sawstop took no measures to do so. Id. Because the D.C. District Court reversed only one of two adverse findings against claim 1, its decision did not render claim 1 patentable.

Second, the Band Saw Patent did not issue "under the [district court's] decision" as Sawstop cancelled the only claim on appeal. 35 U.S.C. § 154(b)(1)(C)(iii); Id. at *7. The Court applied the Sawstop I holding to this case and rejected Sawstop's argument that the statutory requirement is satisfied by the issue of a patent following post decision prosecution. Id. at *8 ("Just as in Sawstop I, plaintiff here engaged in 'extensive post-decision activity' that undermines any argument that the [Band Saw] patent 'issued under' the district court's decision." (quoting Sawstop I, 496 F. Supp. 3d at 949)).

In this case, following the Notice of Allowance, Sawstop filed an RCE and Amendment, proposing amendments to claims 2 and 8–9, adding new claim 21, and substituting certain drawings. Such activity falls outside PTO regulations permitting C delay PTA when "an application is remanded by a panel of the [Board] prior to the mailing of a notice of allowance and the remand is the last action by [the panel] prior to the mailing of a notice of allowance." Id. at *8 (quoting 37 C.F.R. § 1.702(e) and stating that it "makes clear that a remand by the Board will not be final 'if there is filed a request for continued examination' after the remand"). Because the D.C. District Court's decision did not "explicitly or implicitly" reverse the obviousness type double patenting rejection, it did not "reverse all of the rejections of at least one claim" and the patent did not "issue under" the decision. Id. at *13.